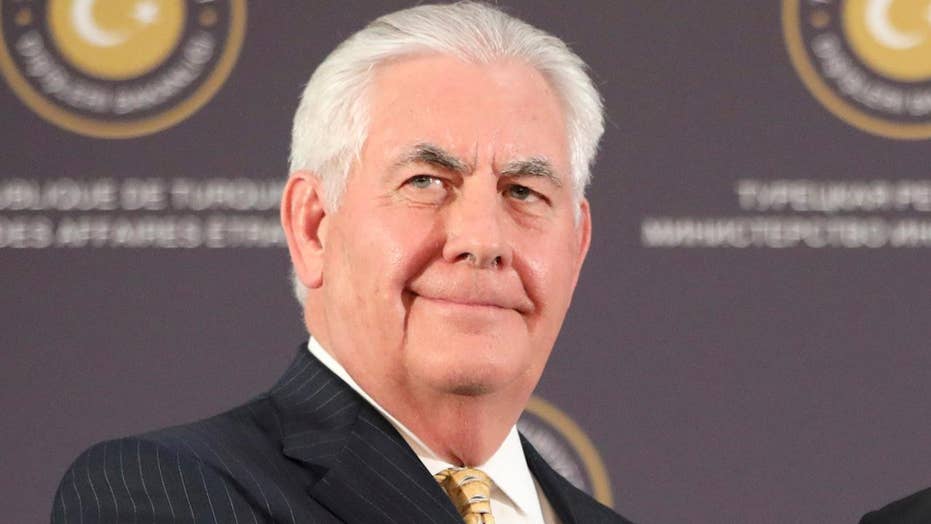 Secretary Tillerson is open to talks with North Korea

Secretary of State Rex Tillerson considers himself a boy scout who is “riding for the brand” – the American people – and is ready to negotiate with North Korean leader Kim Jong Un in an effort to keep the dictator from bombing the United States.

Tillerson told “60 Minutes” Sunday in a rare interview that Kim’s New Year’s boast – that the entire U.S. mainland is within his country’s nuclear strike range – “does make us nervous. It also -- it also stiffens our resolve.”

“That kind of a threat to the American people by a regime like this is not acceptable, and the president's meeting his responsibilities as commander in chief of asking our military -- Secretary [Jim] Mattis at the Defense Department -- to ensure we are prepared for anything,” Tillerson told CBS’ Margaret Brennan.

Secretary of State Rex Tillerson says military options are on the table in case he fails in diplomacy efforts with North Korean dictator Kim Jong Un.

Tillerson said the military options are on the table “in case I fail” at a diplomatic solution, and he is working with Chinese officials to avoid a conflict with North Korea. Tillerson said that until Kim is ready to negotiate, the United States will keep pressure on the regime with economic sanctions.

But the United States is not dangling a carrot to make North Korea talk. “We're using large sticks, and that is what they need to understand. This pressure campaign is putting -- is having its bite on North Korea, its revenue streams. It's having a bite on its military programs,” Tillerson said.

“I'm here to serve my country. I committed to this president. My word is my bond. I ride for this brand."

He continued: “Our diplomatic efforts will continue until that first bomb drops. My job is to never have a reason for the first bomb to drop. And we don't know precisely how much time is left on the clock.”

In addressing his own personal credo, Tillerson, who became an Eagle Scout at 14 and says the scouting program “really shaped who I am,” follows “the Code of the West.”

He explained: “As the West was unfolding, there wasn't a lot of law enforcement, and people basically relied upon each other's word and ‘as my word is my bond.’ And I've used that throughout my life as well, even at ExxonMobil. I would sit down with the head of state for that country or the CEO of that company, and we'd look each other in the eye, and I'd say, ‘All I need to know is that you're going to live up to your side of this deal, and I give you my word I'll live up to my side of this deal.’ And then a lot of the Code of the West was people were very loyal to their organizations. And the phrase ‘riding for the brand’ is a phrase that's always stuck with me . . .

“The State Department, the United States Government, the American people are my brand,” said the native Texan, invoking the tradition of loyalty among cowboys.

Tillerson addressed how often he speaks with President Trump – “every day even if it's only for a few minutes” – and the former ExxonMobil CEO with no prior government experience says he had no idea Donald Trump was interviewing him when he showed up at Trump Tower in New York City to speak to the president-elect in December 2016.

“We met in his office in Trump Tower, and he just began by asking me, ‘Why don't you just kind of talk about how you see the world.’ So we just – we walked around the world for about an hour,” Tillerson recalled. “And then after that, then he kind of went into a little bit of a sales pitch with me and said, ‘I want you to be my secretary of State.’ And I was stunned.”

Tillerson laughed as he said he had no idea it was a job interview, and thought he was just going to share some ideas with the then-president-elect, just as he had previously done with President George Bush and President Barack Obama.

Pushing aside reports that he will step down – “the only person that knows whether I'm resigning or not is me” – Tillerson offered what he would like the American people to know about their secretary of state:

“I'm here to serve my country. I committed to this president. My word is my bond. I ride for this brand. That's why I'm here, and nothing anybody else says is going to change that.”