Schiff sought to determine whether the FBI continued counterintelligence investigations or if they had concluded. The FBI, according to the California Democrat's assessment, only gave "generic statements of process," Newsweek reported.

"We are determined to get answers, and we are running out of patience. If necessary, we'll subpoena the director and require him to come in and provide those answers under oath," he also said.

He added that current FBI answers aren't "going to cut it."  "If there are ongoing counterintelligence investigations involving people around the president, they must inform us. We're going to use whatever compulsion is necessary to get those answers," he said.

His comments came amid a committee hearing that was one of many Democrats used to further probe Special Counsel Robert Mueller's findings in the Russia investigation.  Schiff's hearing specifically focused on reported contacts between Trump associates and Russia.

Although Mueller's report didn't conclude the campaign conspired with Russia, it reported a number of findings that raised Democratic concerns. 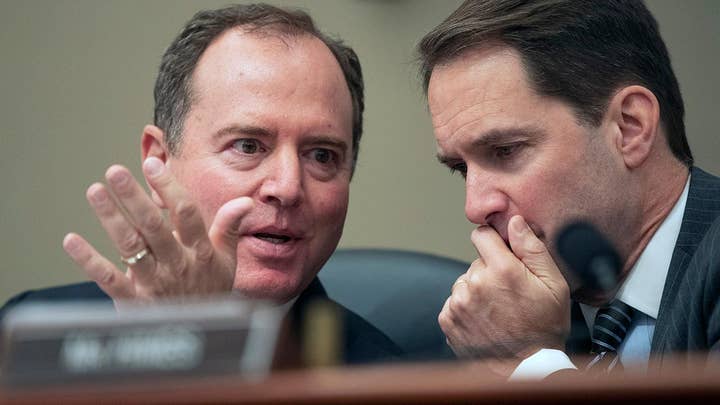 “Nevertheless and contrary to the president’s often-repeated mantra and many misrepresentations of the attorney general," Schiff said on Wednesday, "the special counsel reached no conclusion as to whether the Trump campaign’s many Russian contacts constituted collusion since that term is not defined in criminal law.”

Mueller's report, Schiff said, also showed that Trump welcomed Russian support. “It establishes that the Trump campaign welcomed the Russian interference because it expected to benefit electorally from the information stolen and released through the Russian effort," he said.

ALAN DERSHOWITZ: 'THE MUELLER REPORT SHOULD NEVER HAVE BEEN WRITTEN'

Should Schiff decide to subpoena Wray, it would be the latest attempt to force the Trump administration into providing more information on issues related to the Russia investigation. Trump has responded by blocking subpoenas through executive privilege on a host of issues -- prompting Democrats to consider resolutions holding current and former administration officials in contempt.

Schiff has frequently derided Barr for refusing to cooperate, saying, for example, that he's unworthy of the "attorney general" title. He also pressed the intelligence community for more information related Barr's investigation into the Russia probe's origins. Trump, Schiff said, endangered national security by granting Barr the power to declassify information related to the investigation.