Sen. Bernie Sanders is making changes to his signature policy proposal, "Medicare-for-all," in order to address union concerns that a shift to single-payer health care could force members to give up hard-fought insurance plans for nothing in return.

According to the Vermont senator's presidential campaign, the change would give union workers the ability to bargain for “wage increases” or other benefits to make up for any reductions in the cost of their health care plans.

“We’d call it an addition for unions,” Sanders campaign manager Faiz Shakir told Fox News on Thursday during a stop in Manchester, N.H.

But the Sanders campaign is pushing back against claims that the change amounts to a carve-out or concession for unions. And they’re insisting the change still won’t allow for private insurance to coexist alongside a government-run single-payer system. 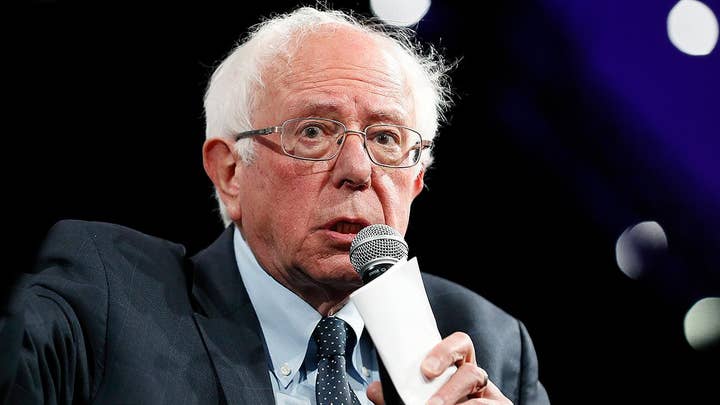 Shakir emphasized that “unions have properly and rightly earned great victories on the health care front for their workers” before addressing the question that faced his campaign: “What do you do about the fact that you’re going to bring about Medicare-for-all, including union members, that are going to reduce the costs of health care for them?”

Shakir said that the Sanders plan will now allow union workers “to re-enter into contract negotiations ... to say when the costs go down for you on health care, as they will, then those costs should be reapplied in the form of wage increases or other benefits to the workers and they shouldn’t be pocketed by employers. They’re doing well enough already.”

And he touted that “we need to make sure that over the course of transition to Medicare-for-all, that those cost savings are being applied in the form of wage increases. Workers have not seen wage increases for 40 to 50 years and one of the reasons for that – health care. Now you’re going to change the health care system and now they’re going to see wage increases.”

The campaign said that unions could renegotiate their contracts under the supervision of the National Labor Relations Board.

The announcement of the tweaking of the plan came Wednesday, as part of the senator’s wide-ranging proposal to double union membership and give workers the right to strike without the fear of their jobs being filled by replacement workers. His proposal also calls for ending so-called "right to work" laws favored by Republicans and decried by organized labor for weakening a union’s ability to negotiate contracts.

The progressive senator’s campaign is taking issue, meanwhile, with a Washington Post report on the agreement.

“This doesn’t change anything,” Shakir claimed, and pushed back on the report's suggestion that the agreement would allow for private insurance.

During his 2016 bid for the Democratic nomination, the populist senator helped elevate the idea of a government-run Medicare-for-all system that would eliminate private insurance from the fringe to a mainstream issue among Democrats.

Now, many of Sanders' rivals running for the Democratic nomination are also pushing single-payer plans. But the Sanders campaign argues that theirs is the purest form of Medicare-for-all.

And they’ve been critical of another top-tier contender – Sen. Kamala Harris of California – for allowing private insurance to co-exist with a government-run system in her proposal.

The Harris campaign took aim at Sanders on Wednesday amid reports on the union agreement. Communications director Lily Adams tweeted, “Oh how interesting. I thought no one was allowed to make any changes to Medicare for All plans at all ever.”

The Republican National Committee took aim at both Sanders and Harris, writing on Thursday that "at this point, Sanders and Harris should launch the International Brotherhood of Health Care Flip-Floppers union."

Former Vice President Joe Biden – the front-runner in the 2020 Democratic nomination race – criticized Sanders and fellow progressive standard-bearer Sen. Elizabeth Warren over their support for Medicare-for-all during a speech Wednesday to organized labor at the Iowa AFL-CIO.

Biden, the only top-tier contender who opposes the single-payer system, told the audience: “You’ve negotiated really hard for your benefits — with your union, with the employer. In my plan, you get to keep it. You don’t have to give it up.”

Sanders and Warren faced jabs during last month’s second round of Democratic presidential primary debates by some of the lower-tier candidates for their health care plans — with some arguing that union members would lose their current health care coverage under a single-payer system.

One of those critics made the same case in Iowa on Wednesday.

Speaking prior to Biden, former Rep. John Delaney of Maryland said that “a lot of workers in this country have worked real hard to get good health care, often through their union and many of them like it. And we should not be running on a policy of taking away that union health care which you've paid for and you've made sacrifices to get.”

Asked Thursday about the move by Sanders, Delaney told Fox News "I think he caved to common sense."

Another candidate that blasted Sanders and Warren during the July debate over the issue was Rep. Tim Ryan of Ohio. He described the announcement by Sanders as a "concession."

"I'm glad he made it," Ryan told Fox News on Thursday.

Neither Sanders nor Warren specifically discussed Medicare-for-all during their speeches Wednesday to the Iowa union confab.

Asked why Sanders didn’t highlight his tweak his plan to allow unions to negotiate for higher wages, Shakir said, “There’s some conversations we’re attempting ... to have privately with union leaders to get into the details of it so they have an opportunity to hear from him first, so that’s just a tactical matter. We are talking to a lot of union leaders.”

And he emphasized that “most of the unions in this country … are very supportive of Medicare-for-all. They just want to know what’s going to happen to those of us who’ve been negotiating and have gotten some health care changes.”

Sanders, speaking with reporters after his Wednesday speech, noted that “we are talking to the unions, obviously. You’re looking at perhaps the strongest pro-union member of the United States Congress; we’re going to work with unions on this issue.”