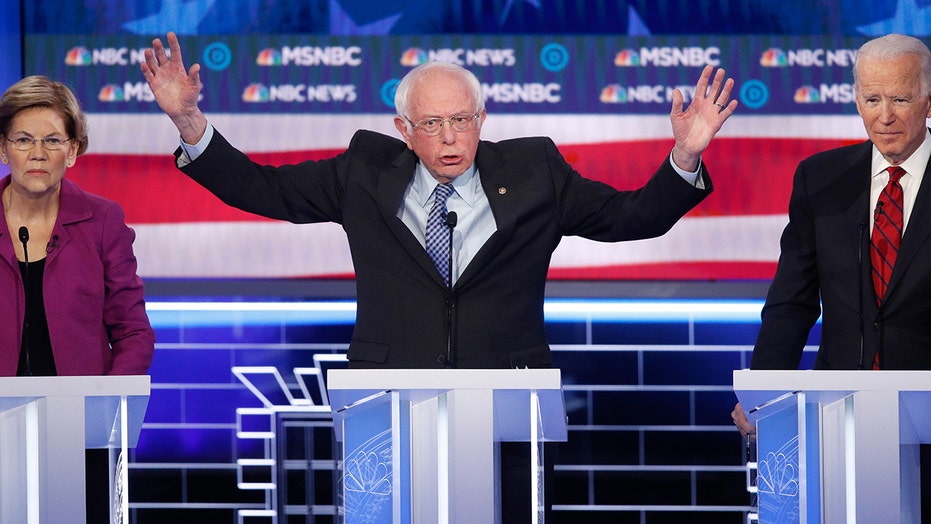 Democrats make final push in Nevada ahead of caucuses

Nevada could make or break some campaigns; Jacqui Heinrich reports from Las Vegas.

LAS VEGAS – The White House race has moved west to Nevada, where the electorate is much more diverse, but Sen. Bernie Sanders is aiming for the same result -- a repeat performance of his victory in last week’s New Hampshire primary.

Looking out at a crowd of more than 2,000 supporters at a caucus eve rally Friday night, the populist senator from Vermont -- who’s making his second straight White House run -- touted his win in New Hampshire and his edge in the raw vote totals in Iowa’s caucuses earlier in the month, and did what many people do in Nevada: He calculated his odds.

“If we come out in big numbers …. I think we’re going to win here as well,” he said.

Sanders then emphasized his campaign’s ground game in the state.

“In Nevada we’ve had volunteers knocking on hundreds of thousands of doors. I just came back from California two hours ago. They’re close to a million doors that they’ve knocked on."

It's a strategy his campaign is using nationwide, he added: "We’re knocking on doors in Texas and in Massachusetts and all across this country.”

Sanders is expected to win again in Nevada. While it’s difficult to poll in the Silver State, an average of the most recent surveys in the Democratic caucus suggests Sanders holds a double-digit lead his closest competitors.

That means the real battle in Nevada is for second place, with an average of the polls giving former Vice President Joe Biden a slight edge over former South Bend, Ind., Mayor Pete Buttigieg and Sen. Elizabeth Warren of Massachusetts.

In 2016, eventual Democratic nominee Hillary Clinton edged out Sanders in the Nevada caucuses – thanks in part to her strong support among the state’s Latino and African-American voters. But this time around Sanders and his campaign have made a concerted effort to reach out to minority voters here.

Democratic presidential candidate Sen. Bernie Sanders of Vermont speaks to supporters at a rally on the eve of the Nevada caucuses, in Las Vegas, on Feb. 21, 2020. (Fox News)

If the self-proclaimed democratic socialist ends up winning in Nevada, it will send chills down the spines of moderate and establishment Democrats, who are terrified that a Sanders nomination will result not only in a November general election loss to President Trump, but also serious setbacks in down-ballot races.

Those concerns help boost the hopes of Sanders' Democratic rivals.

Buttigieg came in a closer-than-expected runner up to Sanders in New Hampshire. The candidate sounded confident Friday as he weighed his Nevada chances.

“I think we’re going to have a lot to celebrate tomorrow,” he said, speaking to supporters at a campaign field office in northeastern Las Vegas. “I think tomorrow’s going to be a fantastic day.”

Buttigieg reminded volunteers who are canvassing and door-knocking for his campaign that their efforts were urgently needed.

“People are still making up their minds," he told them. "Everything depends on making sure that we reach them. Not everybody’s been following this thing for a whole year. Some folks are just tuning in.”

Wind at Warren's back

If anybody’s on a roll, it’s Warren.

Thanks to breakout debate performance Wednesday night – when she showed no mercy in taking down 2020 rival Mike Bloomberg – the progressive senator from Massachusetts is hauling in much need campaign cash and has the wind at her back heading into caucus day.

On the eve of the caucus, Warren stressed she can beat Trump in November.

"If anyone doubts whether or not I can fight him on a debate stage, I think we have the video from Wednesday!” she said.

After disappointing third- and fourth-place finishes in Iowa and New Hampshire, a strong finish in Nevada is a necessity for Warren.

That’s also the case for Biden – who came limping into Nevada following lackluster fourth- and fifth-place showings in Iowa and New Hampshire. The former vice president is banking on a solid finish in Nevada to propel him into his firewall state of South Carolina – which holds its primary in a week.

Biden told reporters Friday that he’s feeling “good” but added that there are a “lot of complications" to deal with.

"And I don’t mean voting," he said. "I mean in terms of getting everything in the right place and the right time.”

While many of her rivals were campaigning in Las Vegas on Friday, centrist Democratic Sen. Amy Klobuchar of Minnesota stumped in the more conservative northern part of Nevada – with stops in Elko and Reno.

Thanks to a strong debate performance in New Hampshire that propelled her to a solid third-place finish, Klobuchar has seen a surge in fundraising, which she says helped her get her message out to Nevada voters.

“We raised $12 million since the New Hampshire debate and that allowed us to run ads throughout Nevada and it helped us to build our staff,” she said.

But Klobuchar – like Buttigieg – has struggled to resonate with voters of color – which presents challenges now that Iowa and New Hampshire are in the rear-view mirror.

Tom Steyer has invested a lot of time and money in Nevada – as he’s focused his outreach on black and Latino voters. The former hedge fund manager-turned-billionaire environmental and progressive advocate’s ads are flooding the airwaves and his billboard ads are popping up everywhere.

Fox News asked Steyer where he needs to finish in Nevada’s caucuses and the Feb. 29 primary in South Carolina.

“I don’t think there’s an exact number," he said, "but I’ve got to show that I can put together that diverse coalition.”

Bloomberg - who faced the debate spotlight glare Wednesday -- is not on the ballot in Nevada. Even before entering the race less than three months ago, the billionaire media mogul and former New York City mayor decided to skip the four February races and instead concentrate his efforts and resources on Super Tuesday, March 3, when voters in multiple delegate-rich states head to the polls.

Also on the line besides the candidates is the reputation of the Nevada Democratic Party.

On the eve of the caucuses,  party officials abandoned plans to use a Google application to transmit the caucus results from the precincts across the state to the party headquarters.

Instead, the state party on Friday said it will rely on traditional reporting by phone amid fears of tech problems that led to a reporting debacle earlier this month in the Iowa caucuses.

And the Democratic National Committee cautioned it couldn’t guaranteed that results from Saturday’s caucuses would be reported Saturday.