SAN JUAN, Puerto Rico -- The mayor of Puerto Rico’s largest city became an international star when she donned a T-shirt and baseball cap and begged for help after Hurricane Maria left San Juan in shambles.

And she became a darling of the left when she took aim at President Trump for not doing enough to help her people.

Six months later, constituents of Carmen Yulin Cruz are still struggling for food, shelter and power, and many have turned on the leader who they say turned her global close-up into a never-ending parade of self-promotion.

“If we don’t get food and water into people’s hands, what we are going to see is something close to a genocide,” Cruz told an international audience after Hurricane Maria roared onto the island in September knocking out power and leveling entire neighborhoods in its path.

Her subsequent feud with Trump over recovery efforts turned her into a liberal star. She’s been on numerous national television shows -- including The Late Show with Stephen Colbert -- and scored a high-profile invite to the State of the Union as the guest of New York Democratic Sen. Kirsten Gillibrand.

After the speech, Cruz characterized the president’s pledges of support to Puerto Rico as “hypocrisy.”

But while Cruz’s pitch-perfect soundbites make for good TV, there’s a growing frustration among her constituents who feel forgotten and say Cruz’s personal political ambitions are coming at the expense of the very people she’s supposed to be representing.

She hired extra photographers to follow her around post-storm and is even scheduled to make multiple appearances in Holyoke, Mass., next month.

'It stopped being about us a long time ago.'

“She comes out, goes on television and pats herself on the back,” Simon Menendez, a small business owner in San Juan, told Fox News. “It stopped being about us a long time ago.”

A bartender at a popular hotel in Old San Juan says she feels like a political pawn.

“We get passed around from politician to politician. They use us and think we aren’t smart enough to know,” the woman, who asked not to be identified for fear of retaliation, told Fox News. “It’s insulting.”

Former Puerto Rico Attorney General Jose Fuentes went so far as to call Cruz a “political hack” during a CNN interview and suggested she is using hurricane relief efforts to lay the groundwork for future political bids.

Edwin Melendez, director of the Center for Puerto Rican Studies at Hunter College in New York, calls Cruz an opportunist.

“The impact of Hurricane Maria has created a situation of flux in Puerto Rican politics,” he told Fox News. “Local and federal responses were not up to par in Puerto Rico and that opened up an opportunity for her. She got the spotlight. She took it.” 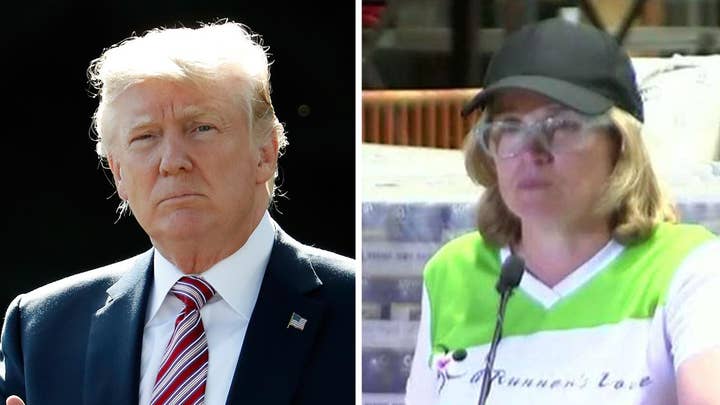 Indeed, Cruz’s public spats with Trump have kept her in the headlines. She’s also used her newfound popularity to target political rivals inside Puerto Rico. Number one on her hit list is the island’s current governor, Ricardo Rossello.

Cruz calls out Rossello every chance she gets for his handling of Maria and his support of the Trump administration.

“She never misses an opportunity,” Menendez said. “A lot of people hate him, too.”

Cruz is widely expected to run for resident commissioner – a non-voting member of the U.S. House of Representatives followed by a gubernatorial bid, Charles Venator Santiago, associate professor of political science at the University of Connecticut, told Fox News.

Resident commissioner is a four-year term and, if elected, would put her in the same orbit as some of the country’s most powerful political heavy-hitters.

That might be great for her personal aspirations, but it’s only upped the frustration from people inside the commonwealth who were already on the fence about her.

Four months before Maria hit, an El Nuevo Dia survey of 1,000 Puerto Ricans found that only 24 percent approved of Cruz’s performance, while 46 percent disapproved. According to the newspaper’s poll, a majority found her to be irresponsible after she backed a national strike in May against looming austerity measures.

She raised eyebrows again after shelling out $12,000 for four photographers to follow her around the island after Maria, taking heroic-looking pictures of her helping residents – many that went viral.

The first contract, dated Sept. 28, was for José Antonio Reyes García and was followed by two others on Oct 1 for Alina de Lourdes Luciano Reyes and Wanda Liz Vega Dávila. The last contract was awarded to Ana María Abruña Reyes on Oct. 11.

All four deals expired on Dec. 31.

The contracts were up to $50 an hour for “professional services” that included covering emergency events, documenting it for the press, photography for special events and documenting special projects and activities for the mayor or her representative, according to Noticel.

Each photographer made his or her own schedule and worked 20 hours a week.

San Juan spokeswoman Carmen Serrano, who refused requests for interviews from Fox News, told Noticel that the photos “are part of our job documenting, with dignity, the disaster not just in San Juan but other areas as well.”

She added that the pictures “served to show the world that things are not back to normal like President Trump likes people to believe.”

Despite the four extra photographers on hand, one of the most widely viewed pictures came from Cruz’s permanent press team.

In it, the mayor is waist-deep and wading through black, muddy water. She’s got a graying megaphone tucked under her left arm and is shaking hands with a young man drifting down a flooded street in a bright yellow kayak.

'She's not going to go into black water up to here just because. She'll say: no, no, no, let's get the cameras.'

The mayor’s publicity-driven photo ops are so over-the-top that they’ve turned into a punch line.

“She’s not going to go into black water up to here just because,” Puerto Rican comedian Roy Sánchez Vahamonde said. “She’ll say: no, no, no, let’s get the cameras.”

Cruz's staff initially agreed to schedule her for an in-person interview with Fox News, but then canceled. Several subsequent efforts to contact the mayor were ignored.