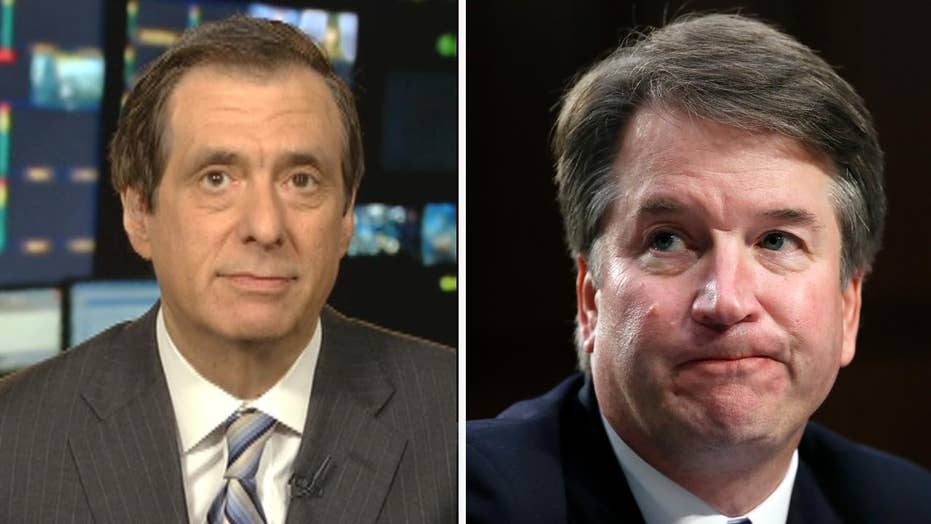 Kurtz: Why the Twitterverse doesn’t wait for the evidence

'MediaBuzz' host Howard Kurtz weighs in on the news media fallout over the Judge Kavanaugh allegations and why people are quick to make assumptions without having any evidence.

One of the depressing aspects of the cultural debate sparked by the accusation against Brett Kavanaugh is that so many politicians, pundits and ordinary people have already made up their minds based on very limited information.

I suppose it was too much to ask that people actually wait for the Supreme Court nominee and for Christine Blasey Ford to testify and see what additional information emerges. That’s no longer the way our hyperpolarized society works.

Still, it is striking to see the absolute certainty with which people on the public stage, and many folks on Twitter, are declaring that either he or she is lying.

It's hardly a coincidence that these conclusions are largely driven by ideology. Democratic pols and liberal commentators, who would love to keep Kavanaugh off the high court, are quickly out of the gate saying they believe Ford, or at least that she is credible enough to potentially sink the nomination. Republican pols and conservative commentators, who would love to see the judge elevated, are backing him and doubting Ford (and, in fairness, the eleventh-hour nature of the allegations).

Most would immediately switch sides if a Democrat was facing such accusations. See Clinton, Bill.

The vagueness of Ford's account is only exacerbating the debate. Ford says she can't remember what year the alleged sexual assault took place — she thinks maybe 1982 — or whose house it was. That makes it very difficult to prove, or disprove, and leaves the possibility of a he said/she said that can’t be resolved.

The political maneuvering is under way. Chuck Schumer demanding that additional witnesses be called, such as Kavanaugh's friend Mark Judge, who was accused of joining in the assault. Lindsey Graham is questioning who paid for Ford's lawyer and her polygraph exam. Republican senators are also carping that Ford hasn't accepted the invitation to testify at Monday's hearing; Mitch McConnell yesterday offered her the option of a closed hearing.

President Trump, for his part, ripped the Democrats for "obstruction" and "resistance," that he feels "terrible" for Kavanagh, and that the FBI does not want to investigate. But he was careful again yesterday not to criticize Ford. “We want to give everybody a chance to say what they want to say,” the president told reporters.

There's already about a million times more interest in the Kavanaugh nomination. Before Ford came forward, there was an intense debate over the degree to which he would move the court to the right, especially on the issues of abortion and presidential power.

But I think much of the public wasn't really engaged, in part because his confirmation seemed to be a foregone conclusion.

Now it's the subject of hot arguments not just on Twitter but in cubicles and kitchen tables. It's reminiscent of the uproar over Anita Hill and Clarence Thomas, but also reminds me of other national melodramas, such as the O.J. trial, where everyone had an opinion even on the minor characters.

I raised the question yesterday about how to balance the damage done to Ford's life, if her story is true, with the fact that this alleged attack occurred when Kavanaugh was at Georgetown Prep. And on MSNBC yesterday, New York Times opinion writer Bari Weiss put it this way:

"Let's say he did this exactly as she said. Should the fact that a 17-year-old, presumably very drunk kid, did this, should that be disqualifying? That’s the question at the end of the day, isn't it?"

A different, and very moving, take comes from the Atlantic’s Caitlin Flanagan, who describes a sexual assault when she was 15, the impact on her life and how she eventually came to a place of forgiveness.

Without giving away too much, Flanagan says she would view the long-ago allegation differently if Kavanaugh had made some attempt at apology, as other men facing #MeToo accusations have. But of course, this isn't a case of a date gone bad.

Kavanaugh flatly denies that anything like this ever happened. So Republican senators would have to be convinced that he is lying to turn against him.

That is a matter for the messy legislative process. The court of public opinion no longer waits for the evidence.