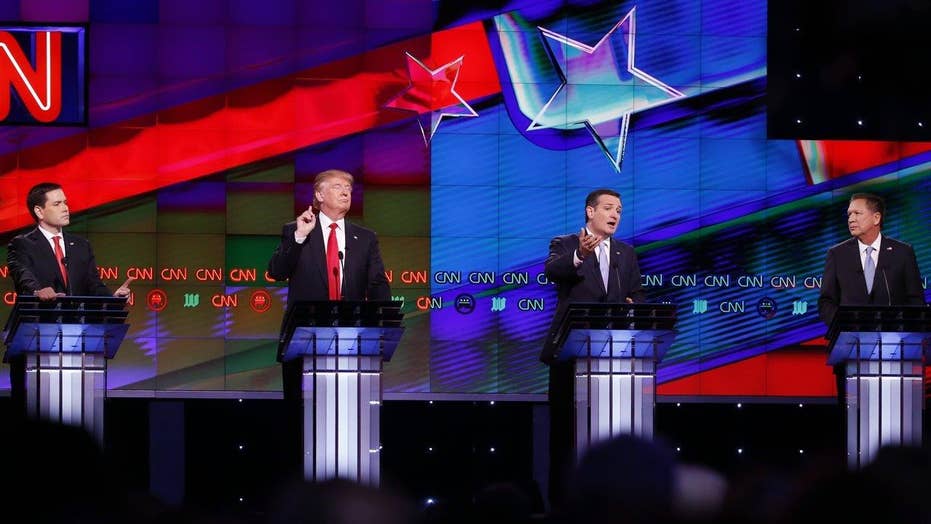 Buzz Cuts:
• Rivals give Trump a pass
• Dispute deepens over Trump rally rough up
• Dubya chief of staff joins #NeverTrump
• Power Play: Can Cruz do it?
• Death to America… and Snickers

RIVALS GIVE TRUMP A PASS
Donald Trump had his best debate so far, and he has Ted Cruz and Marco Rubio to thank for it.

Trump’s campaign has been buffeted for weeks with unfavorable coverage about his business record, allegations of fraud, a lack of transparency and even claims of assault against a senior campaign staffer.

Given the tenor of the political discussion of late, one might have expected that the tone at Thursday’s CNN debate would have been an even more singeing version of what we heard a week prior in Detroit – if only for the increase in combustible material.

Trump must have been ready for the fight of his life against Cruz and Rubio, and clearly came to the stage with a more tentative air. As it turns out, he needn’t have worried. Trump adopted a more presidential-sounding persona and did his best to revert to his early-debate strategy of staying out of the fray whenever possible and his rivals obliged him.

In a campaign that has become a referendum on Trump’s character, Cruz and Rubio didn’t even raise the subject. And that was enough to put Trump in the driver’s seat. Both raised issue-based critiques against Trump and tried to show him up on policy knowledge, but Trump’s supporters have never been demanding on that count.

In Rubio’s case, it seems like he overlearned a lesson. The Florida senator was tut-tutted for making personal insults about Trump – his spray tan, his small hands, etc. That, especially the joke about Trump’s junk, was too much.

But there is a difference between personal put downs and attacks on another candidate’s character.

Trump has managed to run a campaign intentionally short on policy details. He simply makes aspirational statements and then promises to “hire the best people” or be a “great negotiator” to achieve the free border wall, Chinese capitulation on trade or even dealing with ISIS.

(Trump seemed to stumble once in that regard Thursday when he backed the idea of 20,000 or 30,000 U.S. ground troops for the fight against ISIS.)

This election is not about issues. This election is about Trump. And certainly with only days to go before what may be the decisive batch of elections, it’s certainly too late to try to put this contest on another path.

Trump’s supporters want a charismatic, strong leader who will shake up the country. Who wouldn’t? The question before the rest of the Republican Party is whether Trump is actually that person or if he is, as Rubio has previously charged, “a con man.”

His coloring and the size of his digits are not material to that discussion. But his record – especially recent history like Trump University – certainly is.

The absence of those attacks clearly surprised Trump who commented, “So far, I cannot believe how civil it’s been up here.” That’s likely because Trump knew what he would have done as Cruz or Rubio: Go to your enemy’s weakest spot and hit it mercilessly.

Trump did it again and again throughout the cycle only to see his rivals start to learn the lesson. But on Thursday, they forgot what he had taught them.

[Watch Fox: On the heels of endorsing Trump, Ben Carson joins “Your World with Neil Cavuto” at 4 p.m. ET]

Dubya chief of staff joins #NeverTrump - WashEx: “Former President George W. Bush’s White House chief of staff has launched an attack on GOP front-runner Donald Trump, claiming the businessman ‘isn’t fit for the office our former boss held with such distinction.’ In an email to the private Bush-Cheney Alumni list, Josh Bolten also said that a Trump nomination would cripple the Republican Party and kill its standing at the party of limited government. ‘I don't have to tell you how important this election cycle is to the future of the Republican Party, and to our country. I’m writing because I believe that nominating the current Republican front-runner would cost our party its standing as the defender of limited government, constitutional principle, and American leadership — leaving it crippled for years to come,’ he wrote.”

WITH YOUR SECOND CUP OF COFFEE…
On this Friday, we bring you the heartwarming story of the man who people of the Ventana Wilderness in central California refer to as “the last of the mountain men.” The story of Jack English, who discovered his love of the wilderness as a boy when he ran away from home during the Great Depression, is the tale of a man who achieved his dream and lived his life in the simplest and happiest of ways. LAT brings us the story: “Visitors to the valley called him the last of the mountain men, a local treasure. They admired his ability to live out his dream. After years of camping beneath these lofty trees with [English’s son] Dennis and his wife Mary, he bid $11,000 for five acres here and won the deed. In the late 1970s, they proceeded to build a cabin that became a well-known waypoint for day-hikers and overnighters. Eager to offer water from his tap or pancakes from his grill, Jack was quick to share his generosity, cheer and heartfelt aphorisms. ‘Happiness,’ he said, ‘is making other people happy. It’s a darn sight better than making them feel bad.’” English died this month at 97-years-old.

POWER PLAY: CAN CRUZ DO IT?
After months of wishing he wasn’t around, many in the Republican Party has come to see Ted Cruz as their only means to stop Donald Trump from winning the nomination. But can he really topple the Republican frontrunner? Republican message maestro Pete Snyder and Obama administration veteran Douglas A. Smith weigh in with Chris Stirewalt. WATCH HERE.

Fox News Sunday - Mr. Sunday sits down with Republican frontrunner Donald Trump, and with Ohio Governor John Kasich, whose home state is a crucial prize in Tuesday’s elections. Can Kasich win his competitive state? Watch “Fox News Sunday with Chris Wallace” at 2 p.m. and 6 p.m. ET on the Fox News Channel. Check local listings for broadcast times in your area.

[#mediabuzz - Host Howard Kurtz has an interview with Trump and breaks down the week’s media coverage. Watch Sunday at 11 a.m. ET, with a second airing at 5 p.m.]

Power Play: Take a Michigander at this - Tuesday saw a surprising upset on the Democratic side with Hillary Clinton coming in second to Bernie Sanders in a state she was leading in by a wide margin. Democrat Douglas A. Smith and Republican Pete Snyder give their thoughts to Chris Stirewalt. WATCH HERE.

DEATH TO AMERICA… AND SNICKERS
Fox News: “Fifteen tons of Snickers chocolate bars have met a sticky end in Gaza. Islamic Hamas authorities hurled boxes of the peanut chocolate candy bar into a bomb crater Thursday, dousing them with diesel and lighting them in a crackling bonfire following a company recall. Confectionary giant Mars recalled sweets from its Netherlands factory last month after ‘a small piece of red plastic’ was found in a Snickers bar. Three children from a nearby Bedouin encampment managed to snatch some of the chocolate bars before they melted away.”