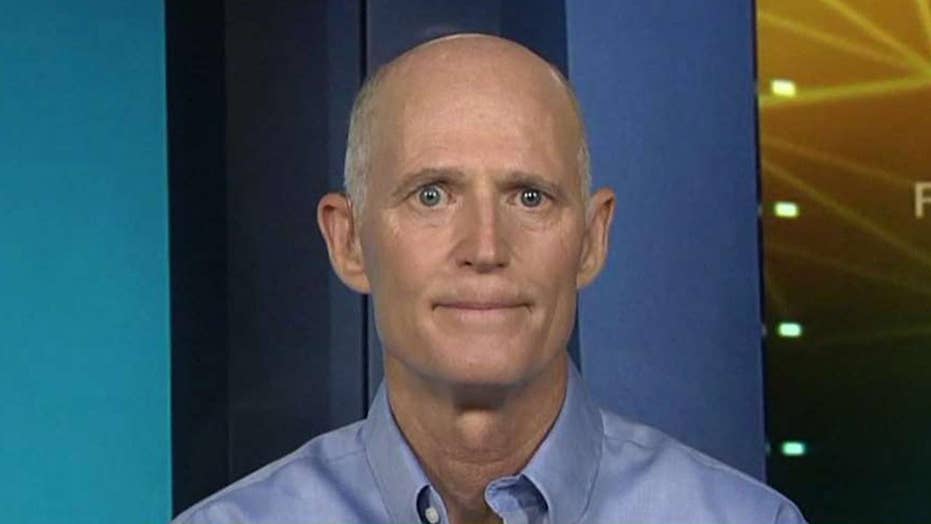 Rick Scott on another vote counting controversy in Florida

Florida Republican Senate candidate Rick Scott insisted Monday he “won the election” while accusing incumbent Democratic Sen. Bill Nelson of trying to “steal” the race from him, amid chaotic recounts in the sunshine state’s Senate and gubernatorial races.

Over the weekend, Florida’s secretary of state Ken Detzner announced there would be recounts in both the Senate race and the governor’s race, noting that unofficial results in both races fell within the margin that by law triggers a recount. But Scott said he's confident his victory won't be overturned.

“I won the election,” Scott told “Fox & Friends” Monday. “I’m going to focus on getting to Washington and getting my agenda implemented.”

On Tuesday, Scott was projected the winner of the Senate race, but Nelson has refused to concede amid the recounts.

“We won. We’re going to win the recount because it’s never been overturned before,” Scott said Monday. “I’m going to Washington as the next Florida senator.”

Scott added: “Bill Nelson is clearly a sore loser. He can’t stand the fact that he’s not going to be elected for, what, the first time in decades. He’s just here to steal the election.”

Meanwhile, Nelson's election lawyer, Marc Elias, said Monday that they would bring a new lawsuit this week to protect ballots that are denied due to "mail/post office delays."

In the Florida governor’s race, Republican candidate Ron DeSantis was announced the winner by the end of Election Day, with his Democratic opponent Andrew Gillum conceding on the night of the election. But by the end of last week, Gillum took back his concession and embraced a recount.

“I am replacing my words of concessions with an uncompromising and unapologetic call that we count every single vote,” Gillum, the mayor of Tallahassee, told reporters Saturday, though saying he is prepared to accept “whatever the outcome of this election so far as every single vote…is counted.”

Both Scott and DeSantis led their races after the midterms on Tuesday, but as the days went on, and more votes were counted, those leads had all but disappeared. Scott’s lead by Saturday afternoon was reduced to 0.15 percent and DeSantis’ was 0.41 percent.

The shrinking leads quickly led to suspicions from Republicans that political shenanigans were taking place in Democratic counties that had yet to complete their vote counts. Democrats, meanwhile, have accused Republicans of trying to stop all votes from being counted.

President Trump on Monday referred to Florida’s election as being “massively infected.”

“The Florida Election should be called in favor of Rick Scott and Ron DeSantis in that large numbers of new ballots showed up out of nowhere, and many ballots are missing or forged. An honest vote count is no longer possible—ballots massively infected. Must go with Election Night!” Trump tweeted Monday.

The supervisor of elections in Palm Beach County, Susan Bucher, told reporters that she did not expect to meet Thursday’s recount deadline in the gubernatorial and Senate races, due to aging equipment.

Florida Department of State spokeswoman Sarah Revell told Fox News, though, that under state law, if a county does not submit their results by the deadline, then the results on file at the time take their place. She added that Florida’s secretary of state has no authority to grant extensions.

“Supervisors of Elections are independent officials and they are responsible for deciding when to upgrade or modernize their equipment,” Revell said.

But Florida is not the only state hanging in limbo from last week. In Georgia’s gubernatorial race, Republican Brian Kemp declared victory, though his Democratic opponent Stacey Abrams refused to concede and filed a federal lawsuit in an effort to force a runoff election.

The Abrams campaign’s lawsuit asked a judge to delay vote certifications in Georgia’s unsettled governor’s race by one day, and block counties from tossing some provisional and absentee ballots that may have minor mistakes on them.

Kemp has said that it is “mathematically impossible” for the Abrams campaign to force a runoff. According to the latest tallies, Kemp is up by 59,000 votes. Kemp had 50.2 percent of the vote by early Monday.

Abrams, though, has maintained that she will not concede until every vote has been counted, and pointed to the 5,000 new votes tallied over the weekend that favored her. The Washington Post reported that she would need 21,700 additional votes to force a runoff.

“The bottom line is this race is not over,” Abrams’ campaign manager Lauren Groh-Wargo said in a statement. “It is still too close to call, and we do not have confidence in the secretary of state’s office.”

Kemp was Georgia’s secretary of state, but resigned from the post last week upon declaring his victory in the gubernatorial race.

And in Arizona, the race to replace Sen. Jeff Flake, R-Ariz., has yet to be settled, as Democratic candidate Rep. Kyrsten Sinema increased her advantage over Republican candidate Rep. Martha McSally by more than 32,000 votes as of Sunday.

"Kyrsten has now expanded her overall lead to 32,640 or 1.52 percent, meaning McSally would have to win the remainder of Maricopa ballots by 22 percent to take the lead in this race," Sinema spokesman Andrew Piatt said in a statement. "This is not plausible. Kyrsten will be declared the next U.S. Senator from Arizona."

But approximately 200,000 votes remain uncounted across the state, and Arizona election officials said they would not be finished tallying votes until Thursday. More than 2.3 million votes were cast in the historic election.

“The votes are still being tallied, but the latest count shows my liberal opponent has gained a slight edge. There are still more than 300,000 votes left to be counted and I can't slow down now -- Democrats certainly won't,” McSally’s campaign wrote in an email. "Right now, my opponent's army of attorneys are gearing up for a legal fight to defeat me and I've got to amplify my efforts to cement my victory."