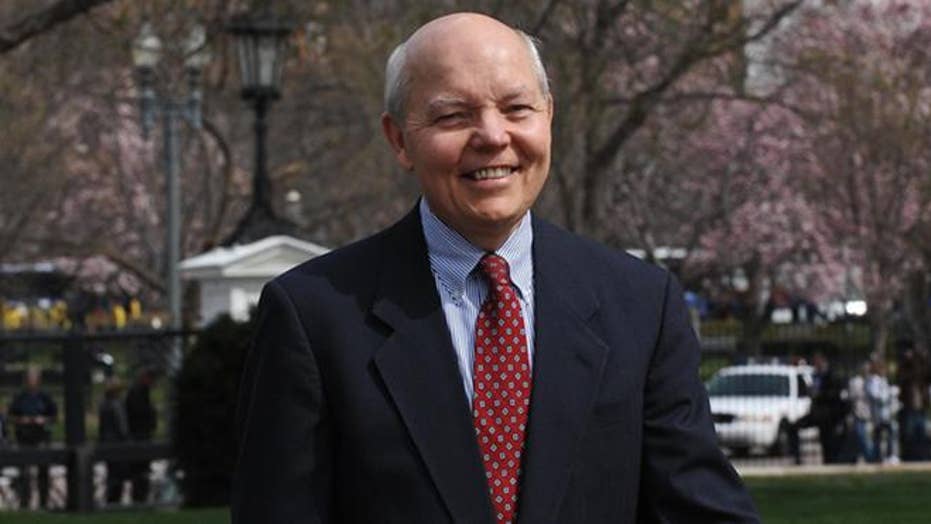 Nearly two months into the Trump administration, the IRS commissioner House Republicans once threatened with impeachment remains on the job.

John Koskinen's continued tenure may be surprising, considering how aggressively Republicans went after him under the Obama administration. But despite a sustained push by congressional Republicans to oust the IRS chief before his five-year term expires this November, President Trump so far has made no move to do so.

Just last week, Koskinen was seen in the Capitol and told Fox News he was there to meet with “old friends.” Asked if he intended to stay on as commissioner during the Trump administration, Koskinen simply said, “They haven’t talked to me.”

A White House official, asked about the commissioner's future, also told Fox News on Wednesday they had no personnel announcements “at this time.”

House Republicans aren't giving up their quest to show Koskinen the door.

“President Trump should fire Commissioner Koskinen and replace him with someone that will bring integrity and competence to the IRS,” House Judiciary Committee Chariman Bob Goodlatte, R-Va., told Fox News on Tuesday.

“The consideration of the impeachment of IRS Commissioner John Koskinen in the House in late 2016 was a clear indication that Congress and the American people have no confidence in Commissioner Koskinen or his ability to discharge his duties,” Walker wrote, nudging the president by citing statutory language giving him authority to strip Koskinen of his title. Doing so, he claimed, would “restore the credibility” of the federal tax authority.

“We have not received a response to our letter,” an aide at the Republican Study Committee told Fox News. “We understand, however, the administration remains busy putting its team in place, and we look forward to its response.”

A White House spokesperson told Fox News they received the January letter and "are currently reviewing it."

Rep. Ron DeSantis, R-Fla., reportedly also asked Vice President Mike Pence at the GOP retreat in Philadelphia if he would seek Koskinen’s resignation. According to the report, the vice president told the congressman he would look into the matter and follow up with him the next week.

Neither DeSantis’ nor the VP's office responded to Fox News’ request for comment on whether there was any follow-up.

But DeSantis issued a statement to Fox News saying: “The IRS will not be reformed under Koskinen’s leadership and I urge [Treasury] Secretary Mnuchin and President Trump to take action to replace Koskinen with someone willing to reform this troubled agency.”

An IRS spokesperson told Fox News, "The Commissioner remains focused on the important tax administration work being done at the IRS, including a successful start to the nation's tax season."

GOP angst toward Koskinen stems from claims he obstructed their investigation of the targeting of Tea Party and other conservative groups before he was commissioner. The matter culminated at the end of 2016, when the full House turned back an attempt to impeach him.

The controversy itself hasn't died off. Judicial Watch said Wednesday that the IRS reported to a U.S. District Court that it located an “additional 6,924 documents of potentially responsive records” relating to the FOIA lawsuit on the targeting scandal.

Goodlatte said it's “outrageous” that “years have gone by” and no one at the IRS has been held accountable for the targeting.

At the IRS, the commissioner serves a five-year term—this, after a statute was added in 1998 in a bid to maintain continuity for the American people throughout the tax season in the first year of a new presidency.

Koskinen's term is set to end Nov. 13, unless the president were to remove him.

Charles Rossotti, an IRS commissioner under then-President Bill Clinton and the first to serve the five-year term, defended the importance of the statute -- telling Fox News while the head of the IRS is a political appointee, he or she is only in charge of administering the tax code.

“If you’re going to run an agency as huge as the IRS, you need time and continuity to make improvements, so the distinction was made as an administrative leadership management position as opposed to a policy position,” Rossotti said, citing the “demanding” situation that surrounds the April tax deadline. “You really wouldn’t want to have no commissioner when the administration changes just two months before Americans file their returns.”

While Koskinen is a favorite target of congressional Republicans, he and Trump do have a history.

In 1975, when the future president reached an agreement to purchase New York's Commodore Hotel from the bankrupt Penn Central Transportation Company, Koskinen handled the sale of the properties in his capacity as vice president of consulting firm the Palmieri Company, according to a New York Times article.

The purchase was one of Trump's first major real estate deals.

Republicans and conservative groups alike say it would be “frustrating” to keep Koskinen through the end of his term.

But Rossotti defended both Trump and Koskinen.

“When I did the transition to Bush, if someone had come to me and said, 'look, we don’t want you here,' I wouldn’t have stayed,” Rossotti said. “But anybody sensible would look at this situation and decide there are a lot of people who need to file their tax returns next month.”