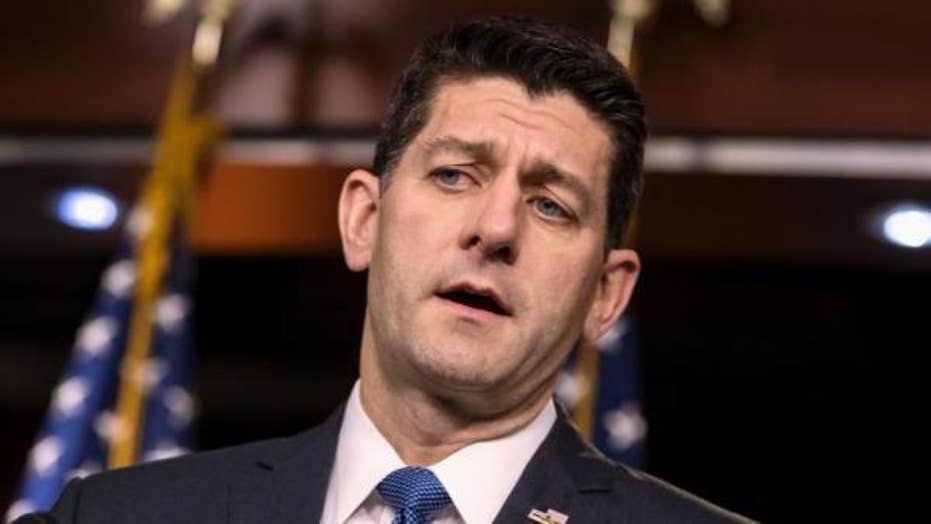 Paul Ryan advocated for the document's release as long as 'sources and methods' aren't revealed; reaction and analysis on 'The Five.'

“In the past 24 hours, right here in West Virginia, we’ve had some very productive discussions on what our 2018 agenda will be -- on everything from infrastructure to national security,” began House Speaker Paul Ryan, before fielding a flurry of reporter questions about the memo.

Ryan, like others at the retreat, at the Greenbrier resort, stood behind House Intelligence Committee Chairman Devin Nunes’ drive to release the document, which purportedly speaks to how a top-secret court was used to get a surveillance warrant in the Russia investigation and other issues.

“If Americans’ civil liberties were abused, then that needs to come to light so that doesn’t happen again,” Ryan said, amid speculation that the memo, which could be released in a matter of hours, will be damaging to the FBI and the Justice Department.

While Republicans appear to be rallying around fellow party member Nunes, who is under heavy attack from congressional Democrats, GOP Rep. Jeff Duncan is still expressing concerns about the possible repercussions of the memo’s release.

“Having read ‘The Memo,’ the FBI is right to have ‘grave concerns’ - as it will shake the organization down to its core - showing Americans just how the agency was weaponized by the Obama officials/DNC/HRC to target political adversaries,” the South Carolina lawmaker tweeted Thursday.

California Rep. Adam Schiff, the intelligence committee’s top Democrat, is alleging Nunes made “material changes” to the memo after the committee voted Monday to release it.

The GOP-controlled House Intelligence Committee’s vote to release the memo triggered a White House review process. President Trump has the right to object to the publication of the four-page memo. But sources say he is expected to sign off on declassifying it, with a release expected on Friday.

While Schiff raised concerns about the edits, Nunes and other Republicans downplayed the changes as minor.

Ryan also said Thursday that his understanding is Nunes made the changes before the vote and they were made to protect national security and under the aegis of the FBI.

The show of support for Nunes, whose staff purportedly wrote the memo, follows days of uncertainty among the GOP about whether to release the document and potentially jeopardize national security or damage the Justice Department.

In a rare rebuke, the FBI said Wednesday that it had “grave concerns about material omissions of fact that fundamentally impact the memo’s accuracy.”

The memo could end up fueling GOP criticism over the broader Russia investigation into whether Trump associates colluded with Russian during the 2016 presidential race.

Democrats argue that Republicans are using the memo to do exactly that -- undermine the special counsel probe.

Ryan, R-Wis., suggested Thursday that Democrats were “just playing politics” and “looking for a political distraction.”

Virginia GOP Rep. Bob Goodlatte, the House Judiciary Committee chairman, told reporters at the retreat that he didn’t think Nunes made substantial changes to the memo, which he has read, and also urged its release.

Republicans have indicated the classified memo focuses on whether the FBI use unsubstantiated information to obtain a warrant from the Foreign Intelligence Surveillance Court on then-Trump campaign adviser Carter Page.