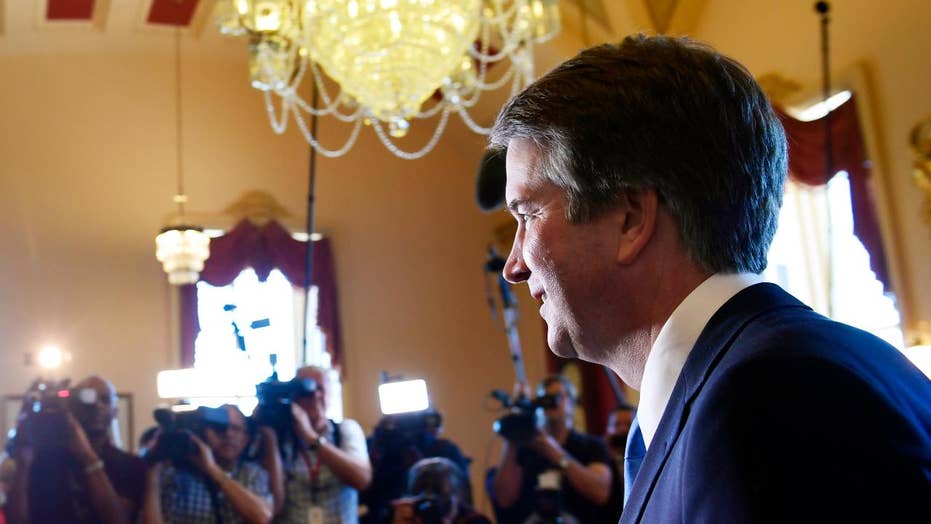 Senate Democrats outline a strategy to oppose the Supreme Court nominee while Majority Leader McConnell pushes for a quick confirmation.

The campaign is underway.

Not the race for the 2020 Democratic presidential nomination. No mentions of Sens. Kamala Harris, D-Calif., and Elizabeth Warren, D-Mass., or former Vice President Joe Biden.

It’s the campaign for the Supreme Court.

Democrats and Republicans will burn tens of millions of dollars in a campaign to confirm Supreme Court nominee Brett Kavanaugh or torpedo his nomination. Everyone will try to force the hands of swing votes like Sens. Lisa Murkowski, R-Alaska, Susan Collins, R-Maine, and Joe Donnelly, D-Ind.

The Kavanaugh nomination is about the midterm elections as much as it is about the balance of power on the Supreme Court.

Republicans have used judicial nominations to gin up their base for years. They’ll certainly attempt to excite Republican voters this fall with Kavanaugh. Many observers see the confirmation as Kavanaugh as a possible path to overturning Roe v. Wade or ruling against the labor movement.

Democrats can play at this game, too.

Why haven’t Democrats exploited the federal judiciary for political gain the way Republicans have?

“We are not as Machiavellian as they are,” said House Democratic Caucus Vice Chair Linda Sanchez, D-Calif.

But Sanchez says Kavanaugh’s nomination presents the party with an opening.

The Kavanaugh nomination may appear like bad news for Democrats. But if Democrats are crafty enough, they could swivel Kavanaugh’s confirmation into a midterm battle cry.

Article II, Section 2 of the Constitution requires the Senate to confirm Supreme Court nominees, via “Advice and Consent.” But the process leading up to that confirmation vote evolved over the years.

Senators never even met with nominees until 1925. Justice Harlan Fiske Stone was the first nominee to appear in person to field questions from the Senate Judiciary Committee ahead of his confirmation to the High Court. Senators raised concerns about Stone’s ties to Wall Street. The process of a “modern” confirmation hearing began with the nomination of Justice John Harlan Marshall II in 1955. The advent of television ushered in a different model for a Supreme Court confirmation hearing. It culminated in 1991 with dramatic, wall-to-wall, televised hearings for Supreme Court Justice Clarence Thomas. Anita Hill accused Thomas of sexual harassment when they worked together at the Equal Employment Opportunity Commission (EEOC).

“The confirmation process has turned into a political campaign for office,” said Ron Bonjean, former communications director for former Senate Majority Leader Trent Lott, R-Miss. “You have judges that have brilliant legal minds. But they are literally running for office for the first time. Having a sherpa or a campaign manager help them through the process is extremely useful.”

As a result, the nominee, or candidate, as the case may be, spends weeks touring the Senate for conclaves with nearly all 100 senators. Here’s where the “sherpa” comes in. Capitol Hill may only stand 88 feet above sea level. But trekking to the highest court in the land necessitates a political alpinist, lest the nominee plunge into a Senate crevasse.

“You can call it a guide. Or sensei. Or teacher. Or whatever. But the sherpa is usually the guide. It is somebody you are looking to as you go through a process,” said Bonjean. “When you have a sherpa, it is not for the rest of your life. It is usually because you are on a trip and you need help getting from point A to point B.”

Bonjean worked with former Sen. Kelly Ayotte, R-N.H., as she served as sherpa to Supreme Court Justice Neil Gorsuch during his confirmation process last year. Bonjean was also once a top aide to former Sen. Jon Kyl, R-Ariz. The Trump Administration tapped Kyl to escort Kavanaugh to his Senate appointments this year.

“I would want (Kyl) in my foxhole any day of the week as a legislative sherpa, walking around Brett Kavanaugh,” said Bonjean.

Some lament alterations to the contemporary confirmation process. Meeting the nominee used to be rare. Now it’s not. Hearings didn’t happen. Now they’re a marquee event. The same with TV. And as part of that evolution, the “campaign” for the Supreme Court is here to stay.

Is that a problem?

There’s been talk in Major League Baseball of late about “shifts.” That’s where the team in the field adjusts to the trends of the batter, repositioning defenders accordingly. For a left-handed pull hitter, the third baseman stands close to second base, the shortstop is where the second baseman usually plays and the second baseman patrols short right field. Baseball Commissioner Rob Manfred is considering proposals to police defensive shifts, regulating their use and restricting where players may stand.

The solution for hitters? Adjust. Choke up on the bat. Cue a flair into left field. Drop a bunt down the abandoned third base line. Granted, tweaking the way you hit is easier said than done. But there are always options.

If senators and the public don’t like how Supreme Court nominees now must run a “campaign,” consider ways to overcome the “shift” on Capitol Hill.

Lisa Murkowski is one of the most-watched senators in this campaign. A defection by Murkowski or fellow Republican Susan Collins could upend the nomination. The Senate functions with a narrow 50-49 GOP edge these days. Sen. John McCain, R-Ariz., remains out, suffering from brain cancer.

“It’s okay to take it slow,” said Murkowski who opposes an expedited track for Kavanaugh. In fact, the Alaska Republican observed that lawmakers on both sides made snap judgments about Kavanaugh, minutes after President Trump unveiled his nominee.

“There is such an immediate reaction, both pro and con,” said Murkowski. “They seem to be so absolute in their opinion. They believe that he should be absolutely confirmed or absolutely not confirmed.”

Every senator is seeking something different in the confirmation process, right down to the nominee’s judicial philosophy. 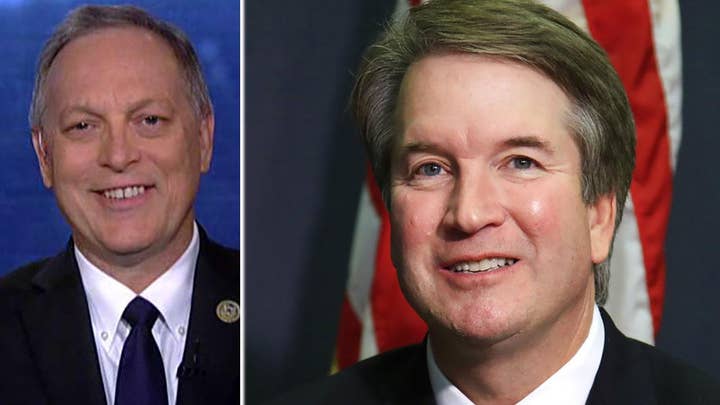 “I’m looking for a cross between Socrates and Dirty Harry,” opined Sen. John Kennedy, R-La., a member of the Senate Judiciary Committee.

In 2017, three Democratic senators voted to confirm Gorsuch: Sens. Heidi Heitkamp, D-N.D., Joe Manchin, D-W.Va., and Joe Donnelly. All three face challenging re-election bids in red states this November. But there’s another factor in the Kavanaugh campaign which didn’t exist last year. That’s the election of Sen. Doug Jones, D-Ala. No other Democratic senator represents a constituency as conservative as the one Jones has in Alabama.

“There’s a good chance we pick up a number of Democrats,” observed Sen. Richard Shelby, R-Ala., about the Kavanaugh nomination. “It would serve Jones well in the state of Alabama to support a conservative judge for the Supreme Court.”

When initially asked about his take on Kavanaugh, Jones replied “I haven’t done that deep a dive yet.”

Democrats hope to slow down Kavanaugh’s nomination to parse his voluminous record. That’s an important tactic. The more time to study, the better the chances Democrats find a tripwire for Kavanaugh.

On Thursday, the Trump Administration yanked the nomination of Ryan Bounds for the Ninth Circuit Court of Appeals, moments before his confirmation vote. The nominee lacked the votes after senators unearthed controversial writings from Bounds.

Democrats immediately seized on Bounds’ writings as an undergraduate at Stanford as a reason Senate Republicans should grant them ample time to review Kavanaugh’s record.

“This shows when you first ask for writings, maybe they don’t show you everything,” said Sen. Jeff Merkley, D-Ore., of Bounds. “The same rule should apply to Kavanaugh.”

But dragging it out could backfire on Democrats. Sure, Senate Majority Leader Mitch McConnell, R-Ky., prefers to confirm Kavanaugh when the Supreme Court’s new term starts October 1. But McConnell could call the Democrats’ bluff and schedule the confirmation vote as close to the midterm elections as possible. That would apply maximum pressure on Democrats from battleground states to vote yes.

After all, this nomination isn’t just about the Supreme Court. It’s a campaign for the midterms.