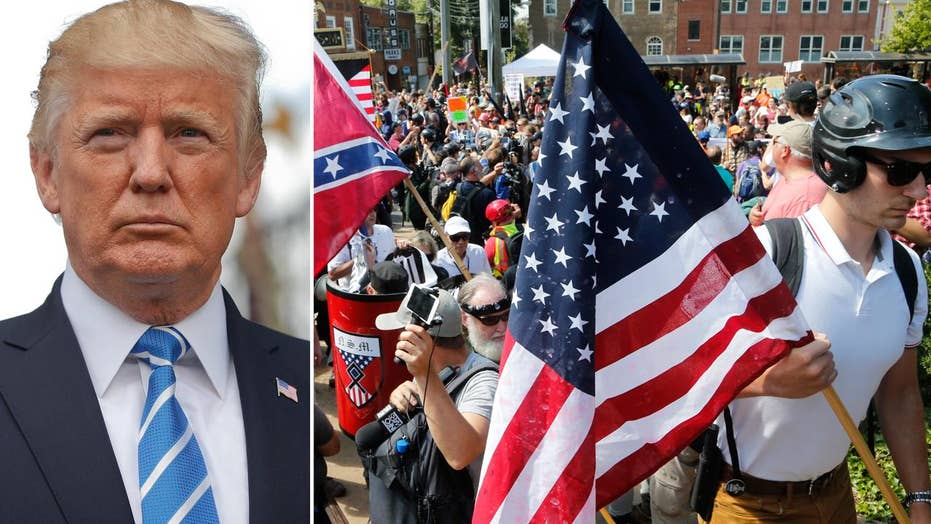 A growing number of Republican lawmakers are urging President Trump to specifically call out the white nationalists involved in the violent protests in Charlottesville, Va., on Saturday.

“Mr. President - we must call evil by its name,” Colorado Republican Sen. Cory Gardner tweeted. “These were white supremacists and this was domestic terrorism.”

Trump didn’t single out the white nationalists when he addressed the unrest on Saturday evening. He blamed “many sides” for the violence.

“We condemn in the strongest possible terms this egregious display of hatred, bigotry and violence on many sides – on many sides,” the president said.

Other Republicans in Congress took issue with Trump's remarks.

“Very important for the nation to hear @potus describe events in #Charlottesville for what they are, a terror attack by #whitesupremacists,” tweeted Florida Sen. Marco Rubio.

Another Florida Republican, Rep. Ileana Ros-Lehtinen, tweeted that
"White supremacists, Neo-Nazis and anti-Semites are the antithesis of our American values. There are no other ‘sides’ to hatred and bigotry.”

"We should call evil by its name," tweeted Utah Sen. Orrin Hatch. "My brother didn't give his life fighting Hitler for Nazi ideas to go unchallenged here at home."

"The Nazis, the KKK, and white supremacists are repulsive and evil, and all of us have a moral obligation to speak out against the lies, bigotry, anti-Semitism, and hatred that they propagate.

"Having watched the horrifying video of the car deliberately crashing into a crowd of protesters, I urge the Department of Justice to immediately investigate and prosecute this grotesque act of domestic terrorism."

Later Saturday, U.S. Attorney General Jeff Sessions announced that a federal civil rights investigation would be launched into the fatal car incident in Charlottesville that authorities said left one woman dead and 19 other people injured.

"This violence and hate must stop," Kasich wrote in one message.

Speaking at his New Jersey golf club, Trump condemned the “egregious display of hatred, bigotry and violence” in Charlottesville, Virginia, where white nationalists upset over the removal of a Robert E. Lee statue violently clashed with counter-protesters.

On Saturday evening, a White House aide issued a statement clarifying why the president used the phrase "on many sides.”

“The president was condemning hatred, bigotry and violence from all sources and all sides,” a White House official said. “There was violence between protesters and counter protesters today.”