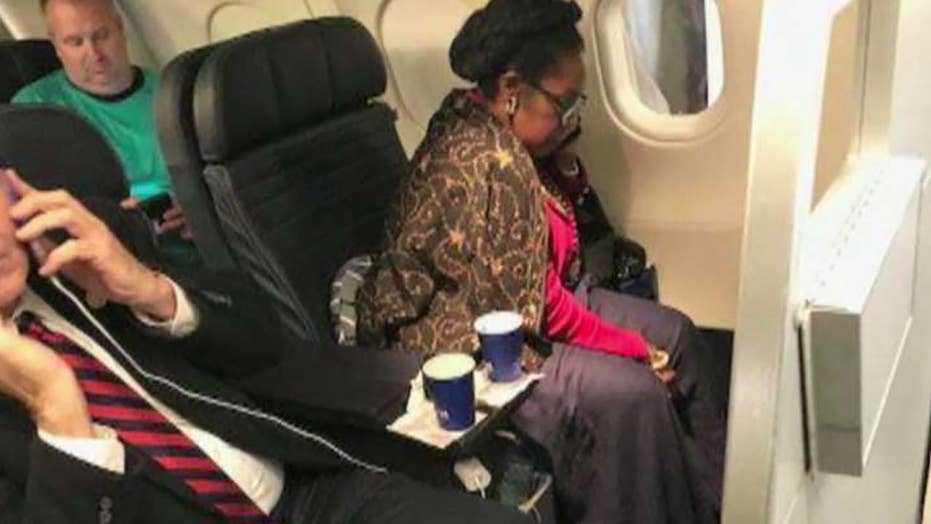 Fellow passenger claims she was bumped from her first class seat in favor of the Democrat from Texas; did race play a role? Reaction and analysis from conservative radio host Larry O'Connor and Democratic strategist Michael Starr Hopkins.

Years before she was accused of receiving preferential treatment and costing a passenger her seat on a United Airlines flight, Rep. Sheila Jackson Lee was named the "meanest" member of Congress.

Jackson Lee, D-Tex., appeared on Washingtonian magazine’s “best and worst of Congress” list in 2014. The biennial survey polls congressional staffers on what they really think of their Capitol Hill bosses.

At the time, the Texas congresswoman “won” the titles of “meanest” and “show horse,” with her employees citing heavy workloads and harsh criticism.

I am a queen, and I demand to be treated like a queen.

A LOOK AT RECENT AIRLINE CONTROVERSIES

A former executive assistant told the Chronicle that Lee insisted being treated like royalty.

“You don’t understand. I am a queen, and I demand to be treated like a queen,” Lee allegedly once told an event organizer.

Other ex-staffers said Lee called them "stupid" or "idiots." Some claimed they were forced to do her laundry, go on late-night food runs and hold her handbag for her.

Lee made headlines again last week after United Airlines was accused of giving a woman’s first-class seat to the Democratic representative.

The passenger, Jean-Marie Simon, said in a Facebook post on Dec. 20 the airline “deliberately” erased her ticket in order to “accommodate a member of Congress.”

Lee later alluded that racism may have played a role in the accusations.

“Since this was not any fault of mine, the way the individual continued to act appeared to be, upon reflection, because I was an African American woman, seemingly an easy target along with the African American flight attendant who was very, very nice,” Lee wrote on Facebook Dec. 22.

But the seating dustup was not the first incident Lee has had on a plane.

According to the Chronicle, the congresswoman once lashed out on a flight because it did not serve the seafood special she wanted.

“Don’t you know who I am? I’m Congresswoman Sheila Jackson Lee. Where is my seafood meal? I know it was ordered,” she allegedly said.