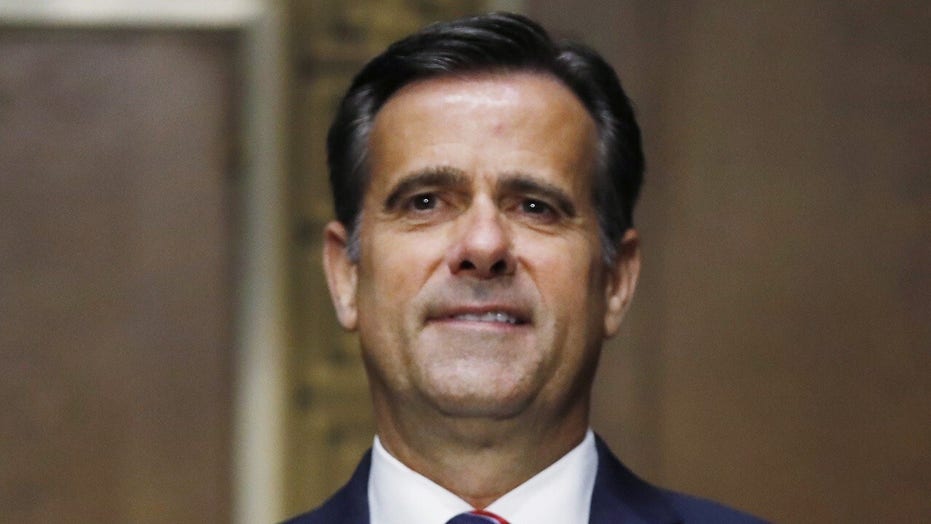 Rep. John Ratcliffe, President Trump's choice to be the director of national intelligence, pledged to senators Tuesday he'd deliver information without bias and would look forward to leaving politics behind if confirmed for the top job.

The Texas congressman, one of Trump's fiercest allies during impeachment, said he didn't want to "re-litigate" the politically-charged impeachment and argued he has the experience to be an independent leader of the nation's 17 intel agencies, given his past work as a former federal prosecutor.

"The best job I ever had was to be the United States attorney and what I loved ... was it was an apolitical position," Ratcliffe told the Senate Intelligence Committee during his nomination hearing. "I stood up always to represent the United States of America. Never one party or another. And I very much view that as this role for the DNI. I look forward to treating every member, Republican and Democrat,  exactly the same way. And, frankly, being out of politics."

WHO IS JOHN RATCLIFFE, TRUMP'S NOMINEE FOR DIRECTOR OF NATIONAL INTELLIGENCE?

Ratcliffe, who had a rocky road to Tuesday's confirmation hearing when he withdrew his nomination in August, said he'd deliver "unvarnished," truthful information to Trump, regardless of whether it may anger him.

"As the president's principal intelligence advisor, I would ensure that all intelligence is collected analyzed and reported without bias, prejudice or political influence," Ratcliffe said.

Trump has been deeply skeptical of the intelligence community and has taken aim at intel figures and whistleblowers in the wake of the Russia probe and Ukraine impeachment investigation. Trump said intel agencies have "run amok" and told reporters in July he nominated Ratcliffe because he's "strong and can really rein it in."

Under tough questioning from Democrats on whether he'd stand up for whistleblowers and for the intelligence community, Ratcliffe offered assurances.

"I don't think that the men and women of the intelligence community are running amok," Ratcliffe said, refuting Trump's assessment.

Ratcliffe also defended whistleblowers, even after Trump canned the intelligence community inspector general Michael Atkinson after he brought the Ukraine whistleblower complaint to Congress, which ignited the impeachment probe.

"I want to make it very clear, if confirmed as DNI, every whistleblower -- past, present and future -- will enjoy every protection under the law," Ratcliffe said under pointed questioning from Sen. Dianne Feinstein, D-Calif. "I don't want to re-litigate old issues of what happened during the impeachment inquiry, my issue was not with the whistleblower, my issue was with what I perceived as a lack of due process in the House process there."

The congressman said his loyalty is to the Constitution and Trump's animosity to the intelligence community won't color how he delivers information to him.

"You have my commitment to deliver timely, accurate and objective intelligence, and to speak truth to power," Ratcliffe said.

Ratcliffe is a member of the House Intelligence, Judiciary, and Ethics Committees. Prior to joining Congress, Ratcliffe served as Chief of Anti-Terrorism and National Security for the Eastern District of Texas and Mayor of Heath, Texas.

Several Democrats expressed doubt about Ratcliffe, who initially withdrew from consideration in August over concerns he overstated part of his biography and record. Democrats were leery of Ratcliffe's political ties to Trump and whether he could stand up to the president's purge of the intel officials.

"I have to say that, while I am willing to give you the benefit of the doubt in this hearing, I don’t see what has changed since last summer when the president decided not to proceed with your nomination over concerns about your inexperience, partisanship, and past statements that seemed to embellish your record," Sen. Mark Warner, D-Va., said.

"This includes some particularly damaging remarks about whistleblowers, which has long been a bipartisan cause on this Committee," Warner said. "I’ll speak plainly: I have the same doubts now as I did back in August."

Ratcliffe's hearing looked very different than those jam-packed nominating hearings in the past. Attendance was sparse. Senators and staff had masks and were seated very far apart.

Senators weren’t all present at once but came into the room on a rotating basis for questioning. And extreme social distancing meant not all of Ratcliffe’s family or supporters could be in the room. Former Attorney General John Ashcroft wasn’t present to introduce Ratcliffe, so Sen. John Cornyn, R-Texas, took on the job and said the GOP congressman understands the difference between his current job and the one he's hoping to have.

"John Ratcliffe has the personal integrity and intelligence to be able to understand the difference between being a legislator and being the director of national intelligence," Cornyn said.

“This hearing will be a little bit different,” Burr said. “It is perhaps the first congressional hearing held during the extenuating circumstances of the pandemic.”

Burr was wearing an uncharacteristic beard, which he said was in honor of the former Oklahoma GOP Sen. Tom Coburn, who died of cancer in March.

In a sign of the seriousness of the health crisis, Ratcliffe sat at a table with hand sanitizer and disinfecting wipes along with the traditional bottles of water.

“The COVID-19 pandemic has cut short the lives of over 67,000 Americans," Ratcliffe said first in his opening remarks. "It has sickened over 1 million Americans, and it has impacted every one of us. My deepest sympathies are with those we've lost and I salute the efforts of those on the frontlines, including the dedicated intelligence community professionals reporting for duty and carrying out their mission.”

Trump nominated Ratcliffe in late February to serve as director of national intelligence, a post that’s been vacant since last summer when then-DNI Dan Coats resigned. If confirmed he'd oversee and coordinate the nation's 17 intelligence agencies.

Richard Grenell, the U.S. ambassador to Germany, has been serving as acting DNI.

Ratcliffe, a staunch defender of Trump and vocal critic of former Special Counsel Robert Mueller’s Russia investigation, originally was on the shortlist for DNI after Coats’ exit, but he withdrew his name following harsh criticism from Democrats over the former federal prosecutor’s lack of experience.

Ratcliffe's nomination now must pass out of the Senate Intelligence Committee before heading to the full Senate for a vote.