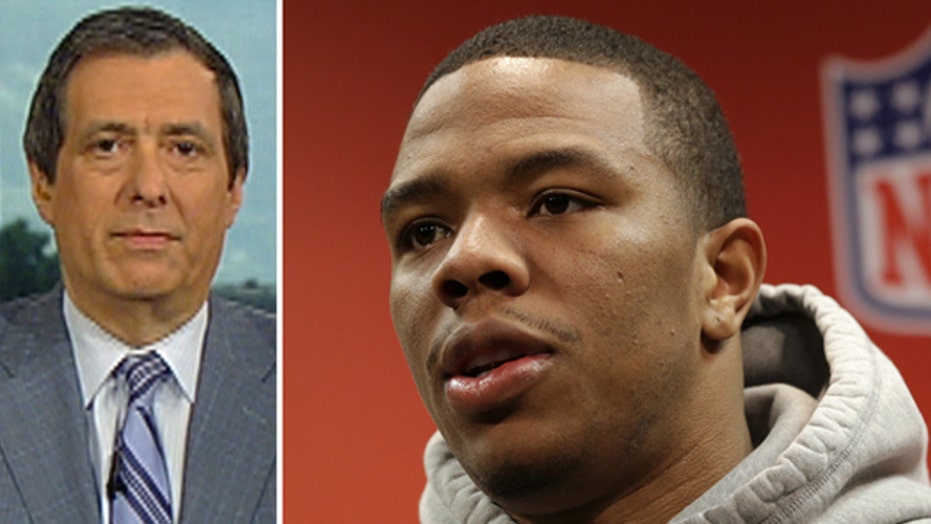 Kurtz on NFL scandals: No video, no problem

Ray Rice, sad to say, is not alone.

The ex-Ravens star who is now, quite deservedly, the poster boy for a battering spouse is one of a long line of professional athletes who have engaged in violence and gotten away with a wrist slap or no punishment at all.

Why is the national press only now focusing on these other cases as they search for sidebar stories during the furor over Rice punching Janay in an elevator?

Rice, too, would have been coddled with that measly two-game suspension had TMZ not obtained the awful video (see my “MediaBuzz” interview with TMZ founder Harvey Levin here).

But there’s a rogues’ gallery out there in the sports world. Take Greg Hardy of the Carolina Panthers, who was all set to play yesterday until the NFL team deactivated him at the last moment.

A North Carolina judge found Hardy guilty of assaulting his former girlfriend in May. He is alleged to have pulled her hair, slammed a toilet seat on her arm and put his hands around her neck.  Hardy is appealing, but neither the league nor the Panthers have seen fit to make him sit out a single game.

Here, as noted by Time, is the complaint by Hardy’s accuser.

“I have bruises from head to toe, including my head, neck, back, shoulders arms, legs, elbow and feet. Hardy pulled me from the tub by my hair, screaming at me that he was going to kill me, break my arms and other threats that I completely believe. He drug me across the bathroom and out into the bedroom. Hardy choked me with both hands around my throat while I was lying on the floor. Hardy picked me up over his head and threw me onto a couch covered in assault rifles and/or shotguns. I landed on those weapons. Hardy bragged that all of those assault rifles were loaded. Landing on those weapons bruised [my] neck and back.”

And here’s what the woman said in court: “He looked me in my eyes and he told me he was going to kill me. I was so scared I wanted to die. When he loosened his grip slightly, I said just,`Do it. Kill me.’”

And the team was okay with this guy representing the state of North Carolina on the playing field?

Of course, there’s no video of Greg Hardy doing what he is alleged to have done. So he skates. No suspension.

Maybe you’ve seen the footage of Panthers owner Jerry Richardson, choking back tears as he disputes that the team has been “too slow” to deal with the problem and declares: “I stand firmly against domestic violence, plain and simple.” Except he doesn’t. It’s just words. He hasn’t done a thing.

“Brett Myers, a pitcher for the Philadelphia Phillies, was charged with assaulting his wife on a Boston street in 2006 after witnesses said he struck her in the face and pulled her hair. The Phillies put him on the mound as their starting pitcher about 36 hours later.

“Last October, the goaltender Semyon Varlamov of the National Hockey League’s Colorado Avalanche was arrested after his girlfriend told the police he had kicked her to the floor and stomped on her chest. After spending the night in jail, Varlamov was back in goal the next game.

“In late August, defensive lineman Ray McDonald of the National Football League’s San Francisco 49ers was arrested after an altercation with his pregnant fiancée, who the police said had visible injuries. He started in the 49ers’ season-opening victory Sunday.”

This, ladies and gentlemen, is par for the course.

Perhaps the media reflect the sports world, which in turn reflects society, when it comes to men beating up women. That is, we focus on a couple of high-profile cases and minimize or ignore the rest. No video, no problem.

If Chris Brown beats up Rihanna, everyone chatters about it for awhile and then moves on. His career is hardly derailed. ( I have to praise CBS Sports President Sean McManus for yanking Rihanna as the entertainment in Thursday night’s NFL game, and substituting a panel discussion about the Rice case and domestic violence.)

In the end, maybe professional sports are different, hewing to Vince Lombardi’s famous line about “winning isn’t everything, it’s the only thing.” Ray Rice was worth $10 million a year to the Baltimore Ravens because of his football skills. If he punched his girlfriend’s lights out, well, everyone makes mistakes. She forgave him, didn’t she? Let’s get him back on the field as soon as possible and move on.

Only this time we all got to see the punch and the way she collapsed to the ground. And we’re not moving on.