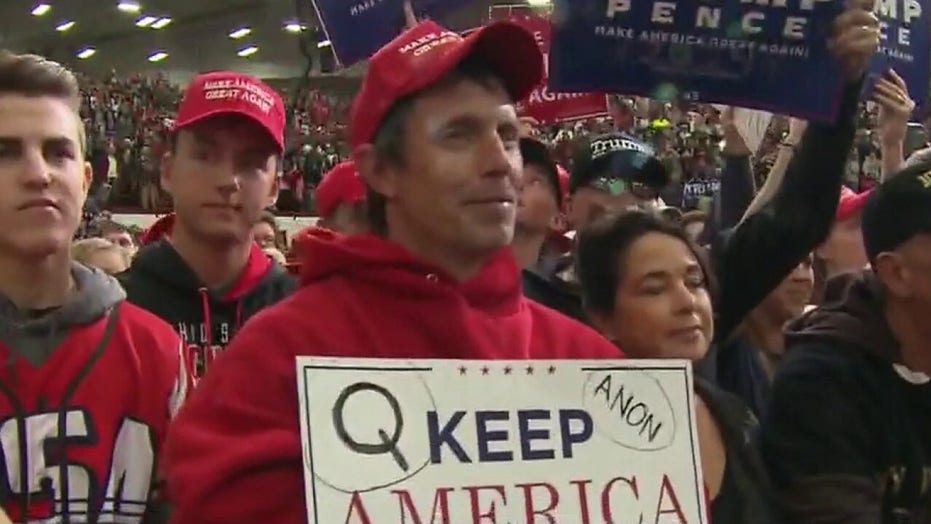 Trump is coming under considerable criticism for his comments about a movement called QAnon; Gillian Turner reports.

The QAnon movement, and the conspiracy theory motivating it, has been gaining considerably more media attention in the last year and in recent weeks -- specifically in the wake of the deadly Jan. 6 riot at the Capitol building.

Here’s what you need to know about the fringe movement.

Where did it start?

QAnon started on the 4chan message board -- an anarchic image board that features discussions, images, memes and theories on everything from politics to anime.

There, a person claiming to be a highly placed government official -- who went by the name Q Clearance Patriot -- began posting in 2017. He soon gained followers with his claims -- called "Q Drops" -- about how child traffickers and Satan worshippers were seeking to undermine President Trump with the help of global elites in the U.S. and abroad.

The drops are cryptic and laced with symbolism and hints. In turn, "bakers" interpret those drops, posting explanations online and in YouTube videos about how they apply to the real world.

QAnon followers see Trump as a figure fighting back against those forces, ordained by God to fight back against the global cabal culminating in a process called "The Storm."

Followers generally view politics through that lens, seeing the coronavirus as a bioweapon being wielded by this shadowy cabal that can be spread via 5G networks. Many looked for hints in Trump tweets and speeches, believing he is communicating or confirming the Q drops.

However, many in the movement have been reportedly dismayed by Trump's election defeat and concession -- which goes against that narrative -- although others have come up with ways to work around this.

"We gave it our all. Now we need to keep our chins up and go back to our lives as best we are able," one major Q administrator said after President Biden was inaugurated.

The identity of Q remains a mystery, although many have speculated as to his/her/their identity. Some believe it is more than one person, while others believe it started as a joke that got out of control. An NBC News investigation found that the Q theory could be traced back to three users who sparked discussion about the baseless conspiracy theory -- although it didn't identify who Q was.

While it began online through 4chan, and spread through online forums like Facebook, Twitter and YouTube, QAnon theories have been dripping into real life and becoming part of a domestic terror threat that has caught the attention of DHS and other security agencies.

While the number of QAnon supporters is hard to judge, it appears the fringe group has seen a surge in popularity in 2020. A December NPR poll found that 17% of Americans agreed with the statement, "A group of Satan-worshipping elites who run a child sex ring are trying to control our politics and media."

A Pew Research poll in September found that Americans who had heard of QAnon's conspiracy theory had jumped to 47% from just 23% in March. 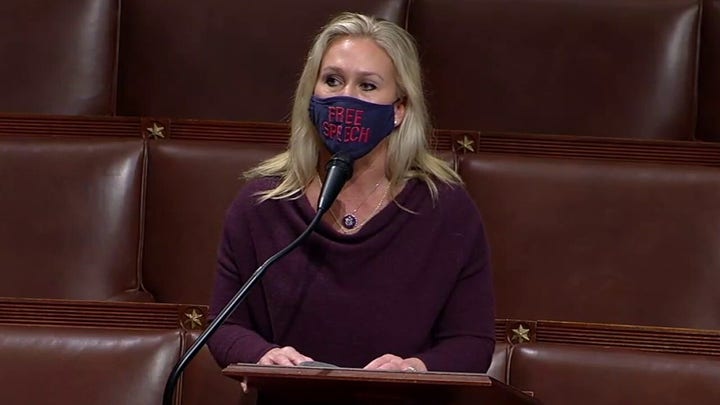 Separately, the movement has tapped into other conspiracy theories about the assassination of President John F. Kennedy and who was responsible for 9/11.

Trump sparked controversy in August when he said of QAnon that he didn’t know much about the movement, but "I understand they like me very much, which I appreciate" and said he believed it was gaining in popularity.

REP. MARJORIE TAYLOR GREENE DEFENDS HERSELF IN FLOOR SPEECH: 'NONE OF US ARE PERFECT'

QAnon had received media coverage throughout 2020 but that ramped up considerably after the Jan. 6 riot on Capitol Hill, which left five people dead -- including a police officer. The mob consisted of Trump supporters as well as QAnon supporters wielding signs and Q slogans.

While it wasn’t clear how many of those rioting believed in the narrative, many backers of QAnon were vocal in their support of the push on the Capitol during the certification of the Electoral College.

One man, who described himself as "QAnon Shaman" and sported face paint and a furry hat with horns, became a global image of the protests themselves.

The Department of Homeland Security has since issued a bulletin warning of "ideologically-motivated violent extremists with objections to the exercise of governmental authority and the presidential transition, as well as other perceived grievances fueled by false narratives, [who] could continue to mobilize to incite or commit violence."

It has also brought scrutiny on one new Republican freshman, Marjorie Taylor Greene, who has been accused of being part of the Q movement and made past statements about its conspiracy theories

Greene, a freshman rep from northwest Georgia, sought to introduce herself to the House last week as a "very regular American" who didn't trust the government and media and went down a wrong path with QAnon conspiracies that she now regrets.

"I was allowed to believe things that weren't true and I would ask questions ... and talk about them. And that is absolutely what I regret. If it weren't for the Facebook posts and comments that I liked in 2018, I wouldn't be standing here today," Greene said.

Greene was under fire for statements endorsing violence against top Democrats and touting theories about mass shootings being staged and doubt as to whether a plane crashed into the Pentagon on 9/11.

Greene said she's since "walked away" from QAnon and when she ran for Congress in 2020 she never campaigned on any of the conspiracies that she posted about in 2018. However, in an interview on ABC News 9 in July last year, Greene did not denounce QAnon and said she has "only ever seen patriotic sentiment coming out of" it.

The House voted to remove her from committee assignments.

Other Republicans at the state and local level have flirted with the movement. However, a number of top Republicans have urged the party to unequivocally reject the conspiracies.

"Until last week, many party leaders and consultants thought they could preach the Constitution while winking at QAnon," Sen. Ben Sasse, R-Neb., wrote in The Atlantic. "They can't. The GOP must reject conspiracy theories or be consumed by them."