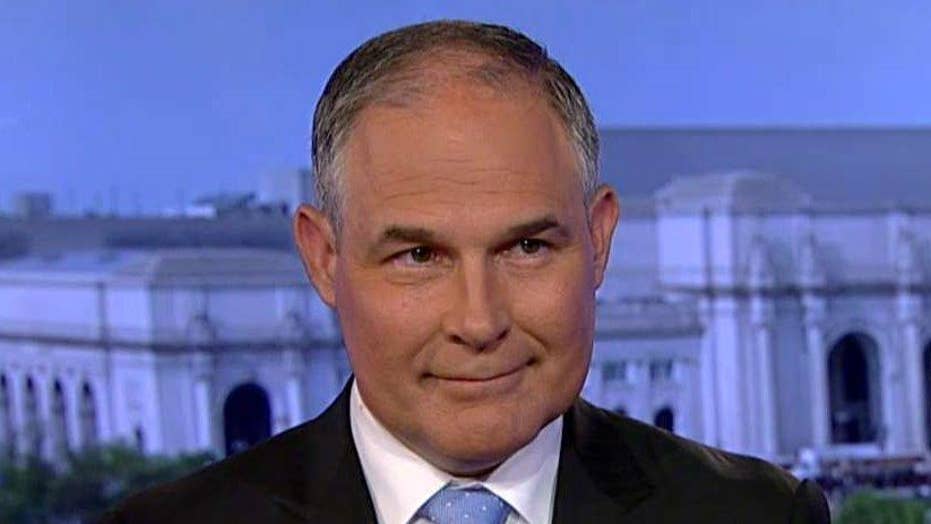 Pruitt on withdrawing from the Paris climate deal

The EPA administrator speaks out on 'Special Report'

EPA Administrator Scott Pruitt repeatedly refused on Friday to answer direct yes-or-no questions as to whether President Trump still believes that climate change is a hoax or if he has accepted it as real.

Pruitt spoke at a White House briefing one day after Trump announced that the United States would withdraw from the Paris Climate Accord. The president’s decision to abandon the nearly 200-nation strong pact drew sharp condemnation from global leaders as well as major corporations within the United States and around the world.

Pruitt stood next to Trump on Thursday and applauded the announcement to pull out of the pact.

The Paris Climate Agreement is a pact among nearly 200 nations to voluntarily reduce their greenhouse gas emissions in an effort to fight climate change. The U.S., the world’s second largest emitter of carbon, would have been required to reduce fossil fuel emissions nearly 30 percent by 2025.

Critics of the Paris accord argue that it hurts the economy but supporters say it will create jobs down the line. Trump argued that if the U.S. stayed in the climate agreement, it would put the country “at a permanent disadvantage.”

On Friday, Pruitt said Trump had made a “courageous” and “informed”decision and said he admired the president’s “fortitude and leadership in this matter.”

Asked essentially the same question by multiple reporters on Trump’s current climate views, Pruitt pivoted and said, “All the discussions we had through the last several weeks had been focused on one singular issue: Is Paris good or not for this country?”

When asked about his personal views on climate change, Pruitt said he agrees global warming is occurring and that “human activity contributes to it in some manner.”

But, he added, “Measuring with precision, from my perspective, the degree of human contribution is very challenging, but it still begs the question, what do we do about it? Does it pose an existential threat as some say?”

Pruitt also pushed back on critics calling him a “climate denier.”

“I don’t even know what it means to deny the climate. I would say that there are climate exaggerators,” he said.

Pruitt tried to prove his point by quoting an April 29 column in The New York Times where author Bret Stephens questioned scientific studies that seemed to show humans contributed to climate change.

During Friday’s press conference, the Sierra Club tweeted it fully supports the Paris agreement and added, “Scott Pruitt is a liar.”

Trump’s personal views on climate change could affect him politically.

If Trump rejects climate change, as he has done in the past, it would further alienate him from a majority of Americans who do believe in it. If he accepts the idea of climate change, it might create a division among him and his base supporters. It could also trigger calls for him to spend billions of dollars on finding a fix.

Following Pruitt at the podium was White House Press Secretary Sean Spicer, who also seemed to sidestep the question of the president’s views on climate change.

Reporters had asked Spicer earlier in the week about Trump's views on climate change. At the tme, he could not provide an answer. When asked again on Friday, Spicer said, " I have not had an opportunity to have that discussion (with the president)."