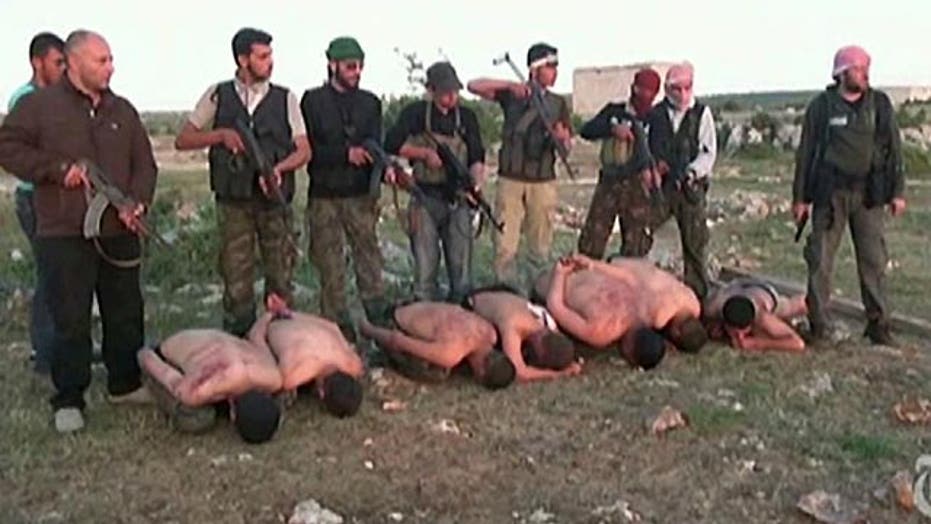 Just how 'moderate' are opposition forces in Syria?

Lawmakers who were early champions of a U.S. strike on Assad regime targets in Syria have stayed mum as video clips emerge appearing to show opposition soldiers both killing unarmed men and indicating they have possession of chemical weapons.

The latest, a video on InfoWars.com, purported to show a rebel militant in Syria claiming to have chemical weapons, and saying he's willing to target women and children. The video, which FoxNews.com has not been able to independently authenticate, only adds to the confusion over which side has the moral high ground and the reasons for U.S. military action in Syria.

President Obama and Secretary of State John Kerry made the case for American involvement based on evidence they claim shows Syrian President Bashar al-Assad's regime using chemical weapons against hundreds of children, and others. Videos were released to the media and seemed to show children disoriented, crying and writhing around in pain on makeshift cots.

Few outside the Assad regime and its closest allies have challenged American claims that the Syrian government was most likely behind the attack. But the powerful images which shaped the early case for a military mission are being countered with videos showing deadly and questionable acts on the other side.

On Thursday, Fox News reported on another video posted on a pro-Syrian regime website showing rebel commanders talking about their own “red line” after the government launched a chemical attack against civilians in August.

Obama had used the phrase “red line” last year to describe any use of chemical weapons in Syria.

The video was analyzed by Fox News Middle East specialist Walid Phares, as well as a separate Pentagon expert. According to both sources, one of the men in the video is identified as a deputy to General Salim Idris, leader of the Free Syrian Army, the same group some members of Congress hailed as a moderate in their push for U.S. action.

Yigal Carmon, the president of the Middle East Media Research Institute, who also reviewed the tape, said, "The message is if the West doesn't act, we (the rebels) too will have no red lines, and will use chemical weapons."

If authentic, the videos could cause problems for the administration as it argues the Assad regime -- and the Assad regime alone -- must be punished for violating "international norms" with the use of chemical weapons.

The footage shows Syrian rebels holding firearms and standing over seven shirtless, kneeling male prisoners with their hands tied behind their backs and their heads pressed to the ground. The video goes to black as the men are executed one by one.

Idris, speaking to Fox News via Skype from an undisclosed location on Friday, said the footage was a year old and didn’t reflect the majority of rebels.

Still, Obama seemed resolved in his decision to push forward with a strike.

"There are times where we have to make hard choices if we're going to stand up for the things we care about," Obama said at a press conference in St. Petersburg, Russia, during the G-20 global economic summit Friday. "I was under no illusions when I embarked on this path, but I think it's the right thing to do."