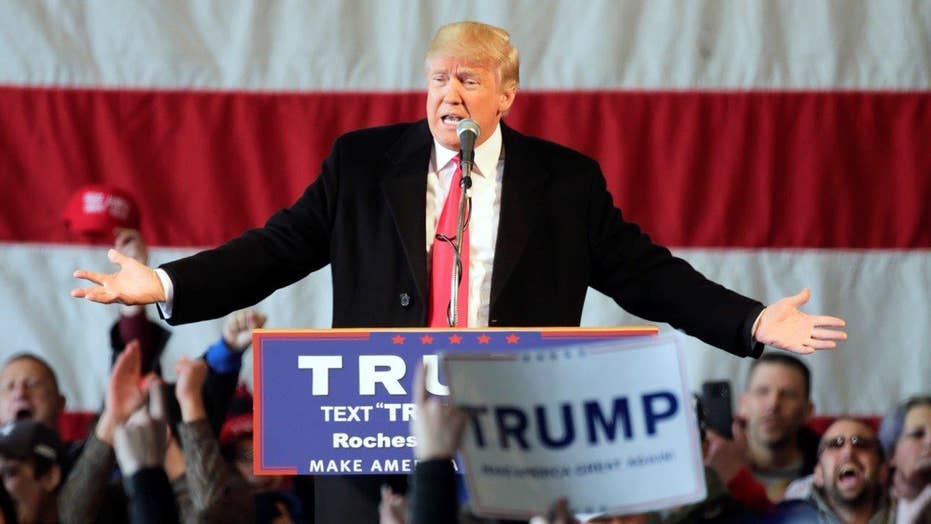 Strategy Room: Jessica Tarlov and Brian Morgenstern discuss Trump's war on the nominating process amid chatter about other 'options' like Paul Ryan and Gen. James Mattis

The pressure is mounting on Donald Trump to score decisive, delegate-sweeping wins in the remaining 16 GOP presidential primaries to avoid a contested convention, as party rivals Ted Cruz and John Kasich redouble efforts to pick off delegates where they can and hold Trump under the magic 1,237 number.

Trump’s next test is April 19 in New York. To take all 95 delegates, he must win with more than 50 percent statewide and at least that much in all of New York’s 27 congressional districts, each of which has three delegates up for grabs.

The New York businessman has a commanding lead in the state, according to most polls. But a Trump victory in any of the districts with less than 50 percent gives the runner-up one of the three delegates -- which is precisely what Cruz and Kasich are targeting.

“This race is far from over, and the overall goal of all the campaigns is still to lock up delegates,” Republican strategist Rob Burgess said Monday. “The strategy of focusing resources in markets outside of New York City is what could very well keep Kasich and Cruz in contention. This strategy would throw a wrench into the Trump campaign’s hopes of leaving New York with a majority of votes in all 27 congressional districts.”

Cruz is looking upstate, while Kasich has targeted western and upstate communities including suburban Rochester and state capital Albany.

The Ohio governor, in fact, is running second behind Trump in New York, according to a Fox News poll released Sunday, despite being dead last in the overall delegate count.

Kasich on Saturday delivered a message of better jobs and lower taxes to an overflow crowd of about 3,500 people at a town hall event outside of Rochester.

“We’re here for the working people,” Kasich said about his style of Republican politics. “We’re here to give everybody a chance.”

Kasich on Monday was in Troy, then Saratoga Springs, north of Albany.

Cruz, after making a rocky swing through the Bronx where he was met by noisy protesters, visited Albany on Thursday. He told the audience at a Christian school that he is part of a new generation of Republican leaders that will “stand and fight for liberty” and that he, not Trump, is the best GOP candidate to beat Democratic front-runner Hillary Clinton.

However, the Texas senator’s chances of actually notching a win in New York -- as he did last week in Wisconsin -- appeared unlikely as far back as January when he accused Trump of having “New York values” It's a phrase he associated with social liberalism, but has come back to haunt his campaign ahead of the primary.

The primary front-runner's campaign is still insisting they can win the necessary 1,237 delegates to clinch the nomination and avoid a contested convention -- yet to do so, Trump would need to win roughly 60 percent of the remaining delegates, a high bar.

Trump and newly hired convention manager Paul Manafort this weekend bashed Cruz for recent efforts to go to state and county conventions like the one last weekend in Colorado to secure support from GOP delegates.

Trump later told a crowd in Rochester on Sunday that the delegate-awarding system was “crooked,” hours after Manafort on NBC News compared Cruz’s efforts to “gestapo tactics.”

He also suggested that the Trump campaign was now beating Cruz at his own game but that the delegate-wrangling effort was “frankly … the side game.” And he expressed confidence about getting 1,237 delegates through the final, June 7 primaries.

“The games that have happened … are not important to the long-term game of how do we get to 1,237,” Manafort said. “We've got to go through to June. We got to wait until the process is done but I'm confident.”

The Cruz campaign said in response to Manafort's comments: "It's no surprise that Trump's team will lash out with falsehoods when facing a loss to distract from their failure. … We have earned our success by working hard to build a superior organization and are working within the process and rules."

Anticipating a fight for every delegate, Cruz was campaigning Monday in California, which holds a delegate-rich primary on June 7.

David Payne, a Republican strategist and Vox Global partner, suggested on Monday that Cruz’s efforts to win delegate support will be indispensable if Trump fails to get to 1,237 delegates -- as the candidates would have to compete for them during balloting at an open convention in July.

"Cruz will be on familiar turf,” Payne said. “Consider that Cruz is likely to win a handful of the remaining winner-take-all states …  coupled with proportional delegate wins for him and Kasich, this makes it mathematically difficult for Trump to win the nomination according to the current convention rules.”