Politicians on both sides of the aisle spoke out Thursday, after the Federal Communications Commission (FCC) voted to get rid of Obama-era "net neutrality" rules.

The move was slammed by many Democrats, including Sen. Ed Markey, D-Mass, who said he was intending to introduce legislation "that would restore the Open Internet Order."

Read on for a look at politicians' reactions to the Thursday vote.

"The @FCC just voted to end #NetNeutrality in a move that allows internet service providers to turn the internet into an uneven playing field, with fast lanes for some and slow lanes for others," Sen. Tammy Baldwin, D-Wisc., tweeted, calling it "not right."

"Today’s rollback of #NetNeutrality is a brazen betrayal of American consumers, innovators, students, and entrepreneurs – all of whom will suffer tremendously without a free and open internet," Sen. Richard Blumenthal, D-Conn., tweeted.

"This is an outrageous assault on a fair and open internet," Sen. Cory Booker, D-N.J., tweeted. "Mark my words, this decision will not last! We will reverse it by winning future elections."

Sen. Catherine Cortez Masto, D-Nev., tweeted that the vote "has now granted permission to ISPs to play favorites w/ customers who can afford to pay more, while leaving others behind. No one should be denied access to quality broadband. I'll fight to ensure the internet remains free and accessible to all."

"I commend @AjitPaiFCC & the FCC for repealing these oppressive Obama-era regulations and restoring freedom to the internet," Sen. Ted Cruz, R-Texas, tweeted. "The message for gov regulators & Congress should be simple- the internet should be free of taxation, censorship, & regulation."

"Thank you to everyone who contacted my office," she said. "Don't be discouraged because this fight is not over. I will be pushing in Congress to overturn this decision that will hurt consumers."

"#NetNeutrality is the latest decision by the Trump administration in an effort to systematically repeal and destroy EVERYTHING we achieved over the last eight years," Sen. Dianne Feinstein, D-Ca., tweeted. "I’m concerned about any policy that could harm consumer access to the internet."

Sen. Kirsten Gillibrand tweeted, "The @FCC just voted to repeal #NetNeutrality, a move that attacks freedom of speech for the millions of people who use the internet every single day."

"#NetNeutrality regulations stifled innovation and competition on the internet and did nothing to protect consumers," Rep. Tom Graves, R-Ga., tweeted. "Returning to a free and open internet will ensure the online marketplace continues to flourish while increasing broadband access for rural and low-income Americans.

He said in another tweet, "I commend @AjitPaiFCC & @FCC for approving a plan to restore internet freedom. It’s the result of an open and transparent process that provided all relevant documents and information to the public ahead of the vote. The plan will repeal Obama-era #NetNeutrality regulations."

"The @FCC is supposed to protect consumers & the public interest on the nation’s communications networks," Sen. Mazie Hirono, D-Hawaii, tweeted. "They failed that mission today, but the fight isn't over. #SaveNetNeutrality."

"Horrible step backwards for a free and open internet," the senator wrote.

Sen. James Lankford, R-Ok., tweeted, "There is often an appropriate need for regulations, but I have always preferred less federal regulation, not more. Moving forward, we must be cautious about issuing preemptive regulations & examine the market need for such rules."

"I plan to introduce a Congressional Review Act resolution that would restore the Open Internet Order and reverse the @FCC’s historic mistake of repealing #NetNeutrality," Sen. Ed Markey, D-Mass., tweeted.

"I support an open Internet, but there is a better way to ensure consumer protections without disrupting the free flow of information and innovation that has made it a cornerstone of the 21st Century economy," Rep. Cathy McMorris Rodgers, R-Wa., said in a statement. "The heavy-handed rules from the Obama administration stifled investment in rural communities, like those in Eastern Washington, and created uncertainty for ISPs in meeting the requirements of those rules. What I want is for everyone to come to the table to find a bipartisan, legislative solution that will protect consumers while not harming investment, innovation, and free-market principles.”

Rep. Lucille Roybal-Allard, D-Ca., said she was "deeply disappointed" by the vote, which she said "jeopardizes Americans’ free speech and our nation’s thriving internet economy."

"We will work in Congress to invalidate the #FCC’s action & keep the Internet open & free for all," Sen. Jack Reed, D-R.I., tweeted.

"Despite its unassuming name, the Obama administration’s net neutrality regulation threatens the free and open internet that has done so much to advance modern society," Speaker Paul Ryan, R-Wis., said in a statement. "The Trump administration’s action to roll back this egregious government overreach into the most innovative space will benefit all users of the internet."

He continued, "As Chairman Pai outlined today, the way to protect consumers is to put the Federal Trade Commission back on the beat to crack down on those who would abuse open access. This new plan of action will open new avenues for telemedicine, distance learning, and future innovations."

"We must do everything we can to stop this egregious decision from taking effect," Sen. Bernie Sanders, I-Vt., tweeted.

In an earlier tweet, Sanders called the vote "an egregious attack on our democracy."

"Americans want better internet access and they want it to be cheaper," House Majority Whip Steve Scalise, R-La., tweeted. "The internet is not broken; the federal government does not need to come in and fix it."

"I will sue to stop the FCC’s illegal rollback of #netneutrality," New York Attorney General Eric Schneiderman, a Democrat, tweeted. "New Yorkers and all Americans deserve a free and open internet."

"Today’s FCC vote overturning #NetNeutrality protections is terrible for all Americans who want equal access to a free and open internet," Sen. Debbie Stabenow, D-Mich., tweeted. "I will introduce a resolution with @SenMarkey and others to reverse this decision!"

Rep. Peter Welch, D-Vt., called the move "a disaster for consumers," adding that he would "soon introduce legislation that will overturn this horrible decision." 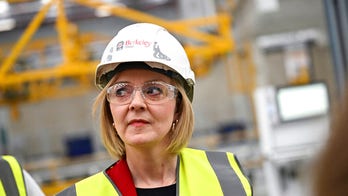