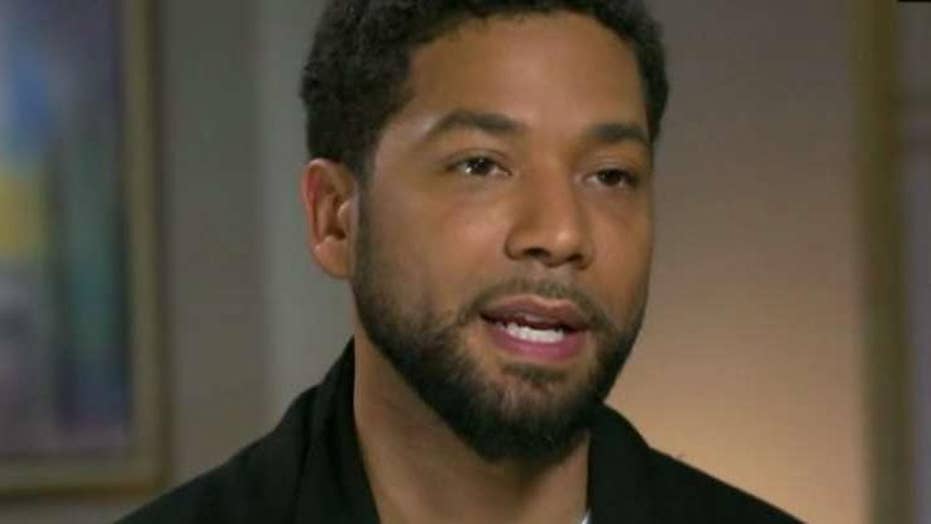 Democratic politicians are backtracking from their initial comments about what was originally described as a hate crime against "Empire" actor Jussie Smollett, after a Chicago police spokesperson said over the weekend the "trajectory of the investigation" shifted and they no longer consider Smollett a victim in the case.

When the incident was first reported last month, Democratic presidential candidate Cory Booker called it "an attempted modern-day lynching." But on Sunday, Booker told reporters he is now withholding comment on the case “until all the information actually comes out from on-the-record sources.”

House Speaker Nancy Pelosi on Jan. 29 tweeted that the “racist, homophobic attack” against Smollett is “an affront to our humanity.” But over the weekend, Pelosi's tweet had been deleted.

Smollett, who is black and openly gay, has claimed he was attacked by two masked men early on Jan. 29 as he walked to his Chicago apartment from a Subway restaurant. Smollett alleged the men shouted racial and anti-gay slurs at him.

Last week, Chicago police questioned two Nigerian brothers in the reported attack but released them Friday without charges. Police spokesman Anthony Guglielmi said the pair had given officers information that had "shifted the trajectory of the investigation.” Local reports have cited sources saying the attack was a hoax, though the Chicago Police Department has not confirmed that.

"While we are not in a position to confirm, deny or comment on the validity of what's been unofficially released, there are some developments in this investigation and detectives have some follow-ups to complete which include speaking to the individual who reported the incident, " Guglielmi said Sunday.

Smollett received an outpouring of support from politicians and celebs when he first went public about the alleged attack in January. Smollett reportedly has claimed at least one of the attackers said to him, "this is MAGA country," in reference to President Trump's campaign slogan.

While some lawmakers are now backtracking, others have stayed mum as the narrative rapidly shifts. Donald Trump Jr., the president’s son, called out Democrats on Twitter who were outspoken initially about the case, but haven’t said anything since the new developments.

“I’m wondering if @KamalaHarris still wants #JusticeForJussie? Will she be as vocal about it now or has she moved on?” Trump Jr. tweeted.

Last month, Sen. Harris, like Booker, referred to the incident as “an attempted modern day lynching.”

“No one should have to fear for their life because of their sexuality or color of their skin,” the 2020 presidential candidate said. “We must confront this hate.”

On Monday, while campaigning in New Hampshire, Harris told reporters she, too, no longer wants to say anything else for now, saying, “I won’t comment until we know the outcome of the investigation.”

Others, like New York Democratic Rep. Alexandria Ocasio-Cortez, said last month, “There is no such thing as ‘racially charged.’ This attack was not ‘possibly’ homophobic. It was a racist and homophobic attack. If you don’t like what is happening to our country, then work to change it. It is no one’s job to water down or sugar-coat the rise of hate crimes.”

John Dickerson, the co-anchor of CBS This Morning, responded to Ocasio-Cortez on Sunday and asked, “Is there an update on this?”

Meanwhile, Smollett's attorneys, Todd S. Pugh and Victor P. Henderson, are vehemently denying that the attack was a hoax.

"As a victim of a hate crime who has cooperated with the police investigation, Jussie Smollett is angered and devastated by recent reports that the perpetrators are individuals he is familiar with,” the lawyers said in a weekend statement. “He has now been further victimized by claims attributed to these alleged perpetrators that Jussie played a role in his own attack. Nothing is further from the truth and anyone claiming otherwise is lying."