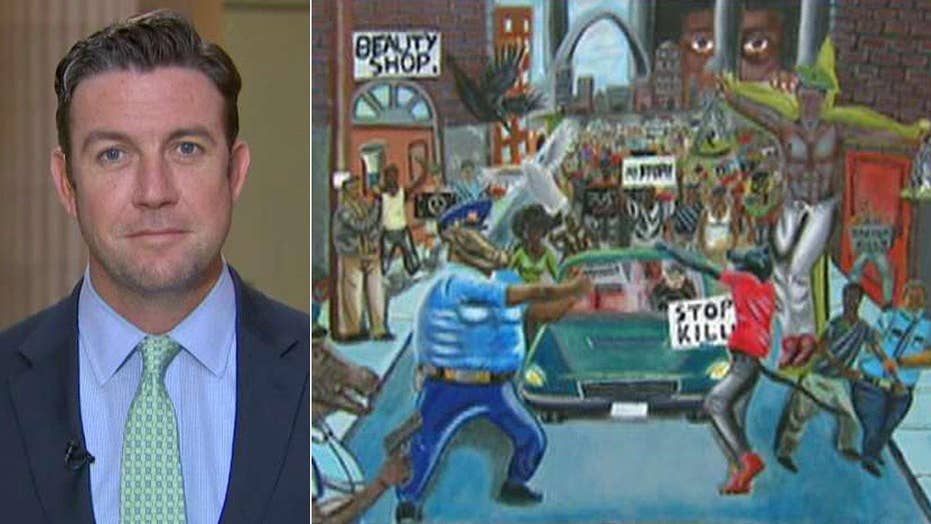 The congressman took down the painting depicting officers as pigs; reaction on 'Fox & Friends'

A controversial painting on Capitol Hill depicting a police officer as a pig was becoming the very definition of a political football Tuesday as Democratic and Republican lawmakers repeatedly passed it back and forth in a growing tit-for-tat.

Democratic lawmakers tried – twice – to put the painting back on display after a GOP colleague took it down Friday amid outrage from law enforcement groups.

But every time they did, it was taken down again. Most recently, Rep. Dana Rohrabacher, R-Calif., took it down late Tuesday afternoon and brought it to the office of Democratic Rep. Lacy Clay, from whose Missouri district the picture came. Clay once again hung it up, saying he was "an expert at hanging artwork."

Rohrabacher called the painting an “insult to all police.”

It’s unclear whether House leadership or some other office will step in to resolve the dispute.

The painting was part of a student-art contest on display along a Capitol Hill corridor and remained largely unnoticed for about seven months, until officer groups began to complain. California Republican Rep. Duncan Hunter on Friday personally removed the painting, saying he was angered by its depiction of police.

But then another Republican colleague, Colorado Rep. Doug Lamborn, took the painting down Tuesday afternoon, bringing it back to Clay’s office and saying it doesn’t belong in the Capitol.

Clay rehung it – again – only for Rohrabacher to take it down. Again.

“It was wrong and it was inappropriate,” Clay said Tuesday morning of efforts to take down the painting. “It’s not about defending an art contest. It’s about defending the Constitution.”

Clay has said he wants Capitol Hill police to file theft charges against Hunter, who after removing the painting returned it to Clay’s congressional office. Clay said he has not heard from the police but does not intend to personally take legal action.

Fox News has learned the Capitol Police are not expected to take up the probe.

Clay insisted he is not “anti-police” and said he “does not agree or disagree with the painting” -- arguing his intent is to defend the First Amendment rights of the 18-year-old artist, David Pulphus.

He argued the artist’s world view has been shaped by the “animalistic” behavior of police officers, particularly the recent, high-profile cases in which unarmed black males died in confrontations with police.

Hunter said Tuesday before the painting was rehung: “It doesn’t belong in the U.S. Capitol. It’s that simple. It violates the rules of the art competition. You cannot have offensive things in the competition and this does.”

He said the rules do not allow paintings with "sensationalistic" subjects or those that depict "contemporary political controversy."

Rep. Barry Loudermilk, R-Ga. told Fox News he wants Congressional officials to replace the painting with a poster of all of the names of police officers who have been shot and killed.

Earlier Tuesday, Hunter said on the Fox News Channel’s “Fox & Friends”: “The Capitol Police aren’t going to arrest me for taking down a picture that portrays them as pigs.”

He plans to ask the Architect of the Capitol to have the painting removed.