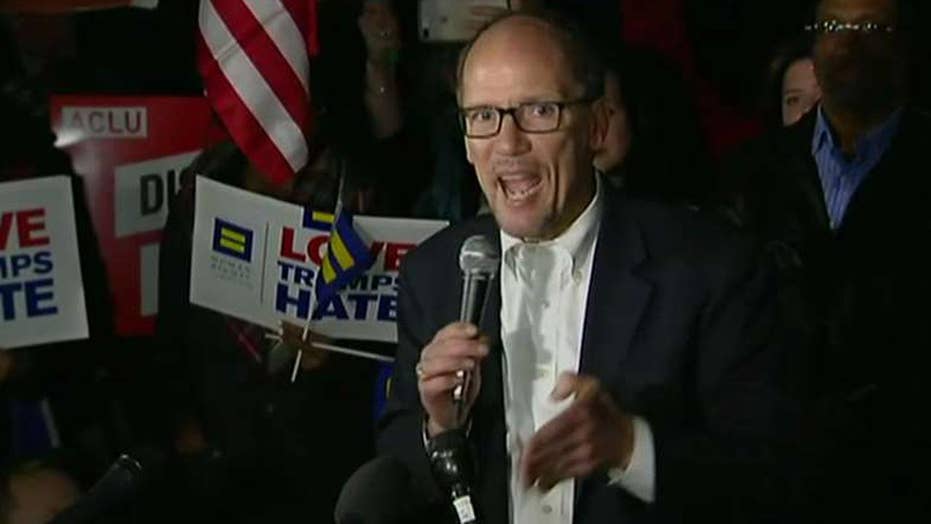 Democratic National Committee Chairman Tom Perez is taking a part-time, Ivy League teaching gig, after saying earlier this year that the chairmanship should be a “full time job.”

Perez made the comment in late 2016 when he joined the competition for the DNC post against Ralph Ellison, a full-time Minnesota Democratic congressman, and while Perez was still pondering a 2018 run for Maryland governor.

He also reportedly said at the time that the party needs to have “someone committed here for the long haul."

Washington Republicans pounced on the announcement Thursday that Perez would be a senior fellow at his alma mater, Brown University.

“The DNC can’t raise money, their ‘Better Deal’ slogan flopped, the Unity Tours were a disaster -- and Tom Perez thinks it’s a good time for a side gig?” the Republican National Committee asked.

Brown declined to comment Saturday on whether Perez is being paid for the one-year appointment and how often he must appear on campus. "Beyond position titles and dates of service, we are not at liberty to disclose deails related to personnel," a Brown spokesman said.

The announcement also comes a few weeks after the DNC posted its worst July fundraising numbers in a decade, raising questions about why the party machine cannot capitalize on President Trump’s low approval ratings and whether Perez is up to the task.

The DNC raised $3.8 million in July, compared to $10.2 million for the Republican National Committee. The tally fit a pattern for the Democrats, who have posted a string of depressed fundraising numbers month after month this year, even after Perez took charge in February.

Perez, after the small July haul was announced, attributed the disappointing results to understaffing and too few fundraisers as he tries to rebuild the group in the wake of 2016's damaging controversies.

Many Democrats seem willing to extend Perez a longer honeymoon, considering the situation he inherited.

However, time is running out, with the 2018 congressional mid-terms right around the corner.

The Democratic Party still appears divided between the progressive wing, including Sanders loyalists and those who backed Ellison for DNC chairman, and the establishment wing, which backed Clinton in last year’s White House race.

The divide was clearly on display earlier this year during the DNC’s so-called Unity Tour, in which Perez and Ellison appeared on stage amid questions about whether the party should back pro-life candidates.