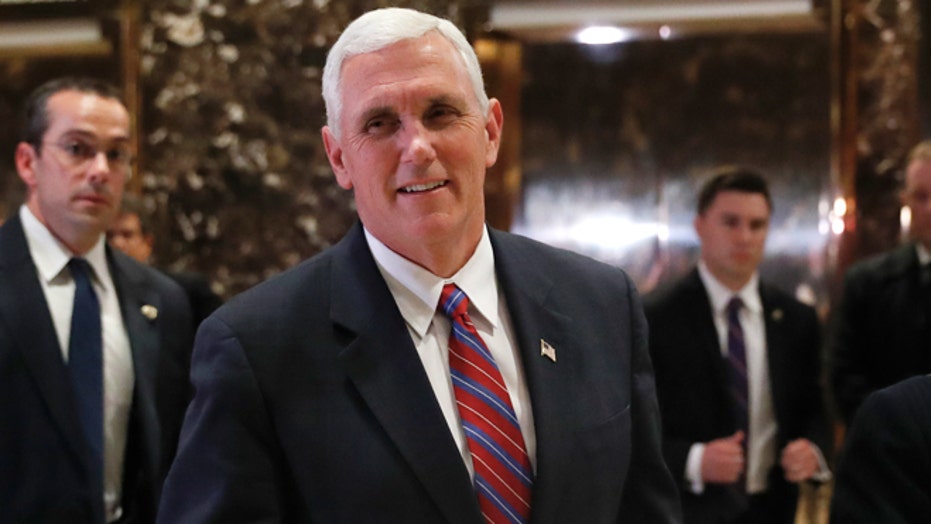 Is Pence fulfilling Trump's promise to 'drain the swamp'?

The move to get rid of lobbyists in key roles was one of the first decisions made by Vice President-elect Mike Pence in his role overseeing the construction of a Trump administration.

One source said the decision to remove the lobbyists "makes good on [Trump's] vision of how he wants his government constructed."

Tuesday evening, Pence formally signed a memorandum of understanding putting him in charge of the transition team. A similar document had been signed by New Jersey Gov. Chris Christie, who spent months running transition operations before his demotion last week.

The switch slowed Trump's ability to coordinate the transfer of power with the Obama administration. White House spokeswoman Brandi Hoffine told the Associated Press the administration was waiting on more documents required by law before agencies could begin sharing information with the transition team.

Pence ignored questions from reporters Tuesday, both as he entered Trump Tower with a thick binder tucked under his arm, and as he left six hours later.

A person familiar with the transition efforts told AP different factions in Trump's team "are fighting for power."

"That organization right now is not designed to work," according to the person close to the efforts, who like others involved in the transition, insisted on anonymity because they were not authorized to publicly discuss the internal process.

The group organized by Christie had featured a litany of lobbyists, former bureaucrats, academics and corporate lawyers. That caused consternation from Trump, who won cheers on the campaign trail for his repeated promises to "drain the swamp" in Washington.

It had also drawn the attention of Sen. Elizabeth Warren, D-Mass., who repeatedly attacked Trump during the campaign on behalf of his opponent, Hillary Clinton. On Tuesday, Warren called on Trump to replace more than 20 members of his transition team with ties to Wall Street firms and other corporations.

"If you refuse," Warren wrote, "I will oppose you, every step of the way, for the next four years. I will champion the millions of Americans you will fail to protect. I will track your every move, and I will remind Americans, every day, of the actions you take that fail them."

Among those who departed Trump's transition team Tuesday was former Rep. Mike Rogers, a Christie recruit and a respected Republican voice on national security issues. The Wall Street Journal reported that Frank Gaffney, a former defense official in the Reagan administration, had been brought in to assist on national security issues, along with Rep. Devin Nunes, R-Calif., and former Rep. Pete Hoekstra.

Former GOP national security official Eliot Cohen blasted Trump's team on Twitter, calling them "angry, arrogant." Cohen opposed Trump during the campaign, but in recent days, he said those who feel duty-bound to work in a Trump administration should do so. But he said Tuesday that after an exchange with Trump's team, he had "changed my recommendation."

Trump's transition team was also reviewing secretary of state candidate Rudy Giuliani's paid consulting work for foreign governments, which could delay a nomination or bump Giuliani to a different position, according to a person briefed on the matter but not authorized to speak publicly about it.

Giuliani founded his own firm, Giuliani Partners, in 2001, and helped businesses on behalf of foreign governments, including Qatar, Saudi Arabia and Venezuela. He also advised TransCanada, which sought to build the controversial Keystone XL pipeline, and helped the maker of the painkiller drug OxyContin settle a dispute with the Drug Enforcement Administration.

Businessman Carl Icahn disclosed on Twitter, based on conversations with the president-elect, that Trump was considering Steve Mnuchin, a former Goldman Sachs banker, and Wilbur Ross, a billionaire investor, to lead the Treasury and Commerce departments.

Trump himself broke with protocol Tuesday night by leaving Trump Tower without his press contingent. The transition team had told reporters and photographers there would be no movement by the president-elect for the rest of the day and night, but less than two hours later a presidential-style motorcade rolled out of the building, suggesting that Trump was on the move and leaving reporters scrambling.

A short time later a tweet appeared on Trump's account: "Very organized process taking place as I decide on Cabinet and many other positions. I am the only one who knows who the finalists are!"

Fox News' Nick Kalman and the Associated Press contributed to this report.