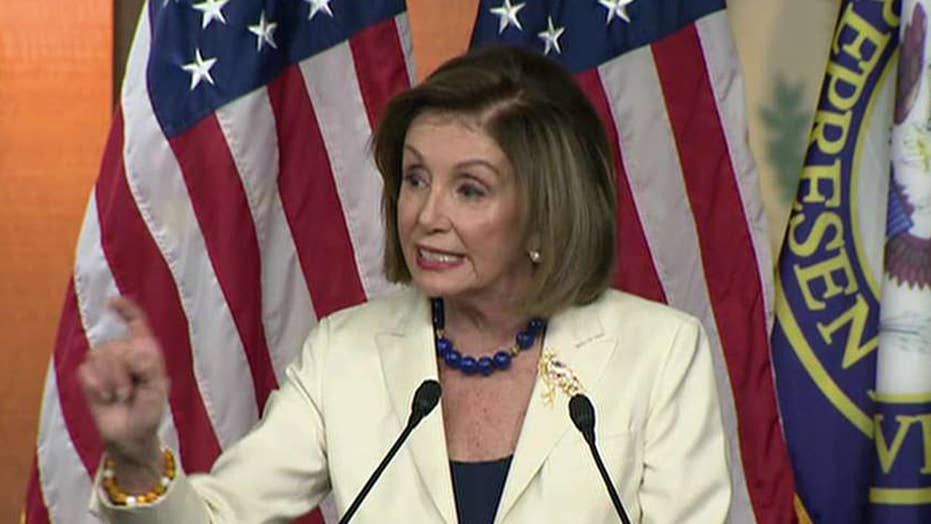 Pelosi insists she doesn't hate Trump, says she prays for him

House Speaker Nancy Pelosi sought to move on from questions about impeachment during a televised town hall Thursday night, even as she insisted she wasn't bothered at all by polls showing sagging support for the probe against President Trump.

Pelosi, who also claimed former President Bill Clinton was impeached only for "being stupid," made her comments at the CNN event just hours after she appeared at a fiery news conference to direct the House Judiciary Committee to begin drafting articles of impeachment against Trump.

"Can we not have any more questions about impeachment?" Pelosi asked at one point. "I don't mind questions, but to ask me questions through the prism of the White House is like, what?"

Moderator Jake Tapper noted that polls in swing districts show that moderate voters have begun to oppose impeachment, and asked whether Pelosi would regret the proceedings if they ultimately help Trump win re-election.

"This isn't about politics at all," Pelosi insisted. "This is about patriotism. It's not about partisanship. It's about honoring our oath of office. This is the first president that has committed all of these things as the constitutional experts said yesterday. Nobody has ever even come close. Not Richard Nixon even came close to his dishonoring his own oath of office."

"This is the first president that has committed all of these things ... Nobody has ever even come close. Not Richard Nixon even came close to his dishonoring his own oath of office."

PELOSI SNAPS AT REPORTER, INSISTS BEING CATHOLIC MEANS SHE CANNOT HATE ANYONE

The Trump campaign highlighted internal polling on Thursday showing that moderate Democrats in districts won by the president in 2016 were turning against impeachment.

"Nancy Pelosi is marching members of her caucus off the plank and into the abyss," Trump 2020 Campaign manager Brad Parscale tweeted, alongside polling data. "Impeachment is killing her freshman members and polling proves it."

"Nancy Pelosi is marching members of her caucus off the plank and into the abyss. Impeachment is killing her freshman members and polling proves it."

Sensing a possible opening, the Republican National Committee (RNC) has ramped up the pressure on these Democrats in pro-Trump districts. As reported by The Daily Caller, the RNC is running ads urging voters to pick a lawmaker who “won’t waste taxpayer $$$ on partisan impeachment.” And, Wall Street Journal Editorial Page Deputy Editor Dan Henninger told Fox News that some of these 31 Democrats are "really reluctant to take this vote," especially now.

DOES PELOSI HAVE THE VOTES ON IMPEACHMENT?

But, Pelosi made clear her mind had changed on that point.

"The facts are clear," she told Tapper at the town hall. "The Constitution is clear. The president violated the Constitution. And so I think it is important for us to proceed. If we were not to proceed, it would say to any president, any future president, whoever she or he may be, Democratic or Republican, that our democracy is gone, the president is king, he can do whatever he wants in violation of the law, ignoring the acts of Congress, undermining our system of checks and balances."

The speaker also elaborated on her outburst earlier in the day after a reporter asked her whether she "hates" the president. Pelosi, at the time, emphasized that she was a Catholic and does not hate anyone, although she said she felt Trump was a corrupt coward.

"The word 'to hate' a person, that just doesn't happen," Pelosi said at the town hall. "The word 'hate' is a terrible word. You might reserve it for vanilla ice cream for something like that, I'm a chocoholic, but not for a person. And so for him to say that was really disgusting to me. And of course he was quoting somebody else."

Pelosi further argued that Clinton was impeached for "being stupid," in response to Republican claims that Democrats were hypocritical on the issue. House Judiciary Committee Chairman Jerry Nadler, D-N.Y., had blasted impeachment in 1998 as the "undoing of a national election" and argued that it should be reserved for extreme situations.

"Some of these same people are saying, 'Oh, this doesn't rise to impeachment,'" Pelosi said at one point in the CNN event. "Right there, impeaching Bill Clinton for being stupid in terms of something like that. I mean, I love him, I think he was a great president, but being stupid in terms of that, what would somebody do, not to embarrass their family, but in any event, so they did Bill Clinton, now they want me to do George Bush, I didn't want it to be a way of life in our country."

Clinton was impeached by the GOP-held House for perjury and obstruction of justice in December 1998, only to be acquitted by the Democrat-controlled Senate in February 1999. Clinton had been accused of making false statements in connection with a sexual harassment lawsuit filed by Paula Jones, a former Arkansas state employee, and had falsely denied under oath that he had "sexual relations" or been alone with a White House intern, Monica Lewinsky.

Amid the impeachment effort, lawmakers also have to deal with a looming government shutdown that could take effect Dec. 20 unless Congress passes spending legislation to avoid it. With just over two weeks to do so -- and holidays coming soon after -- impeachment could find itself on the House's back burner until the new year.

At the town hall, Pelosi said she didn't think "we're headed for a shutdown" this month, and floated the possibility of a continuing resolution to delay the issue.

"I have to admit that today was quite historic," Pelosi added. "It was taking us across a threshold on this, that we just had no choice. I do hope that it would be remembered in a way that honors the vision of our founders, what they had in mind for establishing a democracy."