The leading House Democrat pledges transparency, bipartisanship and unity before the new Congress as she lays out the agenda for the term.

Speaker Nancy Pelosi, reclaiming the gavel on Thursday, described her party's majority in the House of Representatives as part of a "new dawn" -- and outlined an agenda that includes expanded gun background checks, protections for some illegal immigrants, and a check on the Trump administration's power.

“Our nation is at an historic moment,” she said moments after being elected. “Two months ago, the American people spoke, and demanded a new dawn.”

Pelosi returns to the speakership after eight years in the minority, and is the first person to reprise the role since 1955.

She faces a number of political challenges, including an ongoing partial government shutdown, a rising socialist presence attempting to drag her further to the left, and Republican control of both the Senate and the White House.

In her remarks, she promised to work toward “building an economy that gives all Americans the tools they need to succeed in the 21st Century: public education, workforce development, good-paying jobs and secure pensions.”

On the partial shutdown, Pelosi is planning to move legislation imminently that would fund the government but not President Trump's border wall. She said Thursday that Democrats would offer Senate Republicans legislation to end the impasse that would “meet the needs of the American people, to protect our borders, and to respect our workers.”  Trump has demanded $5 billion for a wall on the southern border, a request Democrats have denied, triggering the partial shutdown about to enter its third week.

With Democrats only controlling one chamber, Pelosi promised a “transparent, bipartisan and unifying” approach, but did not back down from a liberal policy push on everything from climate change (“the existential threat of our time”) to gun control.

In her address, she said the House would push for “an economic decision for America’s global preeminence in green technology,” and protections for people with pre-existing health conditions.

She also called for protections for undocumented immigrants who came to the country as children: “We will make America more American by protecting our patriotic, courageous Dreamers!”

Pelosi then paid tribute to Republican President George H.W. Bush, who died last month, calling him a cherished former member who “rose to become a beloved president.” She also said she “looked forward to working with” Trump on infrastructure funding. 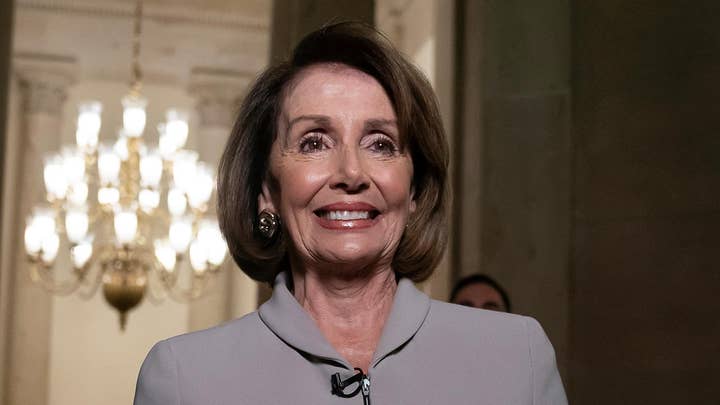 She made no reference to calls from the Democratic Party base for efforts to impeach Trump, something that she has regularly poured cold water on -- urging her party to focus on kitchen-table issues instead.

But she did say that Americans had “called upon the beauty of our Constitution, our system of checks and balances that protects our democracy, remembering that the legislative branch is Article I: the first branch of government, co-equal to the president and judiciary.”