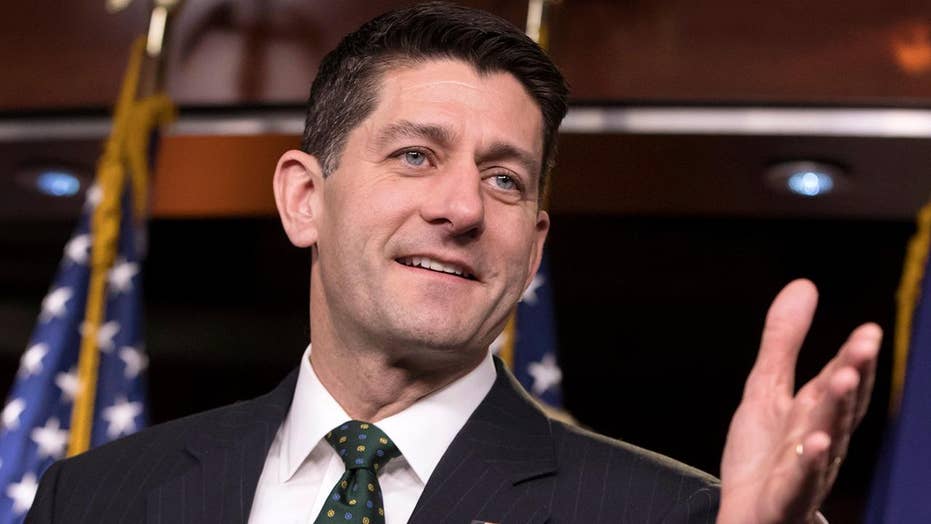 Reaction to the Politico report on 'Outnumbered.'

House Speaker Paul Ryan’s political future returned to the speculation spotlight Thursday amid reports that he’s eyeing an exit from Congress after the 2018 midterms.

Politico Magazine published a lengthy article, detailing how Ryan has “made it known” to confidants this will be his final term as speaker. On the cusp of a major legislative victory – passage of a tax overhaul – Ryan would, the thinking goes, spend 2018 trying to tackle entitlement reform, while fundraising in an all-out campaign to keep the House majority.

Then he could return to Wisconsin, leaving it all on the field.

Ryan and his aides were quick to dismiss the chatter publicly.

“No,” Ryan replied, chuckling when asked at the end of a Thursday press conference if he’s quitting soon.

“This is pure speculation. As the speaker himself said today, he’s not going anywhere any time soon,” spokeswoman AshLee Strong said in a statement.

Another source close to Ryan said: “Speaker Ryan is fully committed to advancing a bold conservative agenda in 2018 and protecting the majority. Any gossip to the contrary is completely baseless and without merit.”

The statements did not speak to whether Ryan might consider stepping down in early 2019, however, ahead of the next congressional term and after the midterm elections.

Ryan reluctantly took the speakership after John Boehner stepped down in 2015.

Despite his rocky relationship with then-candidate Donald Trump during the 2016 presidential campaign, he has mostly maintained an alliance with the president – chiding Trump over controversies like his response to the Charlottesville, Va., violence, while staying in lockstep on legislative priorities like the tax overhaul.

The Politico article noted, however, that Ryan is approaching a rocky period, when he’ll have to muscle through a series of critical bills and could be forced to strike deals with Democrats to make it happen. Politico reported that Majority Leader Kevin McCarthy , R-Calif., and Majority Whip Steve Scalise, R-La., two likely successors, have been meeting with lawmakers “loyal to them” to strategize about what might happen if and when Ryan leaves.

Former GOP Rep. Jason Chaffetz, a Fox News contributor, said Thursday on “Outnumbered Overtime”  that while he does not have inside knowledge, “it wouldn’t surprise me” if Ryan retires after the midterms.

“It is an incredibly difficult job to be Speaker of the House,” he said, adding that passing tax reform could allow him to say he’s done “the biggest thing he can possibly accomplish.”

Chaffetz also said he would not be surprised if Ryan even declares it’s “time to make a change” after returning from the holiday break.

Ryan aides, though, note the speaker recently transferred $1.9 million to the National Republican Congressional Committee, he is fully geared up for a re-election, and he has helped the NRCC win four special elections in 2017.