House will not vote on Rosenstein impeachment before recess

“I don’t think we should be cavalier with this process,” Ryan told reporters when asked about the newly introduced articles of impeachment.

The speaker’s comments splashed cold water on the impeachment push after the articles were filed Wednesday night -- though there were already signs conservatives were dialing back the push and want to use the threat more to pressure the Justice Department to produce documents pertaining to the Russia probe.

Sources told Fox News earlier Thursday that House Republicans were not planning to pursue the impeachment articles before the summer recess. 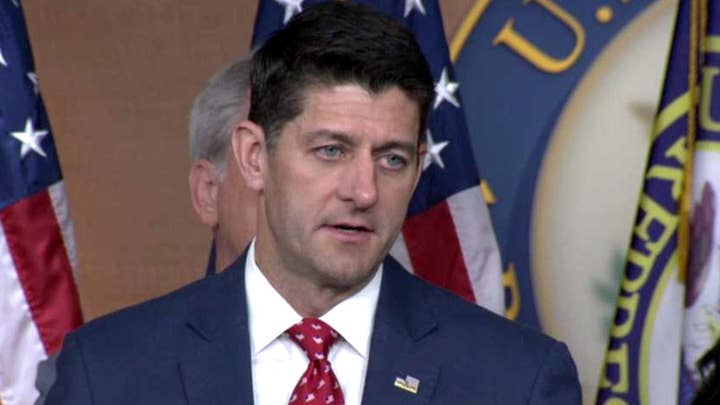 “Now this is in Rod Rosenstein’s court,” House Freedom Caucus leader Mark Meadows, R-N.C., said Thursday, while clarifying that a contempt resolution, rather than impeachment, would be their first course of action if they don't extract documents.

"My patience is running thin," he added.

A group of 11 House Republicans including Meadows had introduced five articles of impeachment against Rosenstein, who oversees the Russia probe, on Wednesday evening.

The articles accuse Rosenstein of intentionally withholding documents and overseeing the “potentially improper authorization” of surveillance against Trump associates.

It was not immediately clear whether the House would consider the resolution before lawmakers begin the August recess Thursday afternoon; the House will reconvene Sept. 4.

In an exclusive interview on Fox News' "The Ingraham Angle" on Wednesday night, Meadows had said it would be possible to push a so-called "privileged" resolution as early as Thursday morning, which would require a vote within two days. 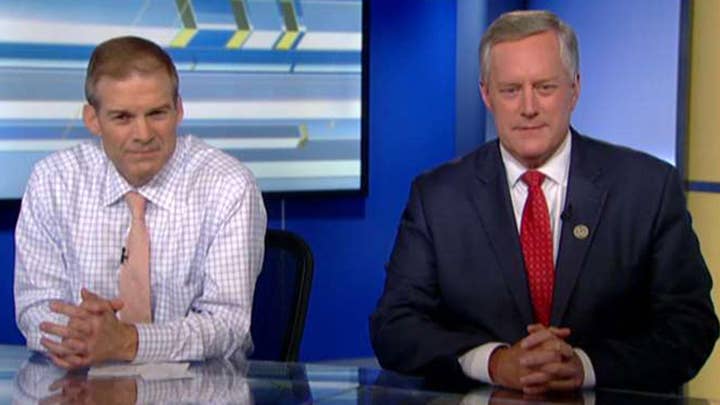 But sources told Fox News there will be no such effort on Thursday, pushing off any consideration until the fall.

Fox News is told House GOP leaders huddled with Meadows and fellow Freedom Caucus leader Rep. Jim Jordan, Ohio, and agreed that the best path is to continue to apply pressure on the DOJ to produce documents – keeping threats of contempt of Congress and impeachment resolutions on the table. The House has only initiated impeachment proceedings 62 times in the history of the country.

The resolution itself states it will be "referred to the Committee," meaning the Judiciary Committee, for further review. That language alone had suggested the full House will not immediately consider the articles of impeachment.

Attorney General Jeff Sessions, meanwhile, said Thursday that he has confidence in Rosenstein, and urged Congress to focus instead on immigration.

Justice Department officials maintain they have been responding to numerous document requests.

DOJ officials say the only document that Congress has specifically asked to see and been denied access to is the Aug. 2, 2017 “scope memo,” from Rosenstein to Special Counsel Robert Mueller regarding the scope of the Russia investigation. Officials say that’s because it is squarely within the confines of an ongoing probe.

GOP lawmakers cited that memo in the impeachment articles, criticizing Rosenstein for not providing a “less-redacted version” of the memo, even in a classified setting.

It’s unclear whether Republicans will resume this effort after the recess.

Both Meadows and Jordan told host Laura Ingraham the push was long overdue.

"For nine months, we've asked for documents, and that's all we want," Meadows said. "Not only have subpoenas been ignored, but information has been hidden, efforts have been stonewalled."

But Rep. Adam Schiff, D-Calif., the ranking member of the House Intelligence Committee, tweeted that the articles "were filed in bad faith and show [the] extraordinary lengths to which House Republicans will go to protect [President] Trump."

In one article of impeachment, Rosenstein is accused of improperly signing off on the FISA surveillance warrant application against ex-Trump aide Carter Page.

The application heavily relied on the infamous Steele dossier, which was funded by the Clinton campaign and the DNC and contained unverified, salacious allegations against Trump. The application also cited concerns about Page’s Russian contacts.

The articles also assert Rosenstein has a conflict of interest for signing off on the final Page surveillance warrant and not later recusing himself or recommending a second special counsel as some Republicans have sought.

According to a House Republican memo on that warrant released earlier this year, information about the dossier’s author and his anti-Trump bias was withheld from the national security court that approved the spying. After author and ex-British spy Christopher Steele was fired for lying to the FBI, he maintained contact with senior DOJ official Bruce Ohr, whose wife worked for Fusion GPS, the firm behind the dossier.

Rosenstein named Mueller to lead the Trump-Russia probe after Rosenstein’s boss, Sessions, recused himself from the investigation because of Sessions’ own role in the Trump campaign.

He has since clashed with House Republicans for months over requests for Department of Justice documents. GOP leaders grilled Rosenstein at a hearing in June for what they called his inadequate transparency.

In recent weeks, calls by top Republicans to remove Rosenstein grew louder. A simple majority of the House would suffice to impeach Rosenstein, but a two-thirds vote of the Senate would be required to remove him.

The move came about two hours after GOP lawmakers met with Justice Department officials who have been working to provide documents to several congressional committees about decisions made during the 2016 presidential campaign. The department has provided lawmakers with more than 800,000 documents, but Meadows said after the meeting that there was still "frustration" with how Justice has handled the oversight requests.