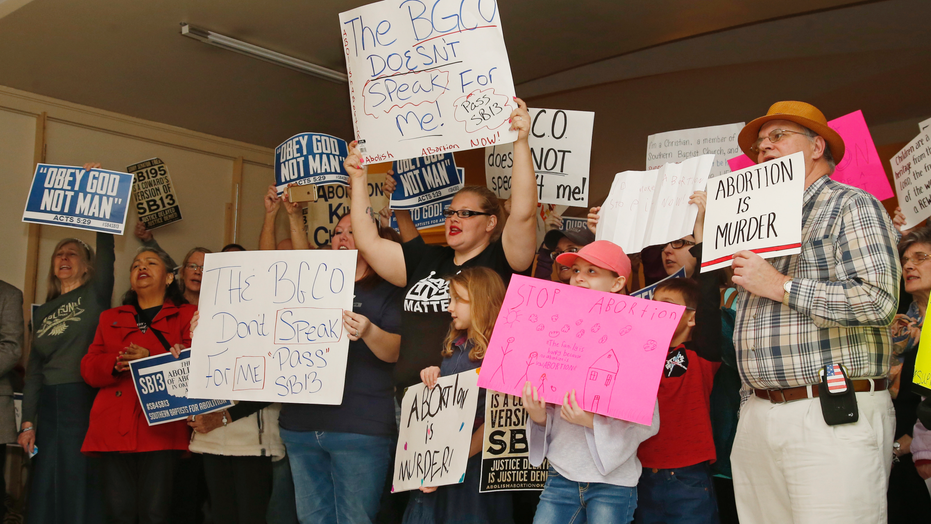 An Oklahoma judge on Wednesday temporarily blocked a new law requiring doctors who administer medication abortions to inform women that the process may be reversed.

The state’s Republican-led Legislature approved the measure and it was signed into law by Gov. Kevin Stitt earlier this year. The legislation requires providers to tell women who are pursuing medication abortions, which consist of a series of two pills, that the process may be reversed if a woman has second thoughts after the first pill is ingested. It would also require signs be posted inside clinics where medication abortions are performed. Doctors who do not comply would face felony charges.

"The judge didn't rule on the merits of the case and only decided to retain the status quo moving forward, pending more evidence," Oklahoma Attorney General Mike Hunter said in a statement after the judge's ruling. "The state remains committed to defending this law that requires doctors to inform women they can opt to reverse the process."

OKLAHOMA COUNTY AGREES TO $12.5 MILLION SETTLEMENT OVER DEATH OF INMATE LEFT IN RESTRAINT CHAIR FOR 2 DAYS

Abortion rights advocates have said requiring doctors to tell women their medication abortion can be reversed is forcing them to provide misleading information. “This law represents the Legislature telling doctors how to do their job,” said Eileen Citron, a lawyer for Tulsa Women’s Reproductive Clinic.

Medication abortions are performed by a woman ingesting one pill called mifepristone. The second pill, misopristol can be taken up to 48 hours later to induce a process similar to a miscarriage. It can be used up to 10 weeks into a pregnancy.

Pro-life advocates say that the process can be reversed by giving the patient progesterone. As many as half of women who take only mifepristone, even without the assistance of progesterone injections, continue their pregnancies, according to the American Congress of Obstetricians and Gynecologists.

"It hurts women in Oklahoma not having this disclosure," Oklahoma Assistant Solicitor General Bryan Cleveland told the judge.

Attorneys for the state said there are hundreds of cases in which children lived despite their mothers taking the first pill.

Oklahoma is one of eight states to pass or amend a law requiring doctors to inform patients they can still have live births after initiating a medication abortion. Six states -- Arkansas, Idaho, Kentucky, Nebraska, Utah and South Dakota --  have such laws currently in effect. Oklahoma and North Dakota have signed such laws but they are not currently effective.

Last month in North Dakota a federal judge blocked a similar bill, twith he judge arguing the legislation would “violate a physician's right not to speak and go far beyond any informed consent laws addressed by the United States Supreme Court."

In July, an Oklahoma judge upheld a 2015 law restricting dilation and evacuation abortions after 14 weeks of pregnancy. Tulsa Women’s Reproductive Clinic on Monday also requested an injunction to put this measure on hold.