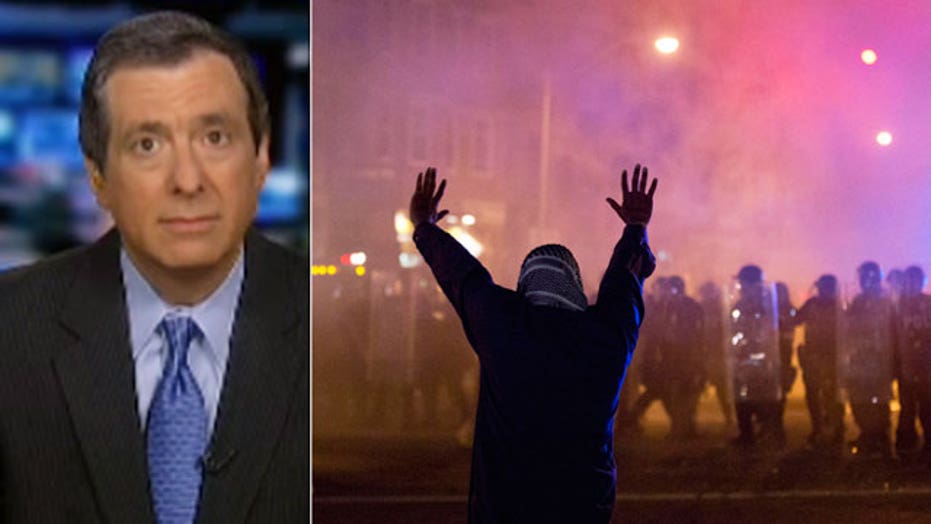 Kurtz: Were the media late to Baltimore?

We’ve endured Ferguson, and Staten Island, and North Charleston, and now Baltimore, each a major media story, each sparking a debate that remains unresolved.

The conservative side tends to focus on the criminals who inflict destruction on minority communities, the liberal side on police misconduct and the underlying anger that leads to such explosions. And in the end little progress is made, and the media, and the country, gradually move on.

In three of the cases since Michael Brown was found to have attacked Darren Wilson, the confrontations, each captured on cellphone video, have been truly disturbing. We’ve seen police officers put an overweight black man, Eric Garner, in a chokehold that led to his death; an officer shoot a black man who owed child support, Walter Scott, in the back as he ran away; and officers arrest a petty black criminal, Freddie Gray, who died from spinal cord injuries he suffered while in custody.

Yet the media have a responsibility to remind folks that whatever the history of tensions in some communities, most police officers are honest people who risk their lives on a daily basis.

We have been having this argument since the 1968 riots in Baltimore and Washington, since the 1992 riots in South-Central L.A., since the 2001 riots in Cincinnati, and now it’s déjà vu all over again.

President Obama’s rambling, six-point answer to a reporter’s question about Baltimore captured the complexity of the debate—and, perhaps unintentionally, why it is so hard to gain any ground.

Then he said that police departments and communities “have to do some soul searching”—although politicians are not generally in the business of advising on souls.

Then he got into root causes: “If you have impoverished communities that have been stripped away of opportunity, where children are born into abject poverty; they’ve got parents -- often because of substance-abuse problems or incarceration or lack of education themselves -- can't do right by their kids; if it’s more likely that those kids end up in jail or dead, than they go to college. In communities where there are no fathers who can provide guidance to young men; communities where there’s no investment, and manufacturing has been stripped away; and drugs have flooded the community, and the drug industry ends up being the primary employer for a whole lot of folks.”

Those are good points, but these are intractable problems that have been festering for decades.

Then, lest he sound too sympathetic, the president zig-zagged to saying there was “no excuse” for the violence in Baltimore, that the perpetrators were stealing and committing arson, not protesting. Then came a media riff on how “one burning building will be looped on television over and over and over again.”

And then he went off on “too many instances” of police mistreating people, primarily poor blacks.

Finally, with a plea for social programs -- early education, job training, criminal justice reform – Obama said “we’ll go through the same cycles of periodic conflicts between the police and communities and the occasional riots in the streets, and everybody will feign concern until it goes away, and then we go about our business as usual.”

I can’t argue with that last point. The media, reflecting society, excel at outrage that quickly burns itself out.

But as a matter of political messaging, Obama ticked off so many different things—and without much passion—that his message was muddled.

The media thrive on conflict, so there’s often an assumption that different factions must be at odds. If you attack the hoodlums and thugs who loot and burn, you’re unsympathetic to the poverty that some insist on blaming. If you attack police officers for killing unarmed black men, you’re unsympathetic to the pressures that cops face in fighting crime.

Take these examples from the right and left. National Review has a piece headlined “Riot-Plagued Baltimore Is a Catastrophe Entirely of the Democratic Party’s Own Making”:

“No Republican, and certainly no conservative, has left so much as a thumbprint on the public institutions of Baltimore in a generation. Baltimore’s police department is, like Detroit’s economy and Atlanta’s schools, the product of the progressive wing of the Democratic party enabled in no small part by black identity politics. This is entirely a left-wing project, and a Democratic-party project. When will the Left be held to account for the brutality in Baltimore — brutality for which it bears a measure of responsibility on both sides?”

And Salon has a piece headlined “Baltimore’s violent protestors are right: Smashing police cars is a legitimate political strategy”:

“Non-violence is a type of political performance designed to raise awareness and win over sympathy of those with privilege. When those on the outside of struggle—the white, the wealthy, the straight, the able-bodied, the masculine—have demonstrated repeatedly that they do not care, are not invested, are not going to step in the line of fire to defend the oppressed, this is a futile political strategy.

“Militance is about direct action which defends our communities from violence. It is about responses which meet the political goals of our communities in the moment, and deal with the repercussions as they come. It is about saying no, firmly drawing and holding boundaries, demanding the return of stolen resources.”

So it’s either all the Democrats’ fault, or it’s fine to riot and destroy communities—all finger-pointing and polemics.

Let’s close with a question for the media, posed by an African-American woman identifying herself as Danielle, when MSNBC’s Thomas Roberts interviewed her in Baltimore:

“My question to you is, when we were out here protesting all last week, for six days straight peacefully, there were no news cameras, there were no helicopters, there was no riot gear, and nobody heard us.

“So now that we’ve burned down buildings and set businesses on fire and looted buildings, now all of the sudden everybody wants to hear us. Why does it take a catastrophe like this in order for America to hear our cry?”