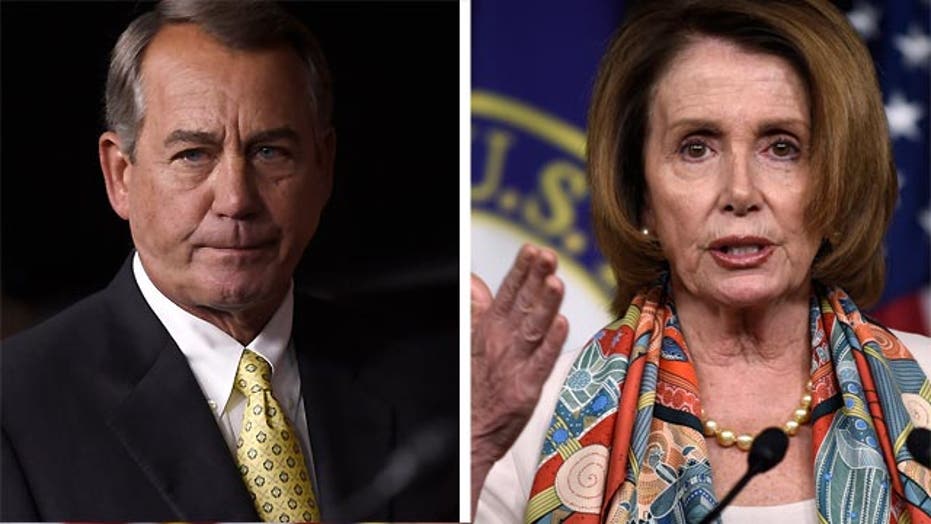 The stunning defeat of President Obama’s trade agenda has resulted in an odd mix of winners and losers headed for a rematch next week over an historic proposal that if passed would impact an estimated 40 percent of the global economy.

The agenda was defeated Friday when the GOP-led House voted against a bill, included in the overall proposal, to extended assistance to American workers impacted by previous trade deals, despite the president’s personal plea to chamber Democrats for their support.

The White House has dismissed the defeat as “procedural snafu.” But the 302-123 vote was clearly a loss for Obama, who unsuccessfully ventured Friday to Capitol Hill to garner support from progressive, pro-labor House Democrats, who so far have emerged as winners.

On Saturday, Obama, in his weekly public address, said that the workers’ aid, through the Trade Adjustment Assistance legislation, provides job-training, community-college education and other help for the tens of thousands of American workers each year who have been hurt by past trade deals -- “the kind we’re not going to repeat again.”

“For the sake of those workers, their families and their communities, I urge those members of Congress who voted against Trade Adjustment Assistance to reconsider,” he also said.

The assistance is set to expire in September.

The overall proposal, known as Trade Promotion Authority, would give the president the power to "fast-track" or negotiate trade deals that Congress could approve or reject, but not amend.

Obama hoped to use the authority to complete a sweeping pact with 11 Pacific Rim nations, which would constitute the economic centerpiece of his second term.

Pro-trade House Republicans, including House Speaker John Boehner and his leadership team, in a rare instance, support the Obama proposal. And they are vowing a rematch.

“This isn’t over yet,” said Wisconsin GOP Rep. Paul Ryan, chairman of the House Ways and Means Committee. “The people of this country need a faster economy. They need more opportunity. We need open markets. We need to write the rules of the global economy instead of having others do so.”

The worker-assistance bill was added to entice House Democrats to support the overall legislation.

However, it wasn’t enough for House Minority Leader Nancy Pelosi, an ardent Obama supporter who accompanied the president in his closed-door meeting Friday with fellow Democrats.

Afterward, Pelosi said the nay votes cast by her and other House members was a “clear indication” that the chamber wants “a better deal for the American people.”

The California lawmaker, with strong backing from labor unions, also suggested the likelihood of the legislation passing would “greatly increase” if the chamber passes a “robust” highway bill.

However, Pelosi’s opposition to the proposal and her failure to garner enough votes from her caucus raises more questions about her leadership strength after roughly nine years as the chamber’s top Democrat.

Larry Hanley, international president of the Amalgamated Transit Union, the largest labor group representing U.S. and Canadian transit workers, said after the failed House vote: “This was a victory for the environment, labor, for working families and for democracy.

“But unfortunately, fast-track and TPP are not dead yet. … So, we need to keep the pressure up.”

Critics of the proposal argue largely that if passed it would send jobs overseas and put too many Americans out of work.

The margin of defeat Friday also raises questions about how Obama might be able to persuade at least 80 more Democrats to vote for the bill and secure passage.

However, the House passed a symbolic vote on the "fast-track" legislation 219-211 after the failed TAA measure, indicating the entire bill appears to have enough overall bipartisan support.