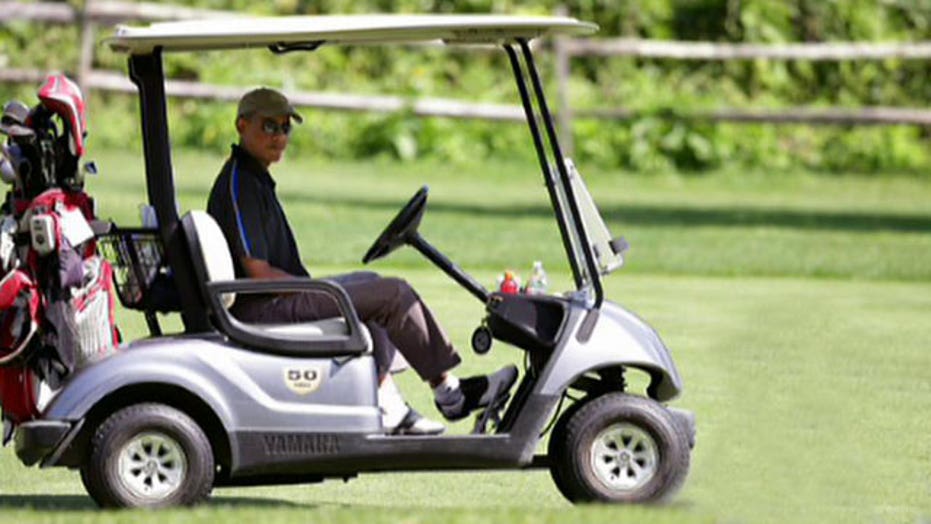 President Obama has few remaining friends—either in his own party or in the media.

That’s the unmistakable conclusion of two pieces this week in the New York Times. Just about everyone, it seems, is down on his single, solitary nature.

I’ve been saying for a year now that the president’s liberal media allies have soured on him. It started with the ObamaCare debacle and continued through his seeming passivity or slow reaction time in the wake of the VA scandal, the Bowe Bergdahl mess, the military collapse in Iraq and so on. At this point they’re basically Waiting for Hillary.

What is striking now is a growing sense, fairly or unfairly, that Obama is not capable of rising to the occasion, that he just doesn’t like politics, that he’s disengaged, that despite his soaring rhetoric in 2008 he has a passion deficit.

All the criticism about him playing golf and being at Martha’s Vineyard is kind of a code for his supposedly being unplugged from the job.

A Times news story opens with a killer anecdote about the president meeting with Harry Reid and Mitch McConnell, which turned to Democratic complaints that the GOP was bottling up a number of Obama’s ambassadorial nominees.

“Mr. Obama quickly dismissed the matter. ‘You and Mitch work it out,’ Mr. Obama said coolly, cutting off any discussion. Mr. Reid seethed quietly for the rest of the meeting.”

Wow. And the nut graph: “Nearly six years into his term, with his popularity at the lowest of his presidency, Mr. Obama appears remarkably distant from his own party on Capitol Hill, with his long neglect of would-be allies catching up to him.

“In interviews, nearly two dozen Democratic lawmakers and senior congressional aides suggested that Mr. Obama’s approach has left him with few loyalists to effectively manage the issues erupting abroad and at home and could imperil his efforts to leave a legacy in his final stretch in office.”

Sounds like a dysfunctional marriage. And what is noteworthy is the number of Democrats quoted on the record as trying to diplomatically discuss the problem.

Claire McCaskill: “For him, eating his spinach is schmoozing with elected officials.”

Joe Manchin, asked to describe his relationship with Obama: “It’s fairly nonexistent. There’s not much of a relationship.” And: “Some Democrats say, they have just learned to accept the president’s solitary nature and move on.”

All of which means the failure to get Congress to do much of anything in the second term can’t just be blamed on obstructionist Republicans.

Times columnist Maureen Dowd, who’s already been down on Barry, uses the story to ratchet up her complaints:

“Why should the president neutralize himself? Why doesn’t he do something bold and thrilling? Get his hands dirty? Stop going to Beverly Hills to raise money and go to St. Louis to raise consciousness? Talk to someone besides Valerie Jarrett?

“The Constitution was premised on a system full of factions and polarization. If you’re a fastidious pol who deigns to heal and deal only in a holistic, romantic, unified utopia, the Oval Office is the wrong job for you.”

To be fair, there are benefits to having a president with an even temperament, one who doesn’t get mired in the muck of partisan politics. But why Obama doesn’t court Democratic pols who could help him, have them over for a movie or up to Camp David, remains a mystery. The office rests on the power of persuasion.

At Yahoo News, Matt Bai riffs on the complaints about Obama’s style:

“What we really need, I guess, is an executive in the mold of a Chris Christie or an Andrew Cuomo or a Rick Perry, all of whom are more extroverted and more brazen about wielding their power as governors than Obama is — and all of whom, not incidentally, are now fending off prosecutors and investigations while scrambling to keep their national ambitions afloat.

“And this illustrates an interesting paradox of modern politics: We love this idea of the ruthless and effective political operator, right up until the moment we're confronted by the reality.”

To those who say Obama should be more like Lyndon Johnson, Bai quotes LBJ biographer Robert Caro:

“Johnson's life is filled with incidents of cruelty — savagery, really — that go beyond any specific relationship to a noble cause. There are things Johnson does that you would just recoil at, no matter how used to ruthless politics you think you are.”

Okay, so Obama doesn’t have to threaten to break any arms, like LBJ did. But how about inviting allies to play a little golf?