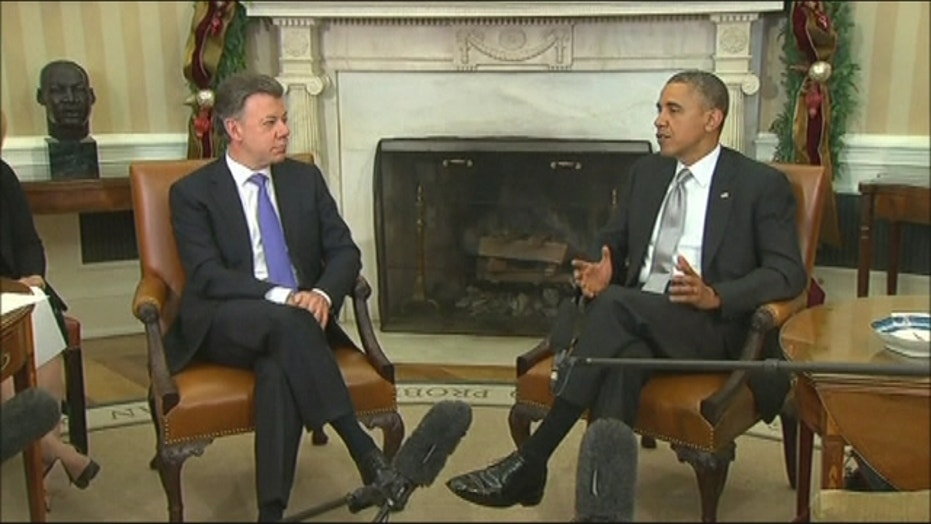 In a meeting at the White House, President Barack Obama praised Colombian President Juan Manuel Santos Tuesday for making gains on peace in the South American nation and on trade between the two countries.

Santos hailed relations between the two governments, noting that security and drug trafficking no longer dominate talks like in the past.

The two men, however, parted ways on one closely watched international clash: The upcoming World Cup in Brazil.

Both Colombia and the U.S. have qualified for the quadrennial soccer tournament and the two presidents said they would prefer that the two teams not meet in the early round. Seated next to Obama in the White House Oval Office, Santos offered some friendly needling, expressing hope that Colombia would eliminate the U.S. in a later stage.

"We'll have to make a wager on that," Obama replied, grinning.

The two leaders were holding talks focused on growing the economic relationship between their countries in the midst of peace talks between Santos' government and Colombia's leading rebel group, the Revolutionary Armed Forces of Colombia, or FARC.

"Precisely because of the success on the security front we also have been able to widen our discussion to a whole host of issues," Obama said, citing the potential for educational advances, regional energy projects and technological expansion that expose rural children to the world.

Santos said the support of the United States and the international community has been decisive in the success so far of peace negotiations with rebels.

"It is my hope that this is a conflict that will come to an end," he said. "We have been shedding blood for over 50 years.

Obama said a final resolution will not be easy. "There are many challenges ahead," he said. "But the fact that he has taken this step is the right one."

Based on a story by The Associated Press.