New York City Mayor Eric Adams on Wednesday called Texas Gov. Greg Abbott an "anti-American governor" -- as the liberal mayor continued to fume over the busing of illegal immigrants into his city.

It has provoked a furious response from the mayors of those cities, who have called for both help from the federal government and for the busing of migrants to stop. Adams on Tuesday said that he is considering sending a bus load of New Yorkers to Texas to campaign in the upcoming gubernatorial election.

"I already called all of my friends in Texas and told them how to cast their vote, and I am deeply contemplating taking a bus load of New Yorkers to go to Texas and do some good old-fashioned door knocking because, for the good of America, we have to get him out of office," Adams said in a press conference on Tuesday.

Both Abbott’s campaign, and Abbott himself shot back at Hizzoner.

"Because of high taxes, out of control crime, and poor leadership by the Mayor, people are volunteering to leave New York City without the Mayor asking," campaign spokesperson Mark Miner told Fox News Digital. "It looks like Mayor Adams has taken on the additional role of political director for [Democratic candidate] Beto O’ Rourke."

"I kind of feel like Clint Eastwood. Go ahead, make my day," Abbott responded on "The Faulkner Focus," saying such a move would only help his campaign for re-election.

Abbott said voters in Texas are "fed up" with the chaos at the border under the Biden administration.

"And that is exactly why we are sending these illegal immigrants to places like Washington, D.C. and New York City," he said.

Adams was asked on Wednesday about Abbott’s "make my day" response and took it a step further.

"Well, first of all, I know he thinks he's Clint Eastwood, but he's not," he said. "He is an anti-American governor that is really going against everything we stand for. And I am going to do everything feasible to make sure the people of Texas realize how harmful he is to us globally."

"He's a global embarrassment because this is not what we do as Americans, all of us," he said. "And I'm sure if he goes into his lineage, he came from somewhere and if his ancestors were treated the way he's treated these asylum seekers and migrants, then he would not be where he is right now." 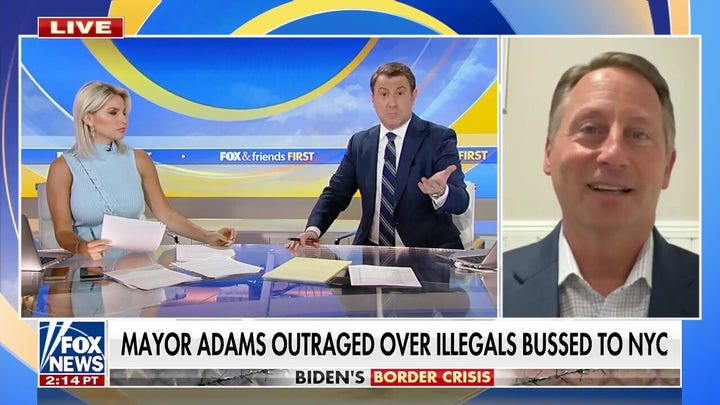 Abbott’s office has stressed that migrants get on the buses voluntarily and provided Fox News with a voluntary consent waiver form, distributed in multiple languages.

That form says that the migrant "agree[s] to be transported by the State of Texas or its designated agency officials to locations outside of Texas, such as Washington, D.C. or New York City, New York."

It also states that New York City "has been designated as a sanctuary city by its City Council, and is providing shelter and food to migrants who have entered the country."

Both Adams and D.C. Mayor Muriel Bowser have called for the federal government to step up in its assistance to their cities.

A White House official told Fox News Digital that the White House has "been in regular contact with Mayor Adams and his team, and are committed to working with them as we do effectively with other local leaders through FEMA funding and other support."

"As we have always said, there is a process in place for managing migration flows, and Republicans governors should stop meddling in that process and using desperate migrants as political tools," the official said.