Noem told "America’s Newsroom" on Tuesday that she believes the bill "bails out those states that shut down their economies" and "rewards them for making people stay in their homes and for taking away a business’ right to be open and take care of their customers and their employees."

"So it’s incredibly detrimental to our state because we made the right decisions. We trusted people," she said. "We have the lowest unemployment rate in the nation and are tied for it with Nebraska and we’re getting through this together."

"What this bill does is reward New York and Illinois and California for their bad actions and their overstep of our personal liberties and our freedoms," she  added.

House Democrats are on track to pass President Biden’s nearly $2 trillion coronavirus relief package by the end of the week as Congress races to provide a fresh round of aid to families and businesses still reeling from the pandemic.

The measure, which includes a third $1,400-stimulus check for Americans earning less than $75,000, gives $350 billion to state and local governments.

But deficit-weary Republicans have criticized the size and scope of the legislation, arguing the aid should be better targeted to those who need it the most and slamming Democrats for including certain provisions.

The nation's deficit totaled a record $3.1 trillion for the 2020 fiscal year, and the national debt is on track to hit $28 trillion. 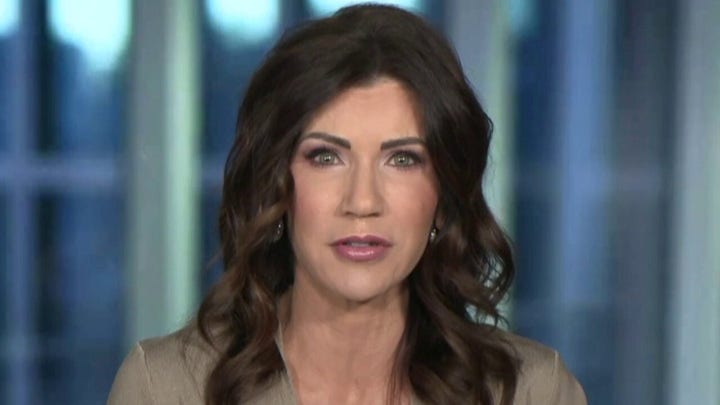 Noem acknowledged on Tuesday that she is not sure "how the bill will play out."

"What’s frustrating for me is that people attack us in South Dakota for taking the route and the path that we took," she said, noting that what’s not talked about is that her state is in "the top three of the nation vaccinating our people."

Noem stressed that South Dakota has been "very proactive at making sure that people have access to the vaccine" and that the state is "protecting our vulnerable population and people are happy."

"Congress needs to do the right thing," she said. "They need to stop doing bills like this."

She went on to stress that members of Congress "need to start focusing on what made America great and that was trusting people, protecting our freedoms and making responsible fiscal decisions."