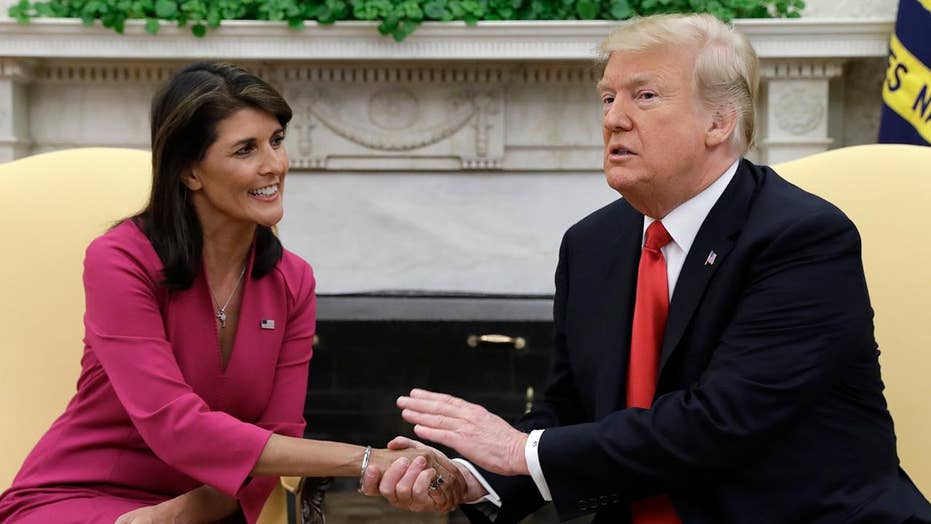 Trump praises Amb. Nikki Haley: We will miss you

Nikki Haley abruptly announced her resignation Tuesday as U.S. ambassador to the United Nations, catching staff and lawmakers by surprise and leaving Washington guessing about the next move for one of the administration's most prominent figures.

Speaking in the Oval Office alongside President Trump, who accepted the resignation, Haley said she would serve through the end of 2018. She preemptively sought to mute speculation she might run against her old boss, stressing that she will support Trump and will not campaign for the White House in 2020.

Haley called her time at the U.N. a "blessing," but offered no reason for leaving other than a belief that government officials must know "when it’s time to step aside."

Trump told reporters that Haley did "an incredible job" and is a "fantastic person." He said she had told him six months ago that she wanted to take a break "maybe at the end of the year."

"Hopefully you'll be coming back at some point, maybe in another capacity," he told her. "You can have your pick."

Haley called her time at Turtle Bay the "honor of a lifetime" and said there was "nothing set on where I am going to go." She also praised the work of Ivanka Trump and Jared Kushner, particularly Kushner's role in re-negotiating the North American Free Trade Agreement (NAFTA). She called Kushner a "hidden genius."

"Now the U.S. is respected. Countries may not like what we do, but they respect what we do," she said, citing a number of achievements of the Trump administration.

"The U.S. is strong again, it's strong in a way that should make all Americans very proud," she told reporters.

On why it's time to leave, Haley said she's a believer in term limits and believes it's good to rotate new government officials in from time to time. In her resignation letter, Haley also expressed that sentiment and again ruled out a 2020 run.

"I expect to continue to speak out from time to time on important public policy matters, but I will surely not be a candidate for any office in 2020," she wrote. "As a private citizen, I look forward to supporting your re-election as President, and supporting the policies that will continue to move our great country toward even greater heights."

Axios, which first reported the news, reported that Haley discussed her resignation last week when she visited Trump at the White House. The outlet reported that the news shocked a number of senior foreign policy officials in the administration. State Department sources told Fox News that Haley told her staff her intentions to resign just this morning. One Security Council diplomat told Fox News that the news "came as a surprise to me." 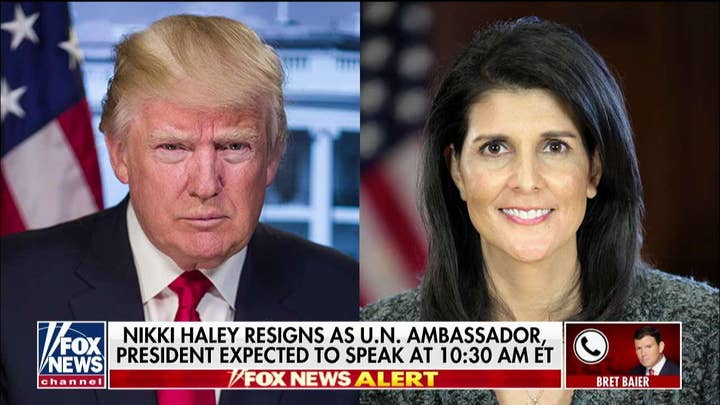 Haley had been a critic of Trump during the 2016 Republican primary campaign but emerged as a key figure in his administration as she pushed the administration’s policy goals on Iran, North Korea and other items of international cooperation. The former governor of South Carolina was confirmed as U.N. Ambassador four days after Trump was inaugurated in January 2017.

Haley was a fierce critic of U.N. mismanagement and bias against Israel and the U.S. She secured cuts to the U.S. contribution to the U.N. fund, and pulled the U.S. out of the U.N. Human Rights Council -- calling it a "cesspool of political bias." She also secured an arms embargo on South Sudan, a goal that had evaded the Obama administration.

A number of U.N. diplomats reacted with praise for the outgoing U.S. ambassador. Israeli Ambassador to the U.N. Danny Danon thanked Haley in a statement "for standing with the truth without fear."

"We will miss her. I worked with her two years and from the beginning it was a warm, personal relationship and Morocco will never forget her," Moroccan Ambassador Omar Hilale told Fox News outside the U.N.

HALEY PRESSURES ARAB STATES TO STEP UP ON PALESTINIAN AID; 'WE ARE NOT FOOLS'

Haley spearheaded the administration's push to increase U.N. sanctions on North Korea, a move that ultimately led to a de-escalation of tensions in the region and talks between Trump and North Korean leader Kim Jong Un. On Tuesday, Trump said that they "have solved a lot of problems" together and specifically mentioned North Korea, which he said is "moving along nicely."

The shock move comes just days after the opening of the U.N. General Assembly session, where Trump spoke in front of the GA and also chaired a Security Council meeting on Iran and non-proliferation of weapons of mass destruction.