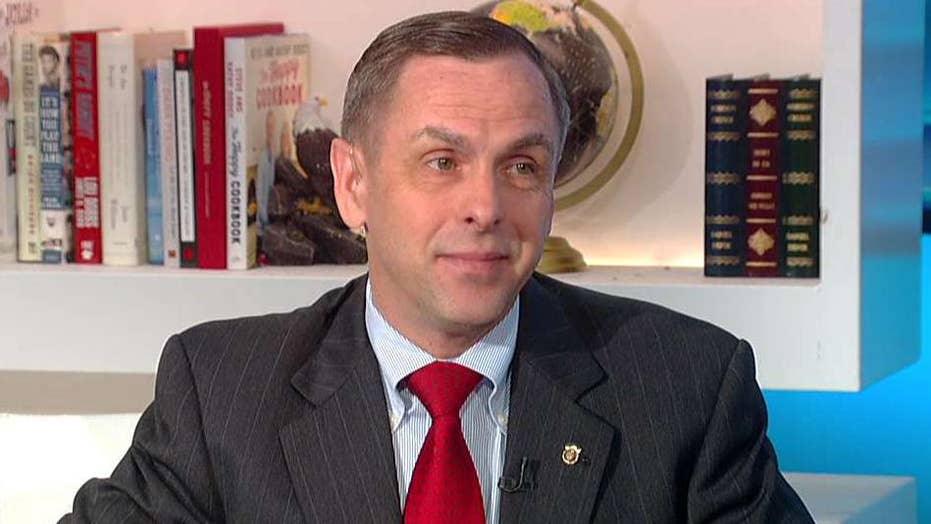 New York assemblyman Robert Smullen weighs in on the decision to halt tuition expansion for military families in favor of illegal immigrants.

A Republican New York assemblyman spoke out on “Fox and Friends” after state Democrats blocked a bill expanding college tuition aid to Gold Star families earlier this week, despite approving such aid for illegal immigrants just a week ago.

“This is one of those things of misplaced priorities that needs to be simply fixed as quickly as possible,” said Robert Smullen, who’s also a retired Marine, on Saturday morning.

“This is one of those things of misplaced priorities that needs to be simply fixed as quickly as possible.”

“This was blocked in a committee vote. It needs to come out into the assembly onto the floor so it can be debated and then actually, I think the governor will sign it, he has indicated that he would. It's really time for action. It's a time for us to take care of the families of our service members who are fallen.”

The Assembly’s Higher Education Committee voted 15 to 11 on Tuesday to shelve the bill, meaning it won’t be going to the floor for debate and a vote.

The move comes just a week after the state approved $27 million for a program allowing illegal immigrants to qualify for state aid for higher education.

“This is a bipartisan thing. So, it is a process of procedural foul that needs to be corrected as quickly as possible. That's really where leadership comes in. If we lead properly, we would then be able to take care,” Smullen said, noting that the bill proposing aid to Gold Star families has been blocked for years.

“We have been working very hard to make sure this is an inclusive program. So it includes those who are killed in combat but also those that are killed in the line of duty. And it makes it an equitable thing so those people that go forward that do our duty, they do their oath to the Constitution to support and defend, they know that we got their backs covered and that their families will be taken care of,” he added.

New York Democrats defended the blocking of the bill, saying the aid to Gold Star families was not within the state's budget and noted that there’s a similar program that provides $2.7 million to 145 students who are dependents of veterans who served in combat zones.

Mike Whyland, a spokesman for Assembly Democrats, said the Republican-led bill “would have expanded the eligibility beyond the scope and should be considered within the context of the budget.”

But Smullen reiterates that supporting Gold Star families “should absolutely be our first priority” and points to the recent death of Christopher Slutman, Marine reservist and a member of New York City Fire Department, who was killed on Monday by a roadside bomb near a U.S. base in Afghanistan.

“When you think about it, we as a society, as a civilization, and New York particularly, ought to be a leader in this nation to take care of those who need it most.  And, you know, we just had a marine reservist killed in Afghanistan. A member of FDNY, very tragic."

“When you think about it, we as a society, as a civilization, and New York particularly, ought to be a leader in this nation to take care of those who need it most.  And, you know, we just had a marine reservist killed in Afghanistan. A member of FDNY, very tragic,” Smullen said.

“We need to be thinking most about their families in times like this. Our condolences to them. Also to be able to say we have got your back. We have got this covered. So, you, as a service member, can always do the right thing knowing that your family is going to be taken care of.”

The Republican legislator then urged people to call up their representatives and demand them to bring the measure to a vote, pass it, and get the governor to sign it.