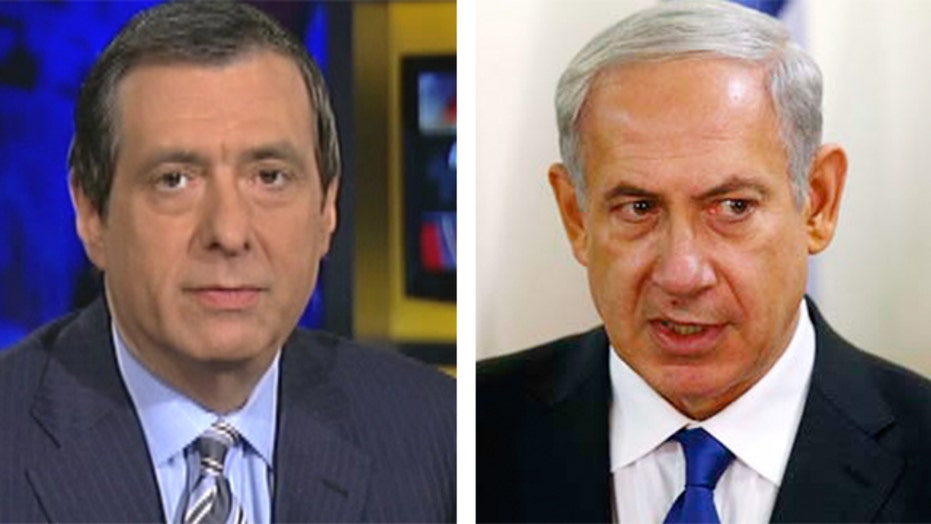 Kurtz: What's behind the Bibi brawl

You can’t argue with Benjamin Netanyahu on this point: “Never has so much been written about a speech that hasn’t been given.”

That line, delivered by the Israeli prime minister in an AIPAC speech yesterday, was a good-natured reference to the avalanche of media coverage surrounding his address to Congress on Tuesday.

I viewed this initially as the classic partisan media frenzy. Most conservatives rallied behind Bibi, and most liberals rallied behind President Obama in this most undiplomatic of disputes.

It’s just so predictable: John Boehner invites Netanyahu to give a speech without bothering to tell the Obama White House: the right cheers and the left boos.

But flip the script: If Nancy Pelosi had invited Ariel Sharon without telling George W. Bush, conservative commentators would have gone haywire criticizing this slap against the president, while liberal pundits would have focused on how important it was for Congress to hear from Sharon.

My initial assumption was that the impasse would be papered over: Either Obama would meet with Netanyahu despite the protocol of not granting an audience to a prime minister running for reelection, or Bibi would back out of the speech, or it would be moved to another location, or something.

Instead, both sides hit the escalation button. Susan Rice called Netanyahu’s visit “destructive.” Leaked intelligence documents showed Netanyahu’s declaration in 2012 that Iran was a year away from building a nuclear bomb was contradicted by his own secret service. A relationship that had been testy became openly poisonous, not withstanding Netanyahu’s comment yesterday that he means no disrespect to Obama.

That’s why the media coverage, voluminous as it is, is largely warranted. What began as a finger-in-the-eye stunt has mushroomed into a genuine crisis between the United States and its most important Mideast ally.

“The perverse genius of Benjamin Netanyahu and his aides (and their Republican handmaidens) is that they have managed to turn a moment in which President Obama should have been busy defending his pursuit of a nuclear agreement with a dangerous adversary into a stress test of the U.S.-Israel relationship,” says The Atlantic’s Jeffrey Goldberg, one of the leading journalists on the Middle East.

There are no heroes here, and National Journal’s Ron Fournier says a pox on all their houses:

“The ugly precedents set in the run-up to Tuesday's address could make it harder for U.S. presidents to execute foreign policy free of domestic politics for years to come—a prospect that should worry Republicans as much as Democrats.

And there are Israeli politics at play as well, as Politico notes:

“If you were coming from Mars to Israel and you would read the newspapers, you would think there is a war between Israel and the United States, or at least between Netanyahu and the White House,” said Eytan Gilboa, a professor who specializes in U.S.-Israel relations at Tel Aviv’s Bar-Ilan University. “The more the White House criticizes Netanyahu, the more votes he gets from the right, and to a certain extent, from the center.”


The backdrop, of course, is that John Kerry seems to be moving aggressively toward striking a nuclear deal with Iran that critics say will concede too much—and Netanyahu regards as an existential threat to his country.

Nobody who follows the issue needs a Bibi speech to explain the stakes or the dangers inherent in any deal with Teheran. But politics is often about theater, and all the anxiety and emotion that revolve around Israel’s struggle to survive is now at center stage.