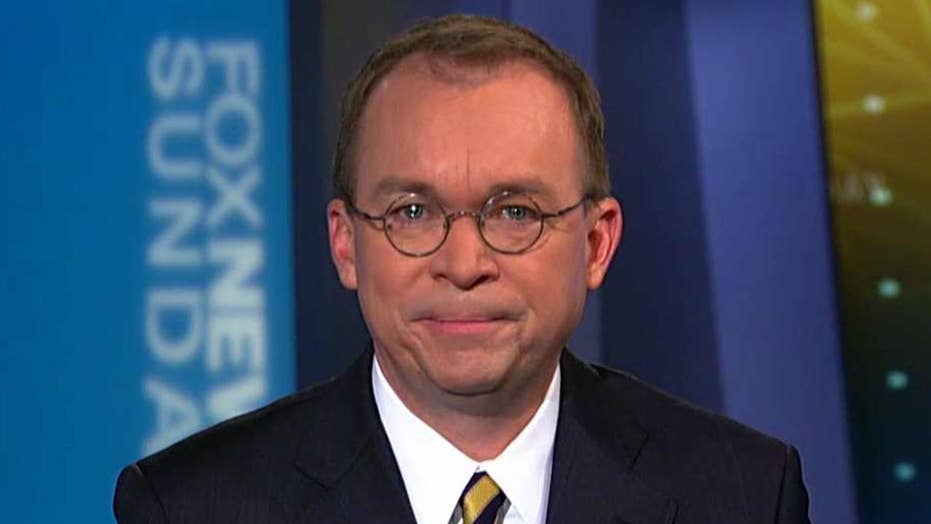 Mick Mulvaney on impact of the shutdown, efforts to reopen

Director of the Office of Management and Budget weighs in on 'Fox News Sunday.'

White House Budget Director Mick Mulvaney tried Sunday to calm Americans’ fears about the government shutdown, vowing those going to work Monday won’t see a “dramatic difference” because President Trump isn’t trying to “weaponize” the situation like the Obama administration did in 2013.

“The effects won’t actually be as visible as they were as in 2013,” Mulvaney told “Fox News Sunday.” “Keep in mind that in 2013, the only way I can describe it, was the Obama administration chose to weaponize the shutdown. They wanted it to be showy. They went out of their way to hurt more people and to be more visible.”

Mulvaney argued the former administration put barricades in front of the WWII memorial, on the National Mall, arguably to keep out military veterans and to try to put the blame on Republicans.

The most recent shutdown started overnight Friday, after the GOP-controlled Senate failed to pass a temporary spending bill to give the government the money needed to stay fully operational.

The GOP-controlled House passed its spending bill because it had enough Republican members and didn’t need Democrats' support.

However, the bill stalled in the Senate because Republicans needed votes from at least nine Democrats to advance the bill.

Republicans blame Democrats for insisting that any spending bill to avoid a shutdown include protection from deportation for illegal immigrants brought to the United States as children.

President Trump, who is ending the Obama-era deportation protection in early March, has vowed to find a permanent solution.

But he says any comprehensive immigration-reform plan must include funding for his U.S.-Mexico border wall and changes to the country’s so-called “chain” and “diversity-based” immigration programs.

Mulvaney also said Sunday that Trump told his top staffers Friday to try hard to “keep as many as folks at work and as many of these (federal) agencies open as we can” during the shutdown.

Still, Mulvaney acknowledged that the shutdown will have an impact on the country, including nearly 1 million federal workers being furloughed at the start of the workweek.

“Those notices went out yesterday,”’ he said.

Mulvaney also said any temporary spending bill would have to be at least three-weeks long to negotiate a change to the Obama-era Deferred Action for Childhood Arrivals program that protected young illegal immigrants from deportation.

Still, he expressed some optimism about congressional Democrats and Republicans reaching a deal soon.

“I think there’s a chance it gets solved before Monday,” Mulvaney said. “I really do believe that at heart here there was an interest by some folks in the Democratic Party to deny the president sort of the victory lap of the anniversary of his inauguration, the chance to talk about the success with the tax bill … . And I think if they get over that there’s a chance this thing gets done before 9 o’clock on Monday morning and folks will come to work.”