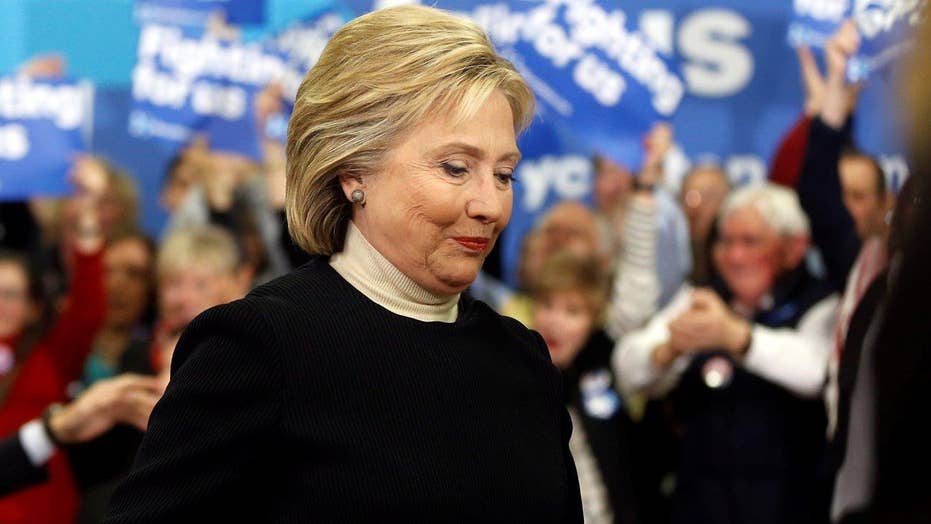 What are Hillary's plans moving on to South Carolina?

Despite the campaign’s attempt to downplay the defeat as “long anticipated,” the astonishing turnout for Sanders now raises serious questions about the former secretary of state’s appeal going into the next round of contests – not just South Carolina, but Nevada and the many delegate-heavy states that vote in March.

Republicans were all too eager to point out that the Democrats’ longtime front-runner has a problem on her hands.

“The word momentum is very important, and certainly, there's not a lot of momentum there,” Donald Trump, the Republican winner Tuesday night, told Fox News.

Whether Clinton is facing a 2008-level crisis remains to be seen. Democratic strategist Joe Trippi said the “test” for Sanders will be whether he can expand his support to black and Latino voters, or if New Hampshire was his “high water mark.”

The Clinton campaign minces no words in suggesting that once states with a bigger minority population vote, Clinton will recover.

“The nomination will very likely be won in March, not February, and we believe that Hillary Clinton is well positioned to build a strong – potentially insurmountable – delegate lead next month,” campaign manager Robby Mook said in a memo Tuesday night, noting the electorates in the first two contests are largely rural/suburban and white.

But Clinton, who won New Hampshire in 2008, still lost across virtually every voting group Tuesday including women, exit polls show.

The exit polling showed Sanders won among women, 55-44 percent; among moderates, 58-39 percent; and among voters under 50 by a huge margin.

Sanders won across voters of every education level and every income level – except for those making over $200,000, among whom Clinton had the edge.

The major demo won by Clinton Tuesday night was the over-65 bloc, which backed her 55-44 percent.

Clinton still leads heavily in the polls in critical states like South Carolina and Florida, and it’s unclear whether Sanders will be able to transfer his momentum from the Northeast – his home turf – to the South.

While non-Hispanic white residents make up more than 91 percent of the New Hampshire population, Census figures show they make up just 62 percent of the overall U.S. population – meaning minority voters will be a bigger factor going forward.

In New Hampshire, though, exit polls show Clinton only won the state’s small non-white demographic by a single percentage point.

The exit polling data in the Granite State still holds troubling signs for the campaign. She lost big among voters looking for a candidate who is honest and trustworthy – though won among voters whose priority in a candidate is experience. It’s a factor Clinton is likely to hit hard in the days ahead, as she squares her foreign policy record at the State Department against Sanders’ – whose main foreign policy resume item was his vote against the Iraq war, which he mentioned again at his victory rally Tuesday night.

“Tonight we serve notice to the political and economic establishment of this country,” Sanders declared.

The Clinton campaign had denied such reports before the New Hampshire vote.

But while Clinton also told MSNBC on Monday she has “no idea what they’re talking about or who they are talking to” regarding the Politico piece, she did acknowledge her campaign is “going to take stock." Reports indicate the campaign may be looking more to add staff -- rather than fire people.

The Republicans, meanwhile, charge into South Carolina and Nevada with the race remaining tight and unpredictable. Trump scored a decisive win over the rest of the Republican field, recovering after his second-place finish last week in Iowa to Texas Sen. Ted Cruz.

But Ohio Gov. John Kasich, among the worst performers in Iowa, scored second in New Hampshire. And the race for third was tight, potentially giving every candidate in the top five a reason to keep running.

All three are indeed vowing to keep charging ahead. Bush told CBS News on Wednesday that the field will “whittle down” and he is a “patient person.”

Cruz potentially heads to more friendly territory in South Carolina, looking to build on his Iowa win which was aided by the strength of the evangelical vote. And Rubio, who stumbled in a rocky debate performance Saturday, vowed to supporters Tuesday that he’ll keep fighting and a performance like that “will never happen again.”