Nicholas Sandmann: No one has been a victim of unfair media coverage more than President Trump

Senate Majority Leader Mitch McConnell’s reelection campaign announced Friday that it has hired Nicholas Sandmann, the Kentucky teen who sued two major media outlets for defamation over a viral encounter he had with a Native American activist.

“We’re excited to have Nicholas on Team Mitch,” Team Mitch Campaign Manager Kevin Golden said in a statement. “Along with our already strong team, his efforts to bring people together all across Kentucky will be critical to Senator McConnell’s victory this November.”

Sandmann began working as a paid employee earlier this month as a grassroots director, the campaign said. In that role, he will assist with coalitions and field operations while remaining as a student at Transylvania University.

In 2019, a video of Sandmann -- wearing a red Make America Great Again Hat -- went viral, showing the teenager standing directly in front of Native American elder Nathan Phillips on the steps of the Lincoln Memorial. Sandmann had been on a trip from his Kentucky school to Washington, D.C., for the March for Life on Jan. 18, 2019. 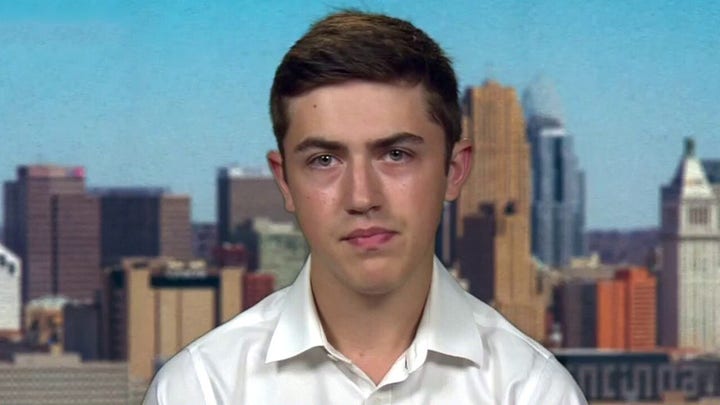 When the video was initially released, many perceived Sandmann to have been mocking Phillips by smirking inches from his face, while the Omaha tribe leader sang and played a drum. But full footage showed a more complicated image where the Covington students were not the instigators: Phillips had actually walked up to the Covington school kids after another group began taunting the teenagers.

Sandmann later sued the Washington Post and CNN for defamation. The cases were settled for undisclosed amounts.

This week he spoke at the Republican National Convention (RNC), where he talked about what he described as the attempts to “cancel” him.

"I wouldn’t be canceled. I fought back hard to expose the media for what they did to me and won a personal victory. While much more must be done, I look forward to the day that the media returns to providing balanced, responsible and accountable news coverage," he said. "I know President Trump hopes for that too."