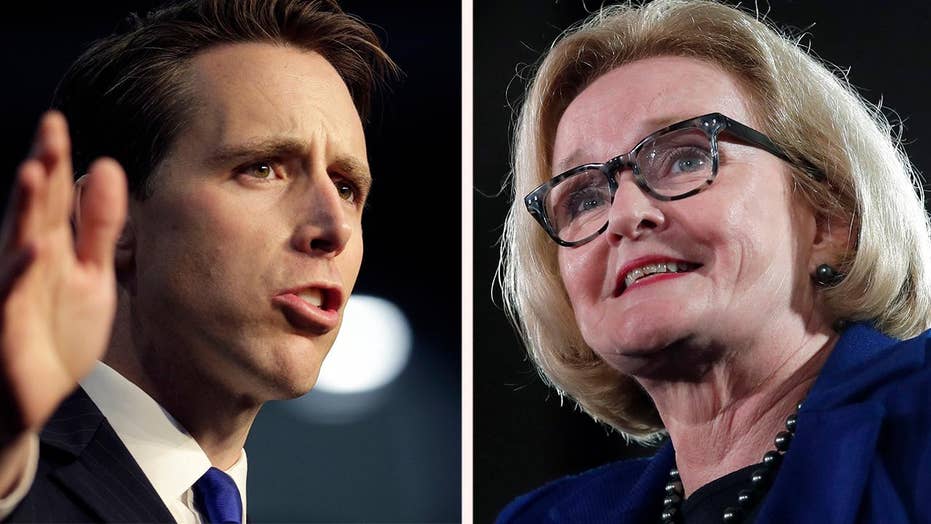 Why is the race so competitive in Missouri?

In one of the most contested Senate races of the midterm elections, incumbent Missouri Sen. Claire McCaskill was ousted Tuesday by Republican candidate Josh Hawley.

The race between McCaskill and Hawley, the state attorney general, had been neck-and-neck, with polls showing a statistical toss-up since last month. But in the end, Hawley emerged victorious.

The results came in nearly three hours after polls closed in the Show Me State. Large voter turnout required some districts to stay open to ensure everyone was able to cast their vote, according to officials with the Missouri secretary of state's office.

McCaskill was among 10 Democratic Senate incumbents up for re-election in states that President Trump won. Republicans saw Missouri as a prime opportunity to flip a seat and build on their slim majority in the Senate. The incumbent seemingly tried to hedge her bets during the campaign and presented a more centrist message on the campaign stump in the hopes that it would resonate with independents and moderate Republican voters she desperately needed to beat Republican challenger Hawley.

During a late October debate, McCaskill praised Republican icon Ronald Reagan for working to unite the country when he was president in the 1980s.

She also called out some of her fellow party members in a recent interview with Fox News.

Speaking exclusively to Fox News anchor Bret Baier last Monday, McCaskill dropped the names of two high-profile colleagues, Elizabeth Warren, and Bernie Sanders, when asked to identify the "crazy Democrats" from whom her campaign has distanced itself in recent days. The incumbent said she wouldn't call the two "crazy," but noted they had disagreements with each other.

"The crazy Democrats are people who walk in restaurants and scream in elected officials' faces," McCaskill said on "Special Report." In recent weeks, progressive activists have hounded Republican Sens. Ted Cruz and Mitch McConnell as they ate dinner, as well as Homeland Security Secretary Kirstjen Nielsen.

When Baier asked if McCaskill had any "crazy" colleagues in the Senate, she referenced Massachusetts Sen. Elizabeth Warren, considered a potential 2020 presidential contender.

Well, I would say this," McCaskill replied. "I would not call my colleagues crazy, but Elizabeth Warren sure went after me when I advocated tooling back some of the regulations for small banks and credit unions."

Asked in the same Fox News interview about the caravan of migrants making its way through Mexico, McCaskill said:

"Stop it at the border. I think the president has to use every tool he has at his disposal and I'll 100 percent back him up on that."

McCaskill has served in the Senate by navigating the steadfastly red state of Missouri for nearly two decades with a more moderate approach. While she mostly stuck within her party’s line this year -- calling for gun-control measures and voting against the GOP’s plan for tax cuts – she has spent part of her campaign trying to court back Trump voters.

She has highlighted her record of working with Republicans and even criticized Hillary Clinton after the 2016 Democratic presidential nominee said she won in states that were “dynamic” and “moving forward” -- perhaps implying that states where she lost, like Missouri, were not.

“For those of us that are in states that Trump won, we would really appreciate if she would be more careful and show respect to every American voter and not just the ones who voted for her,” McCaskill said in a March interview.

Still, Hawley frequently attacked McCaskill as too liberal for a red state like Missouri throughout the campaign.

"She votes with (Sen.) Chuck Schumer almost 90 percent of the time, she voted against Justice (Brett) Kavanaugh, against Justice (Neil) Gorsuch, against middle-class tax cuts, against border security," Hawley said Saturday at a Columbia campaign stop. "She's against standing up to China and trade cheaters. I mean any issue that's important to Missourians, she's with her party down the line."

Hawley also largely supported Trump throughout the race, although he was careful not to adopt his rhetoric.

Trump threw his support behind Hawley as well. On Thursday, he implored voters to install the Republican candidate because he would fully back his agenda in Washington. He added that Hawley “will be a star.”

Trump also said at the Columbia rally that McCaskill had been "saying such nice things about me. But you know what? She'll never vote with me. That's the problem."

Fox News' Bret Baier, Dan Gallo, Gregg Re and The Associated Press contributed to this report.