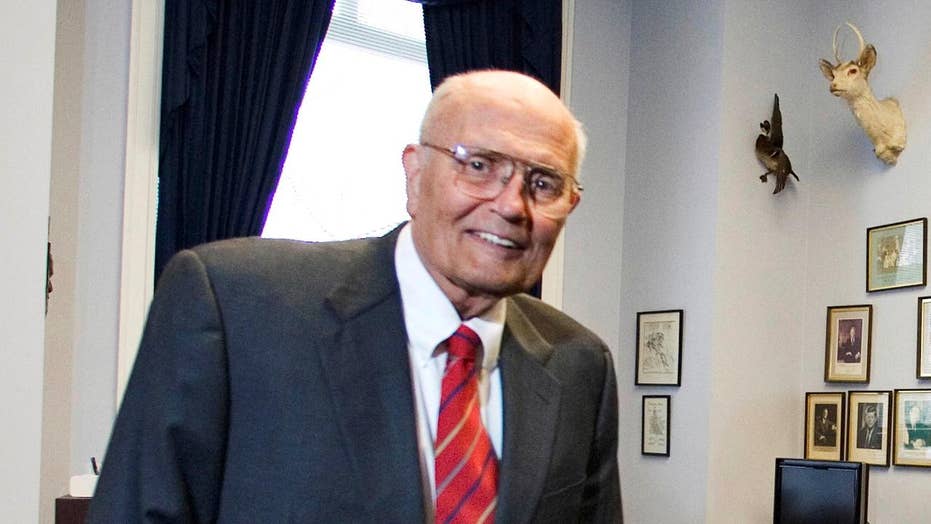 The hearse carrying the body of former Congressman John Dingell made a stop outside Capitol Hill on Monday in an emotional farewell for the longest-serving member in the history of Congress.

As the motorcade with his body stopped, Dingell's wife, Rep. Debbie Dingell, D-Mich., greeted and hugged a number of lawmakers standing on the Capitol steps in the rain.

The motorcade came after Dingell's body was flown to Washington from a funeral service in his home state of Michigan, where former Vice President Joe Biden spoke, saying the late lawmaker "knew public service wasn't a title you wear, but a shift you work."

About 800 people attended the service at Church of the Divine Child in Dearborn, the city where Dingell served and lived, including Michigan Sen. Debbie Stabenow. Bad weather prevented some from attending: A military plane carrying members of Congress was turned back — leading to an impromptu service at 30,000 feet.

Missouri Rep. Billy Long tweeted that the service aboard the plane was led by Rep. John Lewis of Georgia and Rep. Fred Upton of Michigan, who both had been scheduled to speak during the service, and House Speaker Nancy Pelosi.

A second funeral will be held Thursday in Washington, D.C.

The former congressman is survived by his wife, Debbie, who currently holds his House seat and four children. A cause of death was not immediately known.

“It is with a heavy heart that we announce the passing of John David Dingell, Jr., former Michigan Congressman and longest-serving member of the United States Congress," the congresswoman said in a statement following Dingell's death.

"Congressman Dingell died peacefully today at his home in Dearborn, surrounded by his wife Deborah. He was a lion of the United States Congress and a loving son, father, husband, grandfather, and friend. He will be remembered for his decades of public service to the people of Southeast Michigan, his razor sharp wit, and a lifetime of dedication to improving the lives of all who walk this earth.” 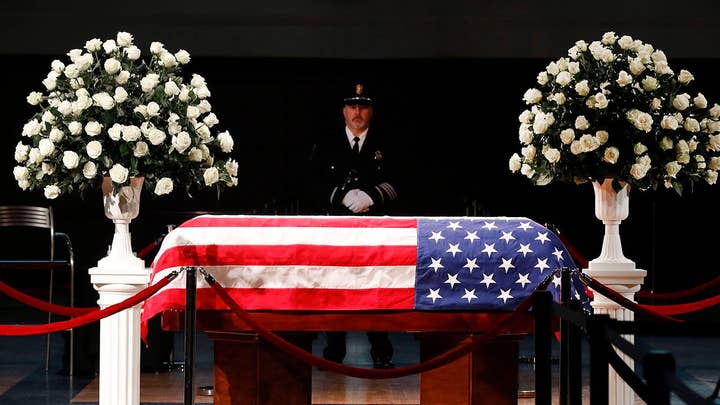 The Michigan Democrat was considered an authority on Congressional procedures, akin to the legendary Sen. Robert Byrd, D-WV. Dingell was best known for his legislative skills, deep reverence for history and stinging wit.

Nicknamed “The Truck” during his longtime tenure as chair of the House Energy and Commerce Committee, the congressman from Detroit fueled the passage of many landmark measures, including health care reform, energy regulations and telecommunications expansion.

By the time Dingell hit the record for the longest tenure in the House in February 2009, he was the Democrats’ go-to colleague for underlining a moment’s historical significance. Dingell’s presence at a press conference or in the chamber for a speech would immediately give an event a more serious tone. 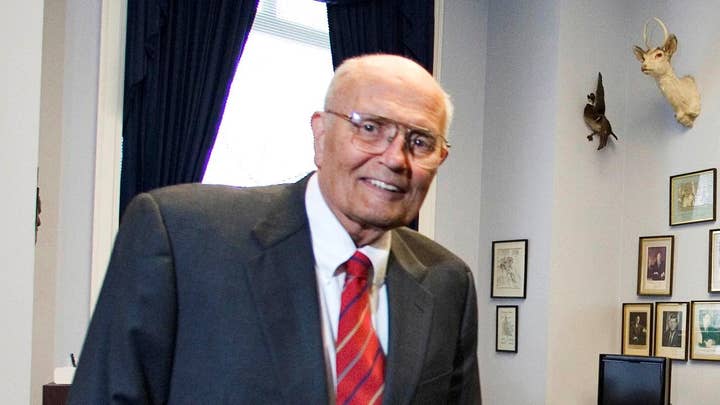 “He will be remembered as one of the most influential members of Congress not to have served as president,” said former Rep. Joe Barton, R-Texas, who served on the Energy and Commerce Committee with Dingell for two decades.