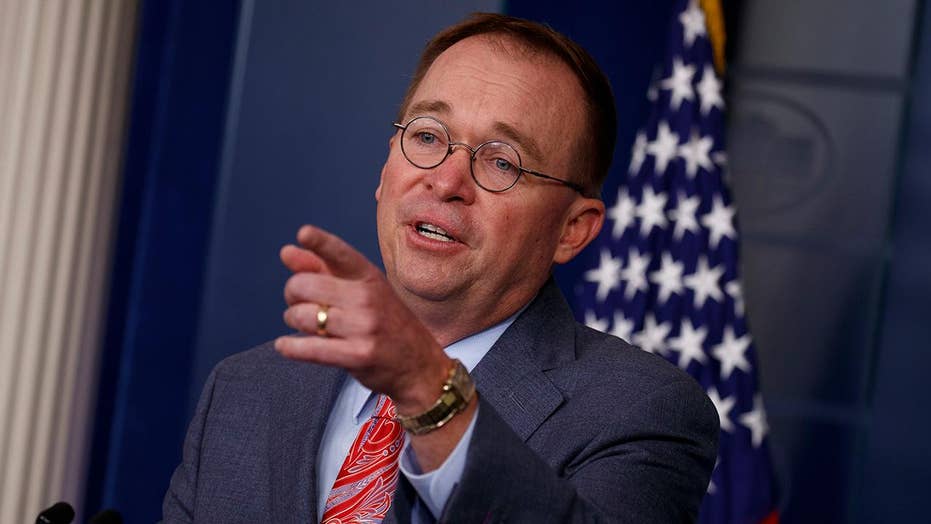 The acting White House chief of staff drew numerous critical comments Friday after being photographed at a Florida airport while wearing an American-flag-themed shirt and U.S. Space Force cap.

Mulvaney had just returned to the U.S. after accompanying President Trump on a top-secret visit to Afghanistan to spend Thanksgiving Day with American troops.

The Twitterati didn’t seem to care whether Mulvaney was inspired by the trip to express some patriotic spirit. They just let him have it.

“This is what disrespectful white trash Americans look like,” one Twitter critic wrote. “He thinks that this offensive shirt ‘owns the Libs’. It doesn’t.”

“This is what disrespectful white trash Americans look like. He thinks that this offensive shirt ‘owns the Libs’. It doesn’t.”

“Mulvaney’s shirt direct from the Walmart clearance rack,” another wrote.

“Trump made Mulvaney wear that sniper-target shirt the whole time they were in Afghanistan,” a third critic wrote.

The Spicer comments were triggered by his recent stint as a contestant on TV’s “Dancing with the Stars,” which involved wearing various costumes for different dance routines.

Perhaps drawing the most scorn was a bright neon rumba shirt.

“Anytime that image of Spicer in a lime green rumba shirt pops up I question if this isn’t purgatory,” another wrote.

“Anytime that image of Spicer in a lime green rumba shirt pops up I question if this isn’t purgatory.”

After wearing it, Spicer placed the shirt up for auction to raise money for the “Yellow Ribbon” fund, which assists the caregivers of wounded service members.

Jordan, a member of the House Intelligence Committee, which recently conducted impeachment hearings, is known for opting against wearing a jacket while performing his congressional duties. Earlier this month, The Washington Post let Jordan know it disapproved.

“For dignity’s sake, Jim Jordan, put on a jacket,” the Nov. 13 piece was titled. It later described Jordan’s fashion choice as “his power move” and his “sartorial chest thump.”

For his part, Jordan claims that shedding his jacket simply helps him do his job better.

“I can’t really get fired up and get into it if you’ve got some jacket slowing you down,” he told the Post.

Former President Barack Obama's choice of a tan suit did not go over well in Washington in 2014.

Fashion comments have also run in the opposite political direction: For example, former President Barack Obama was once taken to task over a tan-colored suit, and former Secretary of State Hillary Clinton has been the butt of many jokes about her pantsuits.