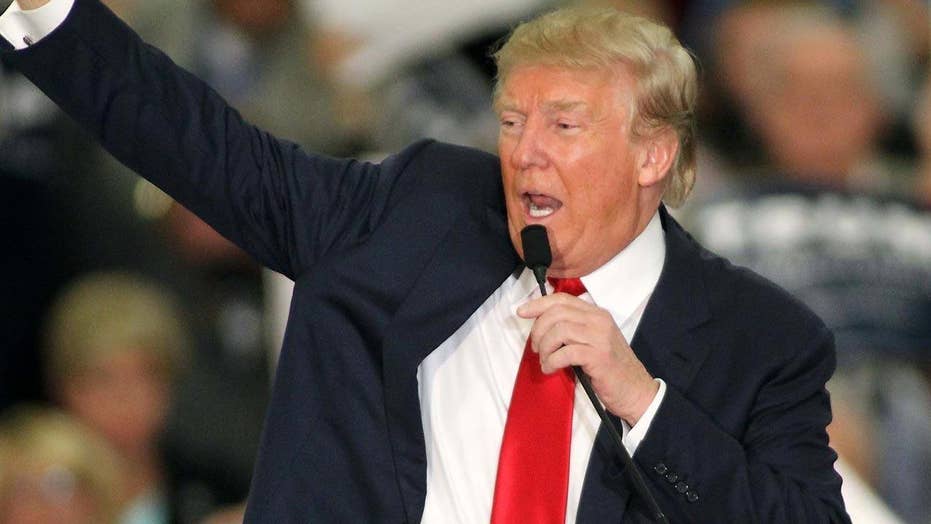 2016 Republican frontrunner still holds lead in polls as primaries near

Donald Trump has made some controversial campaign promises lately – including vows to monitor certain mosques, track Syrian refugees and bring back waterboarding – but the debate is still raging over perhaps his biggest-scale proposal: mass deportation of the country’s illegal immigrants.

The plan remains short on specifics, yet the current state of the backlogged immigration enforcement system demonstrates just how difficult it could be. As it stands, deporting a relatively tiny fraction of the total illegal immigrant population has clogged U.S. immigration courts.

According to TRAC (Transactional Records Access Clearinghouse), there are 459,219 cases pending, with most of them in California, Texas and New York. The vast majority are immigrants who either overstayed their permission to be here, or came into the country illegally. A smaller number involve criminal, terrorism or national security charges -- 25,561 as of September.

“To say you could just go and pick up 11 million or 12 million individuals and in just a couple of years deport them is just illogical, it’s just not possible,” said Maurice Goldman, an immigration lawyer in Tucson, Ariz., which according to TRAC has over 1,000 pending cases in its immigration court. TRAC is a project by Syracuse University that compiles up-to-date federal law enforcement records.

Politically speaking, Trump’s proposal continues to get mixed support, at a time when candidates and voters are focused largely on security issues in the wake of the Paris attacks.

In a recent Fox News poll, 52 percent said they favor Trump’s idea of deporting illegal immigrants, while 40 percent opposed it. But when specifically asked how they felt about “identifying and deporting millions of immigrants who are living in the U.S. illegally,” just 41 percent called it a “smart idea” that should be “seriously considered.” Thirty percent called it “silly” and “impossible,” while 24 percent said the idea is “wrong and shouldn’t be done even if it were possible.”

Trump may have mastered the art of the deal – but on the matter of mass deportation, the adage that politics is the art of the possible can’t be overlooked.

Today, the average wait time for a case in the immigration court -- which can end in deportation -- is 643 days. In 2008, it was 438 days. Goldman, describing one of his own clients, a man who came to the U.S. illegally in 1992 and was brought before the court in 2010, said wait times can be much longer. It was five years before his client’s case was “administratively closed,” meaning he won’t be deported this time but his charge is still “pending.” He can be put back before a judge at any time.

Trump, though, has been resolute about not only building a U.S.-Mexico wall but the deportation plan. During the Nov. 10 presidential primary debate, Trump advocated mass deportations like those pursued by President Dwight Eisenhower, otherwise known as “Operation Wetback,” in 1954.

According to historians, hundreds of thousands of people were removed under that operation, including Mexican-American citizens, who were forcibly rounded up and sent over the border to Mexico. The months-long federal operation has been described as inhumane and generally ineffective in stopping the number of Mexicans coming over the border.

Still, Trump defends his plan, recently telling Fox News he would do it humanely.

"I've heard it both ways. I've heard good reports, I've heard bad reports," Trump told "The O’Reilly Factor" earlier this month about the mass deportations under Eisenhower. "We would do it in a very humane way."

"If we do this job right, there shouldn't be a big court situation. Nobody knows legal situations better than Trump," he said. "They have to go back."

But critics say that while Trump could tweak federal regulations to streamline the process, he would have to change the law to pursue a strategy to avoid the immigration courts entirely. Currently, the government can fast-track deportations for violent criminals, but most immigrants, illegal and legal, have a constitutional right to due process as upheld by the U.S. Supreme Court.

There’s where the trouble lies in mass deportation. “The immigration courts are so underfunded, and that is why there is such a terrible backlog,” said Wendy Feliz, spokeswoman for the American Immigration Council. “[Judge positions] go unfilled, and even if they were filled, they still wouldn’t be sufficient.”

Doug Holtz-Eakin, president of the American Action Forum, a fiscally conservative policy group that assessed the cost of mass deportation in a study earlier this year, told FoxNews.com that sending 11 million people home would “harm the economy in ways it would normally not be harmed.”

His group estimates it would cost upwards of $620 billion to apprehend, detain and deport every illegal immigrant. “We would need more courts, more detention facilities, more police -- it would change the climate of America.”

“I am 100 percent sympathetic with those who do not like illegal immigration,” he said. “But what strategy you have for dealing with illegal immigrants is important. I’m not a fan of this one.”