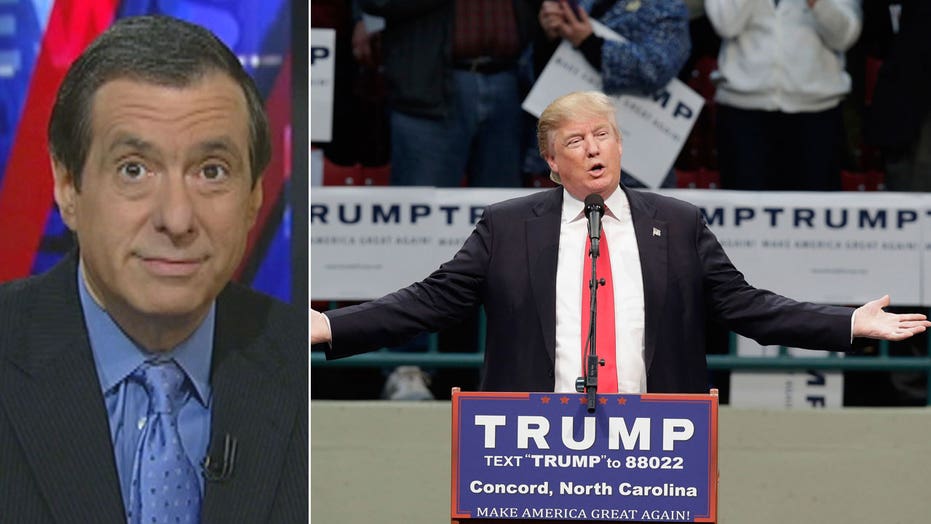 For all the talk of the Republican establishment trying to stop Donald Trump, it's the media establishment that is cranking up the volume to deafening levels.

What’s remarkable about this sustained assault is that it comes with equal force from the right and the left, united in their passion to stop the man who is winning the most Republican primary votes.

Presidential campaigns are rough, and opinion journalists often pound away at the candidates they dislike. These politicians get attacked on their record, background, temperament and for just about anything untoward they’ve done since grade school.

The tone of the media attacks over the last two weeks is apocalyptic, as if each commentator is undertaking a solemn mission to save the planet from an awful fate. Stop, they seem to be shouting, stop before it is too late!

Now they’re all entitled to speak out, based on their conscience. But the cumulative effect, combined with celebrities coming out of the woodwork to denounce Trump, carries a whiff of desperation.

What’s more, Trump has shown an uncanny ability to thrive on bad press, calling out journalists and casting himself as a crusader against media bias. The news business is a very popular target these days.

For liberal commentators who routinely strafe Republicans, Trump is a natural target. In the past, some have acted more bemused than appalled by The Donald, viewing him as destined to lose badly if he won the nomination. Now they’re not so sure he couldn’t drive Hillary Clinton crazy and put some traditionally Democratic states in play, so the gloves are off.

For commentators on the right, Trump is viewed as a threat to conservatism and as engaging in a hostile hijacking of the Republican Party. Some are convinced that he would either lose in a landslide or ruin the GOP’s brand.

I’m offering excerpts here to highlight how these pundits are depicting Trump as not just a bad candidate but a threat to civilization.

Slate Editor-in-Chief Jacob Weisberg says that Trump, “as a reality TV star and cyberbully on his third wife…is himself a good illustration of the breakdown of any moral order possibly remaining.” He says “Trump represents what autocratic attitudes look like in a modern American context. He is unfriendly toward the free market, the free press, and the free exercise of religion while paying lip service to these values. He is xenophobic, conspiratorial in his worldview, admiring of violence and torture, contemptuous of the weak, and unwilling to tolerate criticism or peaceful dissent—but all in the name of correcting excesses of tolerance.”

The Washington Post’s Ruth Marcus says that since she last wrote about him, “Trump has proved himself to be even less knowledgeable and even more unhinged. His election would constitute a grave threat to American values and, potentially, American democracy…

“Trump is Nixon with all of the megalomaniacal willingness to abuse power and none of the crafty realpolitik.”

David Remnick, editor of the New Yorker, poses this question: “How has Donald Trump, the coddled scion of a New York real-estate baron, emerged as a populist hero? How does the beneficiary of a draft deferment due to bone spurs on his feet get away with questioning the military record of John McCain, who endured five years as a prisoner of war? Trump believes that his appeal is based largely on what he calls his heroic lack of ‘political correctness’ but which is more accurately described as a breezy penchant for race-baiting, war crimes, and content-free policy pronouncements.

New York Times columnist David Brooks writes that “now finally — at long last — major Republicans are raising their heads and highlighting Trump’s actual vulnerability: his inability to think for an extended time about anybody but himself.

“He seduces people with his confidence and his promises. People invest time, love and money in him. But in the end he cares only about himself. He betrays those who trust him and leaves them high and dry.”

National Review’s Ian Tuttle challenges his credibility: “Trump believes in nothing except the force of his own personality. Often, it’s not quite correct to say he’s lying, because he never believed anything in the first place. Donald Trump is post-truth.”

Another Times, columnist, Nick Kristof, views Trump as a bad dream: “Is there any scarier nightmare than President Donald J. Trump in a tense international crisis, indignant and impatient, with his sweaty finger on the nuclear trigger?” He adds: “I’ve never met a national politician so ill informed, so evasive, so bombastic and, frankly, so puerile.”

And it’s not just the print people. CNN commentator Sally Kohn said the other day that the media are giving Trump too much attention, and “when he institutes internment camps and suspends habeas [corpus], we’ll all look back and feel pretty bad.”

All this is unfolding in an environment in which many celebrities are also trashing Trump. Miley Cyrus and others have threatened to move to Canada if he’s elected, and Louis C.K. said in a mass email:

“Please stop it with voting for Trump. It was funny for a little while. But the guy is Hitler. And by that I mean that we are being Germany in the 30s…He is an insane bigot. He is dangerous.”

Perhaps, if the noise level gets loud enough, it could sway some voters. But I think it underscores Trump’s appeal, to his supporters at least, that powerful forces are aligned against him—the same forces that they blame for empty promises and economic anxiety.

If Trump keeps winning, these commentators are going to have to examine why he is connecting with the very voters who refuse to heed their ominous warnings.