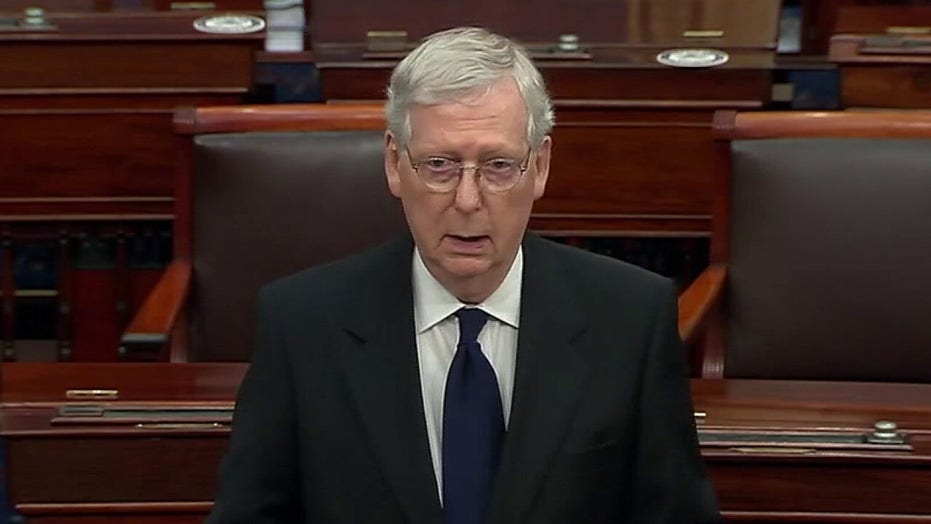 Senate Majority Leader Mitch McConnell said he's "opposed" to including funding for a new FBI headquarters in the next round of coronavirus relief legislation -- even though his proposal released Monday allocates $1.75 billion for the FBI building construction.

McConnell made clear at the Capitol Tuesday he has no intention of fighting for the FBI money, which the White House insisted be included in the GOP bill text released a day earlier. McConnell called the provision "non-germane" to the coronavirus pandemic and compared it to extras in the $3 trillion House bill that he opposes, such a full restoration of State and Local Tax (SALT) deduction or extending $1,200 direct payments to undocumented immigrants.

"Let me speak for myself, I am opposed to non-germane amendments," McConnell told reporters at the Capitol.

"Whether it's funding for the FBI building, or for example, in the House bill, whether it's a tax cut for high-income earners in blue states, or other non-germane amendments in the House bill like marijuana studies or aid to illegal immigrants. When we get to the end of the process I would hope all non-COVID related measures are out -- no matter what bills they were in at the start."

McConnell Monday evening unveiled the long-awaited $1 trillion coronavirus response plan, the collaboration between the White House and the Senate Republicans. Dubbed the HEALS Act, the GOP proposal includes $1.75 billion "for the design and construction of a Washington, DC headquarters facility for the Federal Bureau of Investigation."

McConnell Monday already distanced himself from the unrelated FBI funding and said it was a White House priority. Treasury Secretary Steven Mnuchin and White House chief of staff Mark Meadows were at the Capitol all weekend -- without McConnell -- to write the bill.

Trump said at a news conference last week that he wanted the "very old" and crumbling FBI building to remain downtown, rather than relocate to the suburbs -- which was the plan before he took office.

He said he been "encouraging" the current J. Edgar Hoover Building in downtown Washington to be torn down and replaced with a gleaming new building -- and envisioned a quarter-mile track on the rooftop so FBI agents could work out.

"They had options very far away from Washington," Trump told reporters last week. "And I said to him, 'Frankly, you have to be near the Justice Department.'  There’s nothing better than the site.  The site they have now is better. But they were looking in sites in Maryland and Virginia, in different places, but they would’ve been too far away."

The Trump Administration's abrupt plans to change course from an expected new FBI campus in the suburbs had already drawn the ire of lawmakers, including Meadows, who raised cost concerns about the demolish-and-rebuild plan when he was a GOP member of the House, Federal News Network reported last year.

The Justice Department Inspector General Michael Horowitz announced in 2019 he's reviewing the circumstances around the cancellation of the plan to relocate the FBI headquarters to Virginia or Maryland.

Democrats have accused Trump of wanting the FBI building to stay in Washington for his own self-interest by preventing a new hotel from being developed on the FBI downtown real estate that could compete with his nearby DC Trump hotel.

“They don’t have money for food stamps, but they have money for an FBI building just so that they can diminish competition for the president’s hotel,” House Speaker Nancy Pelosi said Monday of the GOP bill proposal.

But the White House Tuesday stood by the funding request.

"As President Trump has said, the FBI desperately needs a new building and this measure provides critical funding for this project that would keep the building responsibly near the Department of Justice," White House spokesman Judd Deere told Fox News.