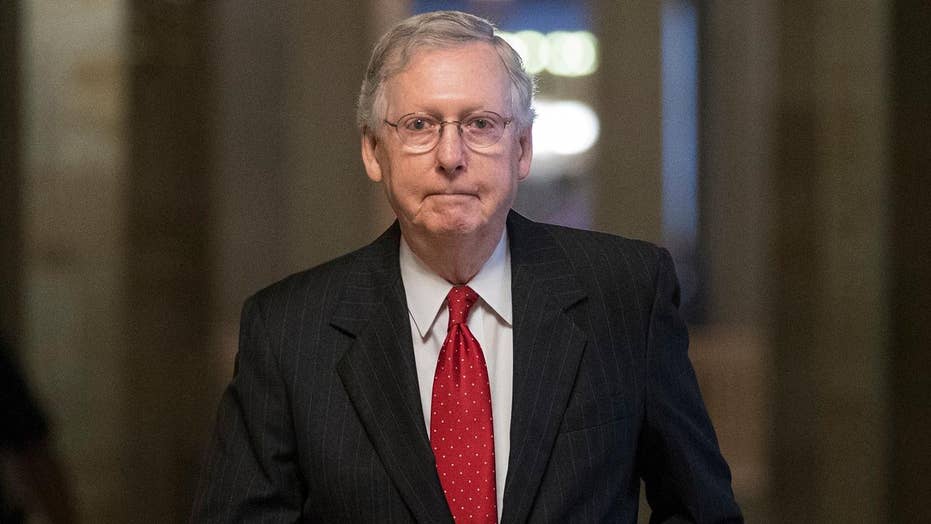 Senate Majority Leader Mitch McConnell, R-Ky., introduced a pared-down version of legislation to repeal ObamaCare late Thursday as lawmakers prepared to launch into a marathon “vote-a-rama” amid intense disagreements inside the congressional GOP.

McConnell's revised plan, nicknamed the "skinny repeal," would scrap key provisions of the 2010 Affordable Care Act, including the individual and employer mandate to purchase health insurance or risk fines. It also suspends a tax on medical devices, denies funding to Planned Parenthood, and allows states to seek waivers from consumer protections in the Affordable Care Act.

"The American people have suffered under Obamacare for too long," McConnell said on the Senate floor. "It’s time to end the failed status quo. It’s time to send legislation to the president that will finally move our country beyond the failures of Obamacare."

Complicating matters is the fact that several GOP senators have said they are only willing to vote for "skinny repeal" on the condition that the House would not approve it and send it to President Donald Trump for his signature. Instead, they are demanding House-Senate talks aimed at producing a wider-ranging measure.

House Speaker Paul Ryan, R-Wis., sent senators a statement saying that if "moving forward" requires talks with the Senate, the House would be "willing" to do so. But shortly afterward, his words received varied responses from three GOP senators who'd insisted on a clear commitment from Ryan.

"Not sufficient," said Sen. John McCain, R-Ariz., who returned to the Capitol Tuesday to provide a pivotal vote that allowed the Senate to begin debating the health care bill, a paramount priority for Trump and the GOP. The 80-year-old McCain had been home in Arizona trying to decide on treatment options for brain cancer.

Sen. Lindsey Graham, R-S.C., initially said "not yet" when asked if he was ready to vote for the scaled-back Senate bill. But later, he told reporters that Ryan had assured him and others in a phone conversation that the House would hold talks with the Senate.

"I feel comfortable personally. I know Paul; he's a man of his word," said Graham.

The final spree of amendment votes could drift into the wee hours of the night -- and make clear whether the GOP-controlled Congress has any path for passing even a pared-down repeal measure.

Vice President Mike Pence is expected to be on Capitol Hill after midnight, in case he's needed to break a tie -- as he was earlier this week.

Republicans have 52 seats in the Senate. McConnell can lose only two Republican votes if all Democrats vote against the effort and Pence breaks a tie.

President Trump, who has been pushing Senate Republicans to pass some sort of health care legislation, tweeted encouragement to senators Thursday morning.

“Come on Republican Senators, you can do it on Healthcare,” Trump said. “After 7 years, this is your chance to shine! Don't let the American people down!”

Senate Republicans drafted their first repeal measure of this session several months ago. But the Senate has struggled to pass any measure that repeals or replaces ObamaCare, even as Republicans have repeatedly watered down legislation to try to win over its divided caucus.