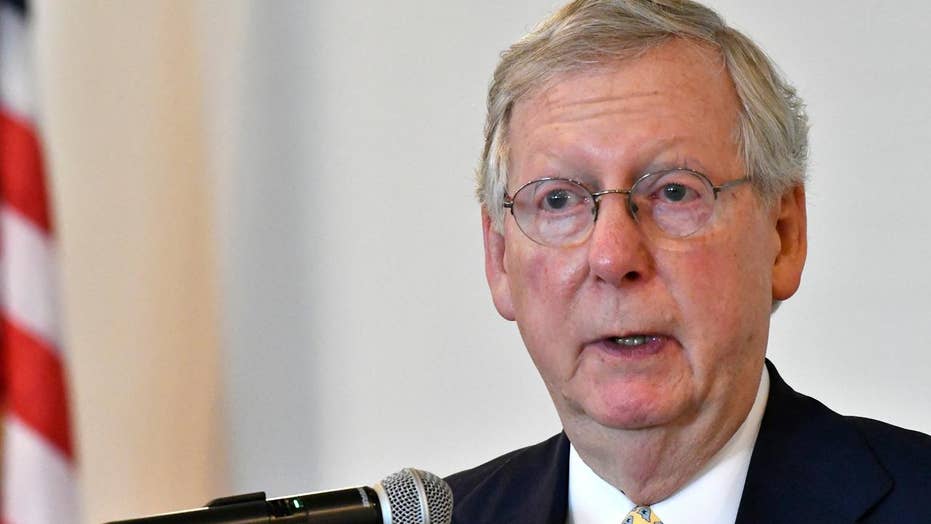 The Senate will delay the start of its annual August recess to give lawmakers more time to work on “important legislative issues” and winnow the backlog of President Trump's pending nominations, Majority Leader Mitch McConnell said Tuesday.

“In order to provide more time to complete action on important legislative items and process nominees that have been stalled by a lack of cooperation from our friends across the aisle, the Senate will delay the start of the August recess until the third week of August,” he said in a statement.

The Kentucky senator and leader of the Republican-controlled Senate has been under increasing pressure, most recently from Trump, to either cancel or shorten the month-long recess as he struggles to get an ObamaCare replacement bill passed in the chamber.

However, McConnell on Tuesday put some of the blame on Democrats for him having to cut short the recess by roughly two weeks. Aside from the health care bill complications, McConnell said Democrats' “lack of cooperation” has stalled the process of considering nominees.

Trump made a similar argument earlier in the day, tweeting, “The Senate Democrats have only confirmed 48 of 197 Presidential Nominees. They can't win so all they do is slow things down & obstruct!”

“This administration has sent fewer nominations to the Senate than in recent memory,” said the New York Democrat, who also argued that Senate Republicans have problems with their ObamaCare overhaul bill, not with a looming deadline.

“It's the substance of the bill,” he said. “Two weeks are not going to solve the problem.”

The call to shorten or cancel the recess drew early support in the GOP-led House, particularly from members of the conservative House Freedom Caucus. However, House Speaker Paul Ryan, R-Wis., has yet to make an announcement about his plans.

“We call on House leadership to do the same,” caucus members said after McConnell's announcement. “There are too many unresolved issues before Congress … to leave Washington before the people’s work is done.”

The Senate tentatively had been set to go on break on July 31.

Senate Republicans over the recent July 4 recess worked on an ObamaCare repeal-and-replace measure, after failing to get enough support to even vote on the measure before leaving Capitol Hill last month.

However, they had hinted that a vote could come as early as next week.

In overhauling ObamaCare, the GOP-led Congress is trying to give Trump his first clear legislative victory, nearly six months after Republicans took full control of Washington.

The House in May passed its plan to overhaul ObamaCare, the 2010 health care law faltering under rising premium costs while offering Americans narrowing policy options.

Meanwhile, Congress has other pressing issues, which include passing tax reform and a budget before the Sept. 30 funding deadline.

A group of 10 GOP senators that asked McConnell in a June 30 letter to shorten or cancel the recess said after the announcement: “We are glad leadership took our concerns into consideration. It is time to get results for the American people.”

“I don't think it's in half as much trouble as the media wanted to be in,” he told “Fox News Sunday.” If anyone can get it done, Mitch McConnell, President Trump working together with a Senate can. … Whether it'd be before August recess or during August recess, the president expects the Senate to fulfill the promises it made to the American people.”

Meanwhile, none of the 12 annual spending bills financing federal agencies is finished.

And disagreements have slowed work on a tax overhaul. And no one knows what bargains will be needed to assure autumn passage of a bill extending government borrowing authority and avoiding a crushing federal default.