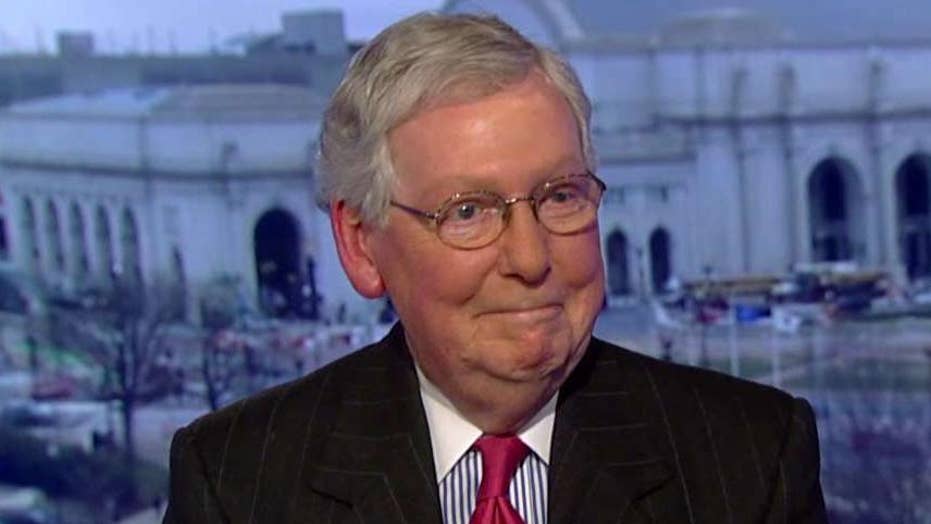 Sanders' plan would also lift restrictions on government health insurance for people in the country illegally, and revoke longstanding restrictions on taxpayer-funded abortions.

"Not as long as I'm majority leader. It ought to be called Medicare for none," McConnell said. He said "180 million Americans would lose private health insurance. ... You want to turn America into a socialist country, this is the first step. That, coupled of course with the Green New Deal, which would eliminate a whole lot of jobs.

"I think what we're seeing here is full socialism on display in the Democratic primaries for president."

McConnell acknowledged that the Green New Deal test vote he called last month was essentially a "show vote," designed to demonstrate that no Democrats were willing to go on record supporting the sweeping program to remake the economy in the name of fighting climate change.

Once in a while, McConnell said, it's appropriate to make it clear where everyone stands -- especially given that Democrats themselves had introduced the Green New Deal resolution in the Senate.

At the same time, McConnell noted, climate change is occuring. But, he said, technological solutions, rather than a total economic transformation that could damage millions of lives, is the ideal approach to various environmental changes -- including those that could be partially beneficial and entirely unrelated to man's industrial activity.

The Trump administration's own scientific findings state that unabated climate change would likely shrink the U.S. economy by the end of the century.

McConnell said Amy Klobuchar, a relative moderate 2020 Democratic contender who has called for a public option instead of universal Medicare, would similarly destroy the private insurance industry.

Sanders has floated the idea of passing Medicare for all using a budgetary procedure known as reconciliation -- it requires only 51 votes for passage -- if Democrats are able to retake the Senate.

But McConnell, who last week pushed a precedent change through the Senate to speed the confirmation of lower-court judicial nominees, told Baier that the Senate should be a deliberative body -- and that means satisfying a 60-vote, filibuster-proof threshold for major new legislation.

Asked by Baier where the GOP proposal on health care is hiding, McConnell said Republicans favor covering Americans with pre-existing conditions, and called for reducing the costs of prescription drugs and co-payments while making other "modest fixes" to ObamaCare.

Separately, McConnell dismissed Democrats' attacks on the integrity of Attorney General Bill Barr, noting that he was confirmed unanimously to the same position decades earlier.

But McConnell stopped short of embracing President Trump's attacks on the FBI investigation into Russian meddling in the 2016 elections as a "coup" and attempted "treason," saying only that Trump "should be applauding" Special Counsel Robert Mueller's findings.

Sanders is quieting critics who questioned whether he could recapture the energy of his upstart 2016 campaign, surpassing his rivals in early fundraising and establishing himself as a front-runner.

With Sanders less than two months into his second White House bid, no other declared candidate in the crowded Democratic field has yet amassed so many advantages: a $28 million war chest, a loyal and enthusiastic voter base and a set of clearly defined policy objectives.